I am, without a shadow of a doubt a lark. I am awake and chirpy at dawn or much earlier.
At the beginning of January I was up early, about 4.00 and looking out of the kitchen window saw what I thought was a shooting star zipping across sky. (I now know this was part of the Quadrantid meteor shower)..

It was a wonderful sight and I opened the door to see if there were any more. No more shooting stars but there was some very loud singing from the nearby tall hedge.

Loud Night Singing
Since then I have been much more aware of a night singing bird (or birds), and it seems to be robins.
Which does make sense because there are many robins here. Two patrol the garden every day (which I now presume are a pair, see below) and are the first to the scraps and seeds we put out in the morning.
I don’t know much about birds really so, to me, this was very interesting.
From Ask an Expert on the RSPB site

Robins are one of the few birds that hold a territory throughout the winter so continue to sing when the majority of other birds have stopped. Robins are often one of the first birds to start singing in the morning and the last to finish in the evening so are used to being active in low light conditions. In places where there are street lamps or other artificial light sources, robins can be triggered to start singing because it does not get completely dark. Other disturbances, like a loud noise or movement, can also start birds singing in the night.
Katherine Stevenson RSPB.

and from the delightful site Garden Birds.co.uk

….they can usually be heard singing their melodious warbling song from strategic perches, often quite high up; it sounds like “twiddle-oo, twiddle-eedee, twiddle-oo twiddle”. In the winter, it can sound wistful, some say mournful, but around Christmastime the song becomes stronger and more passionate.

Robins, both males and females, hold their own separate feeding territories in the winter, which they defend vigorously. By around Christmas, many will have paired up. Initially, they do not spend much time together, merely tolerate one another, but will remain together until the following autumn moult.

I also learnt this, something I had never really noticed!

“Robins are rarely seen or heard during midsummer (July-August) when they are moulting and become rather retiring.”

I read that some people find the nocturnal serenade annoying… but I think it  is very beautiful.
There is a black bird singing outside as I type. Even through the closed window I can hear it.
It’s quite lovely. In the morning now it is getting light at about 7.30 and there are a couple of blackbirds and robins waiting hopefully by the hedge.

We watch them along with a variety of other birds who come to the feeders. We are seeing more and more now and they seem to arrive at different times of the day. The blackbirds and robins are the first, the little longtailed tits visit in gangs later in the day as do the starlings. Bird list yesterday: Chaffinches, Robins, Great tits, Longtailed tits, lots of Blackbirds who all squabble, a Wren, a beautiful pair of Wagtails who come every day, 2 Ringdoves, Sparrows, Blue tits, Starlings, a Magpie.

I made a quick sketch on a torn out bit of paper this morning in between bee drawing.  The robin was sitting a stick outside my window. I intend to get to grips with painting birds later this year. 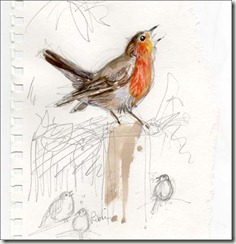 Go to Brett Westwoods page on the BBC where you can hear its pretty song with lots of others and don’t forget the RSPB’s Big Garden Birdwatch.
Watch for one hour on 28 or 29 January 2012 and send in your sightings!

At last, the year is on the turn and I am feeling optimistic about 2012.

I am hoping for a mild Christmas so that I can continue painting the shed, but if it’s cold and wet I shall be inside reading my Christmas book “Creating a Forest Garden” by Martin Crawford.

True, it is slightly ambitious for my mud patch but I am optimistic about that too.
I have just finished Marty’s honey bee for her site Beezations,
Her bees, she tells me, are shivering upstate! I sympathise. Marty, I wish you and the girls well for 2012. 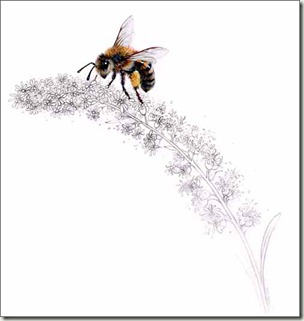 And so, bee friends, bee converts and even those still not quite sure; while you are browsing the garden catalogues please add a few seeds for bees to your basket, order an early willow, some late Michelmas daisies, or plan where to put that bee house.

Your reward will be an exuberant, productive and buzzing garden.. and what could be nicer.

I wish you all Season Greetings and thank you for all your support, on the blog, through your kind comments and emails, for buying prints, postcards, originals and BUZZ books.
You have all helped keep me and the bees going and make the ups and downs of 2011 end on a high note. 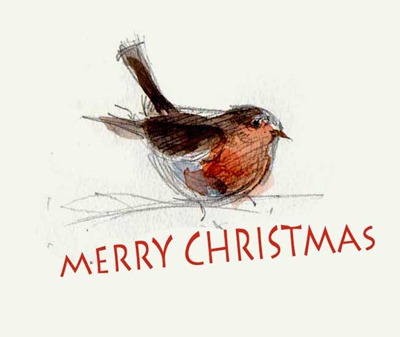 We woke to snow. First snow may not really register with many here, especially after last year’s bitter Winter, but for us, soft, sun loving, warm climate returnees it is the first real snow we have seen for many years.
It’s strange stuff, it muffles and chokes and clogs things. It turns things into something else, transforms places into somewhere else. The white grass is quite shocking. The sky is darker than the land. Things don’t look quite right. Starlings, crows and rooks look even an blacker black … and I am reminded of Robert Frost’s curious poem. A favourite of mine.

The way a crow
Shook down on me
The dust of snow
From a hemlock tree
Has given my heart
A change of mood
And saved some part
Of a day I had rued. 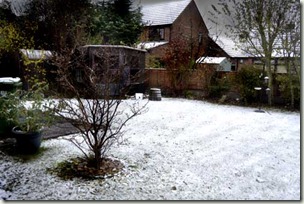 The other day I had taken down 3 small bird boxes that had been abandoned in every way .. left high and dry and disintegrating up on the side wall.
I am going to give them some TLC and replace the perches.
They are standing by the conservatory door waiting to be attended to and this morning their little roofs covered are with snow. I can see them from my work room, so made a sketch. 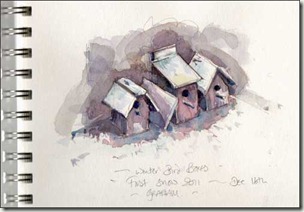 Then I thought this was a rather nice image, so painted it again and added a robin.
I was watching the robins yesterday and had made a few sketches. 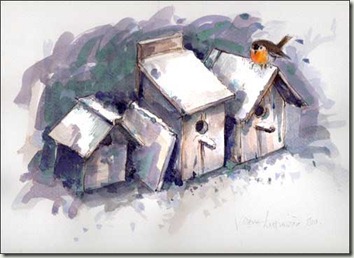 It’s lunchtime now and all the snow has gone…

I have been tidying up my work room today and found some sketches that I made last week.
I had been to Leu and sketched these birds, then had got sidetracked by bee stuff and forgot all about them.

Also I had no idea what they were.  It was a nice sunny day after all the cold weather and I heard the birds before I saw them. Flocks, of what seemed like hundreds, were wheeling round and round, screeching and chattering, something that I haven’t seen here at the Gardens before.

The action appeared to be centered around the huge camphor trees which line one of the walkways and as I came closer I could see the birds were busy eating the little black berries.
They then flew off to the nearby path to drink from a puddle of water and then rushed back to the tree again for more berries.
You can hardly see the Robin sitting on the branch, but you can see all the camphor berries! 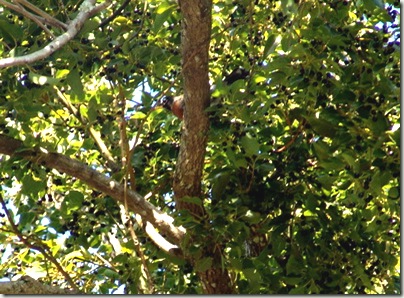 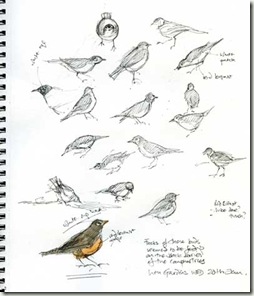 I know that my USA readers will probably be aghast at my ignorance, but please don’t forget that I am a Brit, so the word “Robin” to me means a little chirpy little bird  that comes and  sits on your wheel barrow in the garden.
These American Robins are big! …and I now know they are members of the Thrush family

But what is most interesting to me is that I realise now I was probably seeing these nice little birds getting ready for a northerly migration, stocking up and getting fit and fat, although some do seem to stay in their own neigbourhood over the winter.
While I was researching I found this website: American Robin,Journey North where you can track the Robins’ journey north and participate in recording their progress.

So, three little Heralds of Spring especially for my northerly, ice and snow bound, blog readers. I want you to know that the Florida Robins are looking well and will soon be on their way!! 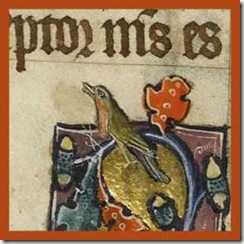 For seven centuries this little robin has been singing his heart out from the pages of the magnificent Macclesfield Psalter.

To all my faithful blogging friends and readers;  May your robins be singing for you wherever you are.