I knew I was going to repaint this one, so here is this serious little mason bee again.

I have to be completely frank .. she is not the most elegant of bees.

The female bees have rather large heads, which plus the accompanying horns give her a rather pugnacious appearance.
She will use the horns to shape the mud for her nest.
I have written about the Osmia Orchard bees both UK and USA before here, so I am not going to say much more and there is oodles of info on the internet.

Solitary Bee Blog
One delightful and fascinating blog is from Paul at http://solitarybee.com/blog/. Paul lives near Paris and charts his life with his solitary bees and his successes and failures in trying to increase their numbers. He talks about his concerns, his observations and conclusions with affection and humour.
He doesn’t have fancy bee nests, some are as simple as beer cans and rolled paper.
He is a diligent and resourceful carer. I particular liked his use of a black socks to keep out the light and prevent his cocoons from premature emergence (from an early post here).
There are some short films with French bird soundtracks and lots of info about the care of Osmia rufa and cornuta
I am quoting a piece from his intro which is interesting, not only because of his appreciation for and understanding of these lovely bees but for the curious attitude of the French.

“According to the experts, each bee can pollinate up to ten times more flowers than a honey bee but they are in no way aggressive to those in their midst. Over here in France, they are often misunderstood by people looking on; where my ‘colony’ of bees live, the locals here refer to them as lazy bees because they don’t produce honey (and thus appear to be of no exploitable value). For me however they are a source of inspiration. What they achieve in their focused short existence leaves the world in a much better shape – in 2007 our orchards were full of fruit.”

I hope you are getting your message across Paul.

The Painting I changed the painting, made her a little smaller and daintier, and, in tribute to their unsung work in the orchards, she is now flying up towards apple blossom. .. I think this will also be the title of the painting…

There Will Be Apples. 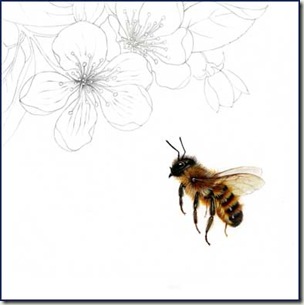 While making some more notes on British bees, I was interested to read more about the funny little horned, female Osmia rufa.
The Osmia family in general are a really delightful bunch, not only hard working pollinators for your fruit trees but gentle too and ideal bees to keep in the garden.

I painted Osmia lignaria, the Blue Orchard bee for Deborah but that particular species is hornless.
The “horns” in question are two small protuberances which can be seen (if you get very up close and personal with the bee) just above the mandibles.

It seems they are used for shaping the mud which this clever little bee uses to build her nests, hence the common name “mason bee”.
The male O rufa on the other hand sports a fine white “moustache” and has longer more elegant antenna than the female. 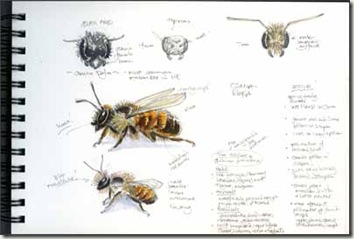 I also remembered  that I had a specimen of Osmia cornifrons which Karen Strickler at Pollinator Paradise had kindly sent me along with O lignaria.

This bee also has the curious horns on the female’s face. It’s not a native USA bee but was introduced from Japan in 1977 to help with orchard pollination. With the help of a magnifying lens I was able to make this drawing of the female cornifrons’ head complete with horns. 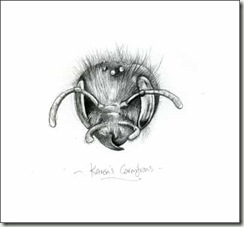 She is much hairier than her rufa relation. Then a couple of studies of the Osmia rufa… cute male head at the top and female at the bottom. . 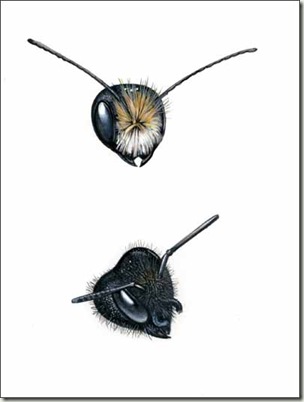 The female also has huge jaws which she uses to collect mud for the nest and presumably to make the nests too. I don’t have time to write more today but will return to these nice little bees very soon with more info and more drawings….