With this new garden I have decided to try to be systematic. I somehow know it will not last but it’s worth a try.
So I have started to keep a list of the plants already in the garden and the plants/seeds I buy. I would like to think I will carefully note their position, their progress, what I feed them with, cropping yields, (there’s optimism for you).. and of course bee attractivness etc

So I looked around for a notebook. I think I’ve mentioned before my aversion to new note books or sketchbooks and so the part-used old notebook tucked into the seed box at Dad’s house seemed both apt and appealing.
It’s a small 6 x 3 3/4 inch blue hardback with a grey cloth spine.
One of those anonymous note books without a makers name which you used to find in the old fashioned stationers.  A great size to put in your pocket. 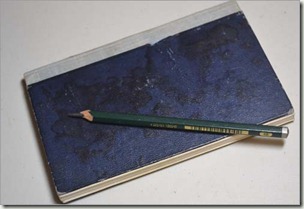 At the front there are a few pages of notes from a holiday in Madeira.
Mum has noted the children running home from school, Dad has made lists of costs.
At the back are notes detailing “Good Local Walks”, plant lists and plans for the garden i.e., “move white potentilla to west fence,  eliminate wild onion weeds” (sorry Mum,  I know they are still there). The earliest entry is 1987 and notes have been made by both Mum and Dad. 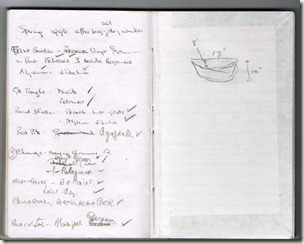 Mum and Dad’s notes: A list of plants and a page entitled “Spring 1998, after a long (cold) dry winter” with an enigmatic small end board sketch of something measuring 8 x17 x10 inches.

My first notes in the book with sketches of the garden. 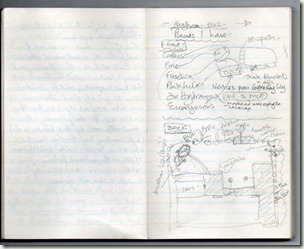 As I was entering my first list, “Plants I Have”, I was also listening to the radio, to the fascinating BBC’s History of the Written World.

Melvyn Bragg was discussing how important writing was and possibly still is, to science. “how the invention of writing made the scientific revolution of the Enlightenment possible “ and how the note books of scientists were key in the processing, recording and passing on of information and ideas.

They were discussing Newton’s 1665 notes made in his twenties, of an experiment on his own eye which involved pushing a bodkin in between the eyeball and the bone and changing the shape of the eye.
On the BBC website there is Newton’s page …how wonderful. Isn’t the potency of the handwritten note and drawing extraordinary?
Even looking at this image on a computer screen sends a shiver up my spine. Prof Simon Schaffer describes the note books as “paper laboratories”  a marvellous description. 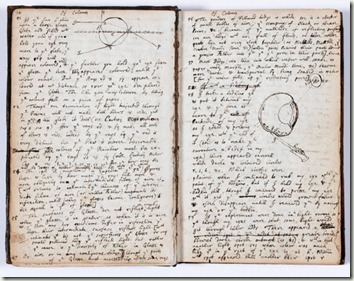 “I took a bodkin and put it between my eye and the bone as near to the backside of my eye as I could: & pressing my eye with the end of it there appeared several white, dark and coloured circles.”

You can listen to all of “The Written World”  episodes on BBC Iplayer.

I can’t, unfortunately, make a comparison between the content of these notebooks, I can only find a comforting similarity in practice. Newton used both ends of his notebooks.. as did my parents.

My own inconsistency is so great that I use note books randomly, middle, end, upside down and sideways.. but there is very seldom anything on the first page.
I shudder to think what that might signify. The University of Cambridge is making  Newton’s Papers available online see here for a wonderful, absorbing and humbling look at the work of an exceptional man.

There is, delightfully, a wealth of other inspirational notebooks on line. Here is Darwin’s famous “tree” from his Notebook B. 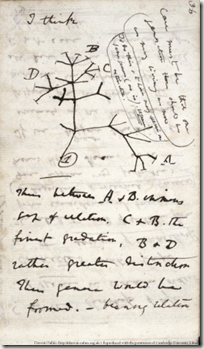 This note and sketch “depicts the branching system of descent with modification which he realized could explain the relationship between different species in the same class or family.”  from Darwin Online.

And one of Leonardo’s notebook pages from the British Libraries, Turning The Pages site  where you can view manuscripts and note books from composers writers and artists etc. 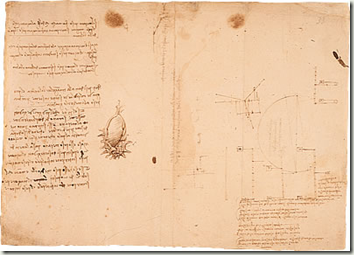 This page is from around 1508 “This double page forms a single sheet containing notes and diagrams relating to balances and weights, with a sketch of a cockleshell in the margin”

I embrace the internet and computers for all the wonderful things they have made possible, especially enabling me to access these fabulous documents from my desk….but I hope people still continue to jot down their lists and thoughts in notebooks in their own hand and not on the impersonal keyboard.

A world without hand written notes would be an anodyne and soulless place.