Bumble Bees steal nectar.. yes, it’s a shocking fact. I had no idea such underhand behaviour went on in the seemingly righteous world of the busy bee.
Bumble Bees need nectar for flying fuel and as the different species of Bumble Bees have foraging ranges of between 5 and a tiring 20 K,  if a bee takes a bit of short cut for refueling who can blame them.
They do this by cutting small holes with their strong mandibles in the base of tubular flowers which would otherwise be difficult for these bulky bees to access.

This is good for the bee but not good for the flower. The point of having nectar for a flower is to lure  the pollinator, bird, bat or bee, to seek it out and get a good dusting of pollen from the anthers in the process.

The pollinator then moves on to redistribute pollen and fertilize the next flower. Not much of a problem for a little patch of clover but on a grand agricultural scale, non fertilization of a crop could be disastrous.

So it was because of this nectar robbing behaviour that Thomas Belt in 1878 was moved to recommend sending Bombus lapidarius rather than Bombus terrestris to New Zealand. Both he and Darwin had noticed the lazy behaviour of Bombus terrestris…again from “Science Gossip” in 1878…

I once watched a small patch of red clover for upwards of an hour. Both of the above species came to it; Bombus terrestris, without exception, buried its head amongst the flowers, and made holes at their base, or sucked the nectar from those already made.

Bombus lapidarius just as invariably went to the opening of the flowers, although the most of them had holes made by the other species.
Bombus lapidarius has a longer proboscis than B. terrestris, and this is probably the reason for the different way in which they go to work. Early in the summer I have seen young individuals of B. terrestris sucking the nectar from the flowers of the scarlet runners in a legitimate manner, but they soon learn to make by preference the holes at the base.
The successive steps in their education may be watched from their first hesitation, awkward attempts to do this to the instinctive-like facility they attain later on in the season.

For me the most interesting aspect of this account is that the Bumble Bees seem to  “learn” this behaviour.
On discovering flowers with holes, they will copy and start to bite similar holes allowing them to “steal” the nectar.
Darwin had observed that “all plants must suffer in some degree when bees obtain their nectar in a felonious manner by biting holes through the corolla.”
However more recent research has found this not to be such a huge problem. 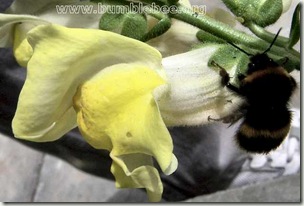 Photo from the very excellent site Bumblebee.org from which I keep quoting. It is the very same Bombus terrestris caught in the act, stealing nectar from a snapdragon.

Do visit the site and read the best explanation of nectar robbing I have seen at the above link.

We are now used to hearing reports of bees being transported huge distances to aid in crop pollination but I had no idea that this was happening quite so long ago.

¨In 1885 liberation of bumblebees in Canterbury (New Zealand) specifically to pollinate red clover made agricultural history: it was the first time an insect had been deliberately released to pollinate a particular flower. “

This is from a completely fascinating article by David Sheppard at Bumblebeeconservation.org, read it here.

He tells the sometimes poignant story of efforts to send the little hibernating queens out to fertilize the clover crop. Although clover was growing well, there were not enough local pollinators to fertilize such large crops, so costly new seed was having to be bought from the UK each year.

The first attempts at transporting the bees failed and they died, unable to survive the heat and humidity of traversing the tropics. Eventually, with a bit of bribery, they succeeded.

“Mr Nottidge, a banker of Maidstone in Kent, offered a bounty to workmen who were cleaning out ditches for every bumblebee they could find. These 282 fertile hibernating queens were shipped on board the new iron steamer ‘Tongariro’ which was one of the first steamships to be built with a refrigeration unit.

The voyage departed from London in December 1884, calling at Plymouth, Madeira, Capetown and Hobart, arriving at Wellington in January 1885.
The consignment was taken to Lyttleton by coastal steamer and arrived at the Canterbury Acclimatization Society’s gardens  on January 8th. 48 bees were still alive

The hazards were not over for the bees as local hostility to the new immigrants caused nests to be destroyed, and as always the introduction of a new species can have its problems.

However there are now 4 Bumble Bees species busy helping with the crops in New Zealand. Bombus hortorum, Bombus subterraneus, Bombus ruderatus and even the nectar stealing Bombus terrestris.

Bumble Bees back to the UK 2009 The rather neat foot note to this is that the short haired Bumble Bee, Bombus subterraneus now extinct in the UK is to be brought back from New Zealand to boost our native population.

“If we’re successful, this will be the first time a species has been reintroduced to the UK by bringing back direct descendants of the extinct population.”

Read more from the BBC here.

The drawing here is another study of the first UK bumble bee I brought back in May. It is, I am sure Bombus terrestris because of the sandy coloured part of its tail. 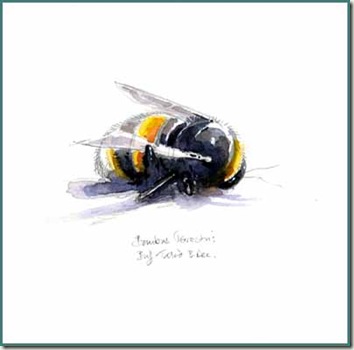 This one was already dead, but in answer to the question “why do I sometimes find bumblebees apparently lifeless and bedraggled on the ground in the morning”,  Laura Smtih’ s wonderful Bumblebee.org puts us right again.
Hmm..this strikes a chord with many of us female humans too.

“I get a huge number of emails from people asking me why their bees are sick, when in fact they are just males who have spent the day chasing queens and drinking nectar and then stayed out all night.
Sometimes it rains and they get soaking wet, but they will recover once they drink or get warmed up by the sun.
Sleeping inside a disk or bowl shaped flower is a good strategy for these bumblebees as research has shown that the temperature at the base of the bowl, near the source of nectar, can be as much as 10 °C higher than the surrounding air temperature.

So just put your bedraggled bad boys in a saucer in the sun and help them on their way to ensuring the survival of our delightful and useful Bumble Bees.