I mentioned the hollyhocks at Twigworth yesterday.
One, particularly, was immensely tall, we estimated about 9 ft. The hollyhock, Alcea rosea is so beautiful and a real favourite of mine.

Their long towering spikes of flowers and little round seed pods were constantly swaying in the wind. This interestingly made it quite tricky for the bumble bees to land. But land they did, working round the central stamen and getting completely covered in white pollen. 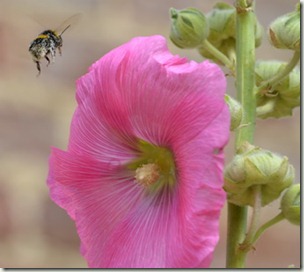 Early one morning before opening up I sat on the lawn and made a measured sketch. I noticed that a very still little white tailed bumble bee was curled round the stamen of one of the flowers.
I rather think he had been there overnight. I
was a good half hour and he was still there when I left. I have seen them here sheltering under teasels for the night.

Bee in Hollyhock… not easy to see him curled round in the middle. 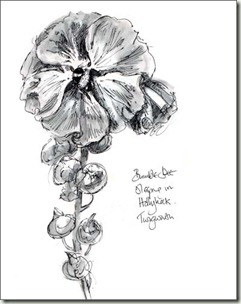 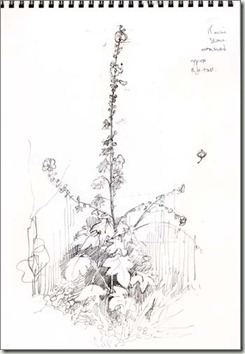 Later a quicker sketch with black and white pens on toned paper. 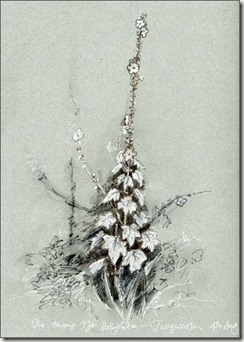 Back in the studio in between talking to the visitors I drew a pod and its little adjoining leaf. The pods are delightfully furry.
It’s a bit like the old “Leaf of the Day” times! I still have to draw the seeds but have brought a few pods back with me, along with some honesty.
Nice! I am looking forward to drawing them. 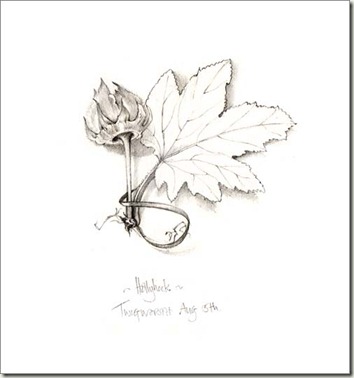