In the darkest deepest wilds of Leu, there is a tree that you would never normally see. You have to go “off path” to get to it and once you arrive at the tree trunk there is nothing to see, except the trunk, which is not out of the ordinary at all. You can’t see the top easily because, if yesterday’s gumbo limbo was tall this is much taller, its crown waving above the nearby palms. I would not have noticed it, except for a fallen pinky white flower that was lying on the floor of the forest. From a distance it looked like some kind of mushroom and I was interested because since the rains started there have been many exciting mushrooms and fungi springing up. Braving extensive spider’s webs and the chance of disturbing an innocently snoozing snake ( what I do for this blog!) I found, not only was it a rather beautiful flower, but it also belonged to the wonderfully named Midnight Horror Tree. The ticket was hard to find too, buried in leaves and soil, not many people come this way . 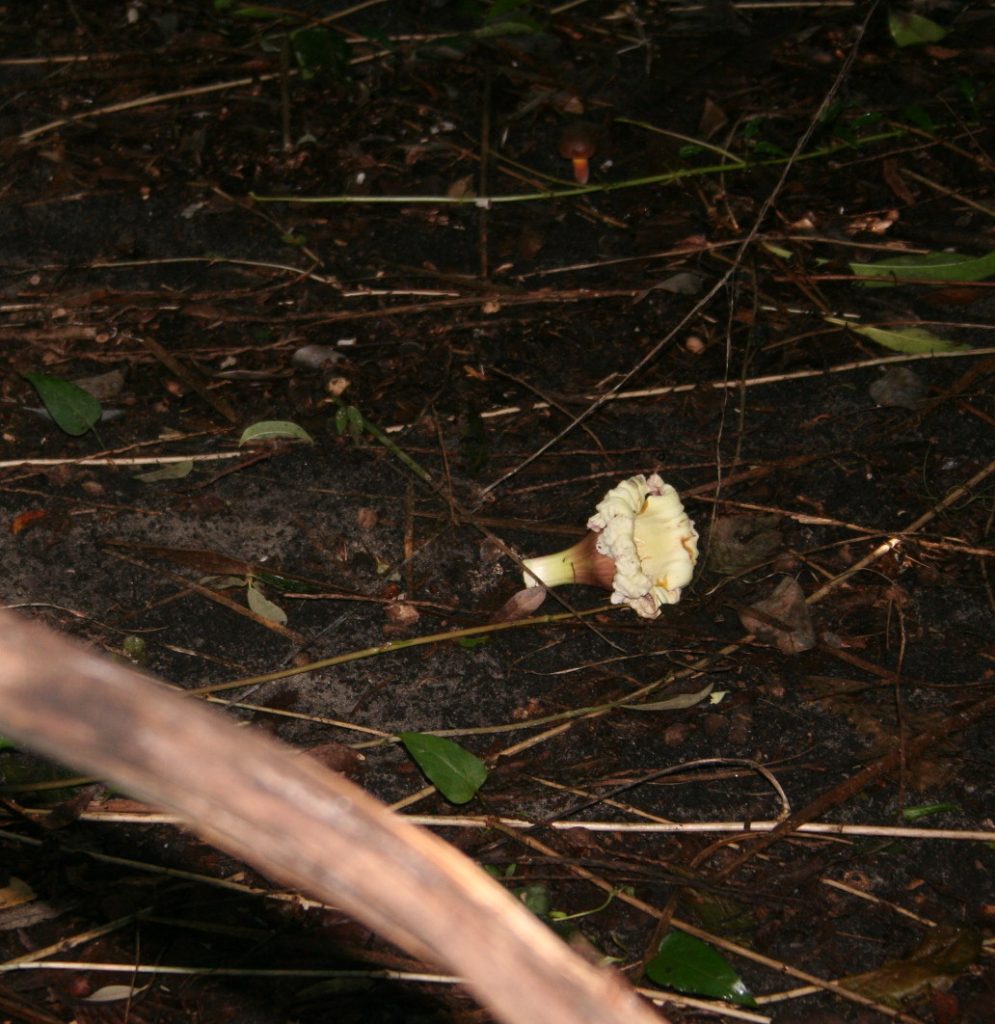 So this is the Midnight Horror Tree, Broken Bones Plant, Tree of Damocles, Oroxylum indicum.
Why does it have this terrible name? I was hoping for a nasty poison or wailing spirits of the dead or something equally ghoulish. There is nothing quite so bad. However this tall tree develops spectacular, meter-long curved pods which are held high up above the leaves. 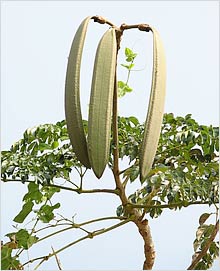 They look like curved scimitars and on a dark windy night, rattle and sway, ready to fall and pierce the unsuspecting traveller or spear the misguided sleeper who has chosen this particular tree for shelter. They are quite alarming and hence the Sword of Damocles name. 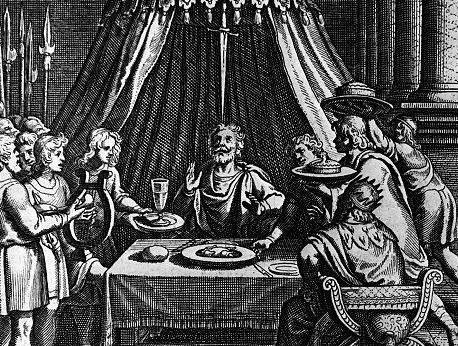 The analogy with the Damocles story is interesting as, at first, Damocles was unaware of the sword hanging over him, busy as he was, enjoying the pleasures of a great man. Only when he looked up did he see the danger and decide a simpler life was better. Like the sword these pods, carried high up in the tree, would not at first be noticeable to a passer by.
Having this thought in my head, I would not be inclined to sleep under these precarious pods, hanging by their single horsehair, the unease would be palpable. 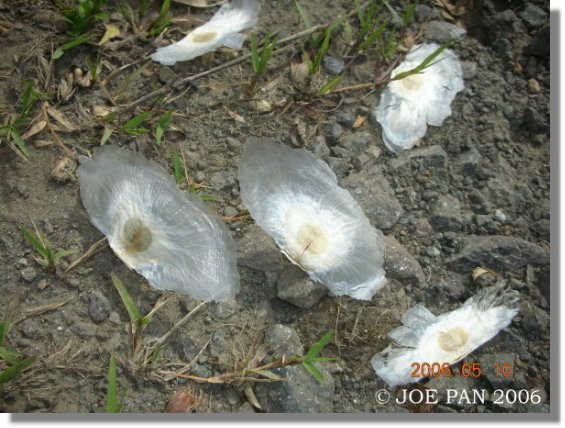 This photo, others and more info from Joe Pan’s Malay blog here

Contributing to the image of “horror” might be the strange white winged seeds which are contained in the pods, they are like little white butterflies which could glow a ghostly white in the moonlight, looking like disembodied eyes perhaps, and apparently the huge leaf stems fall at the end of the season to form piles of ” broken bones” at the base of the tree. The big flowers which are eaten in Thailand, only bloom at night, and are pollinated by bats, an additional macabre touch I suppose. 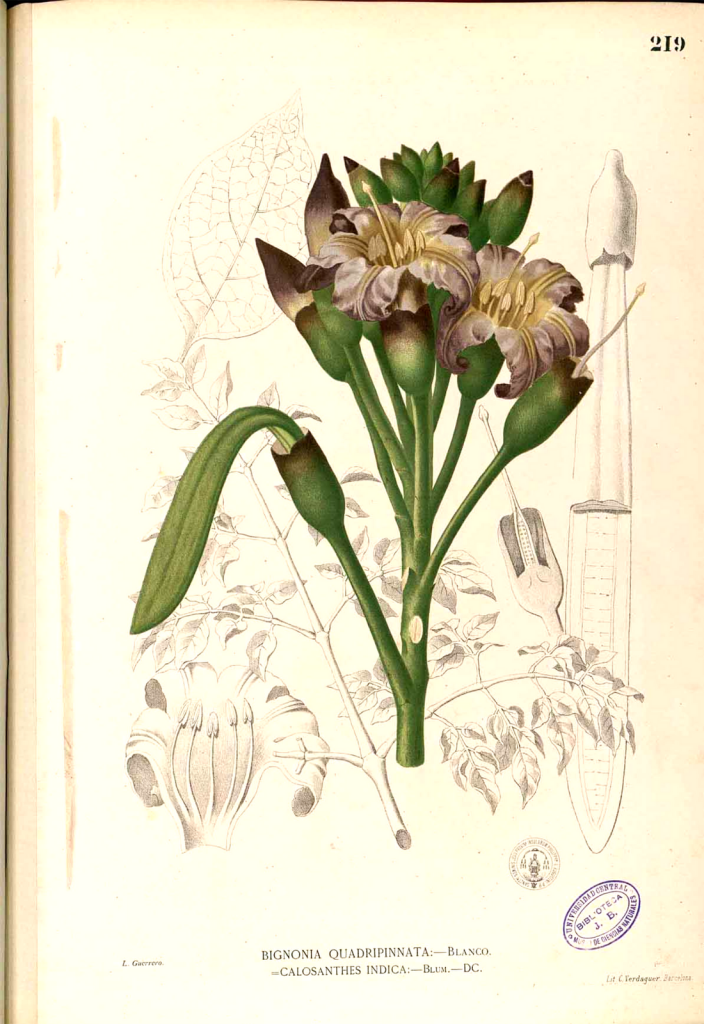 However this bad name is hardly justified, as in reality this good tree is a very useful medicinal plant. Amongst other things, the seed contains oils and flavonoids “One of the main flavonoids, chrysin, has been the subject of much study; among its potential applications is to alleviate anxiety” Anxiety no doubt caused by being in close proximity to the tree.
And a curious footnote, rice farmers use the pods and leaf stalks to dispatch paddy field crabs which they then presumably eat.

It is hard to see much of the tree at Leu as it is right in the middle of a densely wooded part of the garden, but eventually I noticed a flower spike right at the very top. You can see it sticking out at the left below. 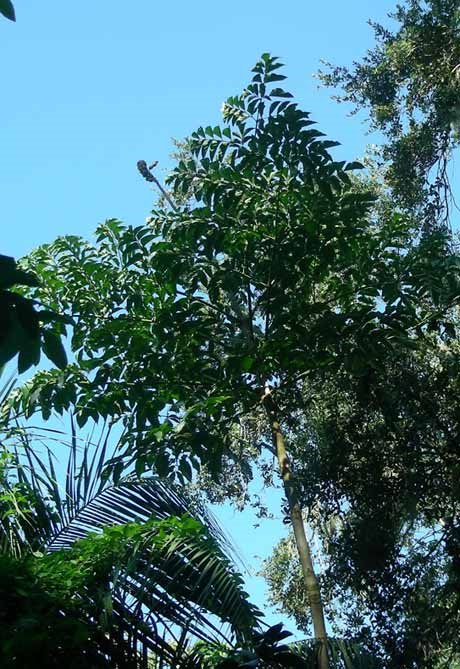 This photo I took with small digital zoom is not much more than a silhouette, but you can see the remains of the flowers and on the right at the bottom there are the beginnings of a pod. Now these pods will be something else! I shall keep coming back to this tree, sword of Damocles or not I will be there when they fall.. 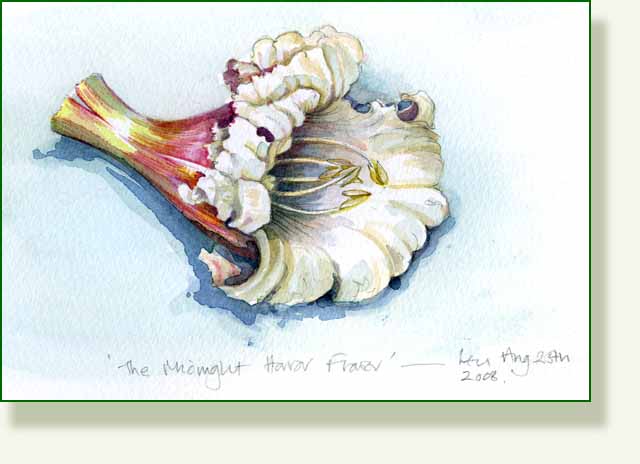