I had a really lovely day today with a few of my group at Easton Walled Gardens. The sun shone and everything is growing. I came home and went out into the Garden and for the first time this year saw my bee house springing into life. Just a few beautifully coloured male Mason bees coming in and out of the tubes. Their newly hatched colour glow. I am so very pleased to see them. 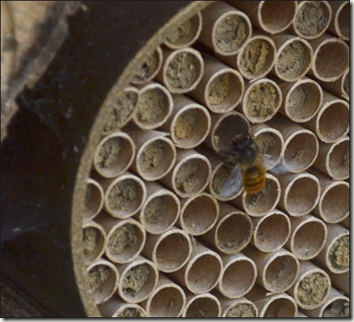 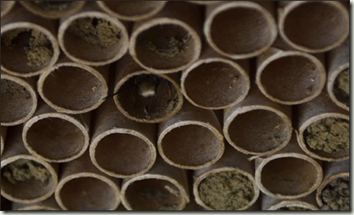 And to add to that a sighting of foxy little female Tawny Mining bee prospecting around the base of the lavender and a few days ago I saw another beautiful dark russet and black bee which I now think just might be an Osmia cornuta… no photos yet..

And of course having seen the male Hairy Footed Flower bee.. the females have arrived they have to be one of my very favourite bees. What busy and purposeful girls they are. Not easy to photograph as they barely stop at each flower. 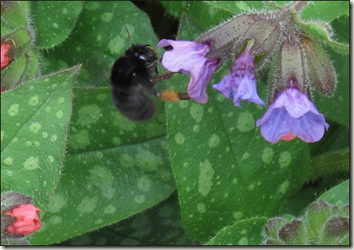 Hopefully better photos of all to come. But my joy is unconfined to see them back! Wild things …you make my heart sing! 🙂

The Natural History Museum list six bumblebees, “The Big Six” as being the most common bumble bees in the UK. But I think very soon they will have to add another because although this pretty bee is a relative newcomer to the UK, it is spreading fast. It’s the Tree Bumble Bee, Bombus hypnorum  which was first recorded in the UK in 2001.

It has very distinctive colouring, a ginger thorax and a  black abdomen with a bright white tail. Someone said it looks as though it has been dipped in white paint..it’s true. 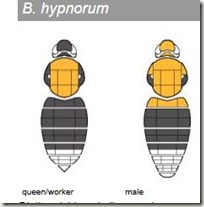 I saw it last year in London and I have seen them everywhere I have been this year.
First in Dad’s garden in March.  Then at Easton on the 15th April buzzing around the plum blossom on a sunny wall. 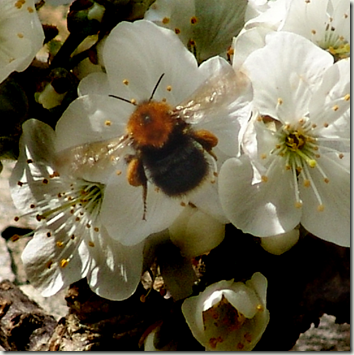 Then today I walked up to the Church in the village and saw one feeding on an arching bony cotoneaster, its flowers barely noticeable, which was crouching over one of the old graves there.

It’s a lovely and slightly unkempt churchyard. I like to wander around there. The wild flowers and unmown areas are great for bees. 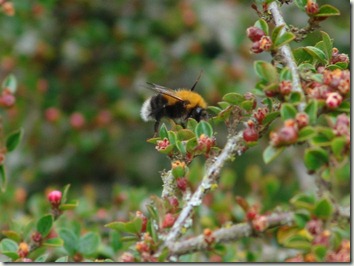 The hypnorum above, accommodatingly showing its pretty white painted tail, was waving a warning leg at a little B Pratorum who had come too close.

The diminutive flowers of the cotoneaster were humming with them. They are tiny and so bright, a brilliant acid yellow as opposed to  the tawny yellow of the hypnorum. I wonder if they are newly hatched. They were very busy and whizzed about rather too quickly for me to get a good photo. 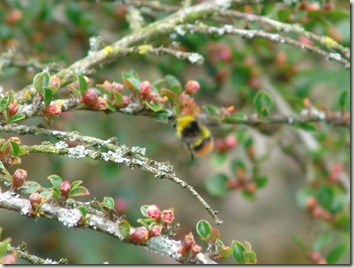 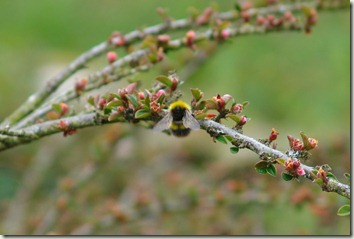 They are really delightful little bees. I had planned to get a painting of the Hypnorum done for this summer’s shows because people will be able to see them in many areas of the UK and they are very pretty.  I have just sketched it out for now and plan to show it feeding on the early plum blossom at Easton. 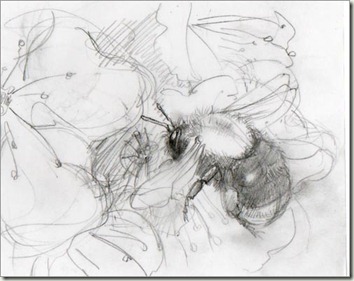 Meanwhile the Humming Cottage here is still humming, but our charming little Osmia rufa mason bees are slowing down. A few faded and balding bees are still getting into the house. I put them on the chives outside the back door. 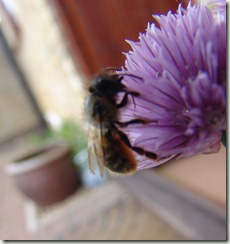 They bury their heads in the flowers and then, suitable revived, fly off.
I will miss them.

Amongst the commissions I have done recently was a little Blue Orchard bee tattoo design for Branne.
I am not going to post the design as it’s just too easy to copy and I want it to be her unique design.
But when it is finished I will ask for a skin shot!

This is not the first time I have been asked to design tattoos and bees are, quite rightly, rather popular. There was an artsy tattoo “event” in the UK late last year and I know that my friend Damian who has done so much to publicise the plight of bees at “Help Save Bees” was considering a nice discreet bumblebee.

The project was called “ExtInked”, and invited volunteers to be tattooed with one of 100 endangered plants, animals, and fungi to celebrate Darwin’s bicentennial and draw attention (no pun intended ) to the decline of species. It was a rather cool project! .. You can read all about it here at Ultimate Holding Company (UHC) .

There were a number of bee designs including the shill carder bee.  No images of the bees are available, but here is a rather nice big spider, not perhaps the choice for someone with an arachnophobic  partner. 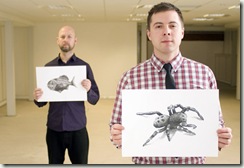 Bees are somewhat more appealing, to me anyway and so I am very pleased to be able to share with you the great tattoo that Christine had done, based on a couple of my mason bee paintings. It’s rather nice as she has incorporated both the Blue Orchard Bee  and the Red Orchard  Bee, Osmia lignaria and Osmia rufa Here are BOB and ROB happily buzzing around Christine’s shoulder! 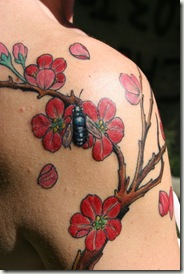 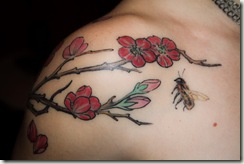 Of course what we all really want to ask is, “ How much did it hurt, Christine?? “

There are lots of honey and bumblebee tattoos but it’s so nice that both Christine and Brieanne are giving the Orchard Bees a look in. Am I getting one (or two or three)?…well, maybe.  They will go well with the leathers and the very big motor bike I am thinking of getting.. 🙂