It has now rained almost constantly for two days now,  not much in the way of beautiful clouds or apocalyptic storms but just gloomy grey skies.
Have they been sent as a reminder of what the UK has in store for us?

It’s time to seriously sort out, throw out, sell up and pack. I am now being ruthless.  It’s less than 3 weeks to go to our moving day.

However to lift my spirits a bit I have started thinking about my next commission which involves, to my delight, the wonderful gingko tree. I went to Leu Gardens a few days ago to collect a sprig of leaves.
They have quite a few ginkgo trees which I wrote about long ago,  back in September 2008. when I drew three little leaves for  “Leaf of the Day”  see Ginkgo Leaves. 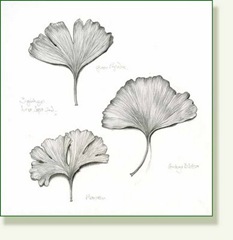 The leaves have been in the fridge and although not quite as bouncy as when I first brought them back, they are fine for sketching.

I hung the sprigs from my lamp to draw them. 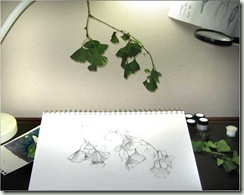 The curious leathery leaves with their deeply ridged surface grow in groups from little nodules along the branch. Their flat fan-like shape and very long petioles allow them catch the slightest puff of wind and flutter so beautifully in the breeze. (I am reminded so much of the Cottonwood trees we saw up in New Mexico.)
The raised vein structure in the leaves themselves is rather odd,  branching from just two parallel veins they repeatedly divide into two and do not join. 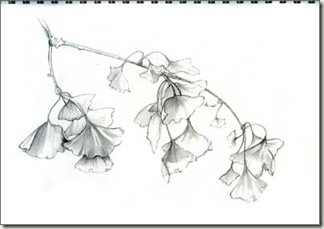 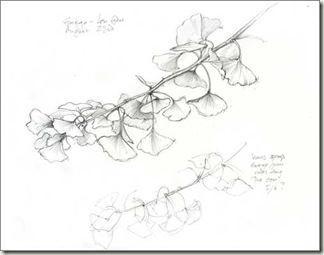 The Ancient Survivor When I first wrote about them I was fascinated to learn more of their ancient and wonderful history and I quote again this passage from the really excellent site The Ginkgo Pages, which really sums up the appeal of this tree.

“As the paleobotanist, Sir Albert Seward (1938) remarks: “It appeals to the historic soul: we see it as an emblem of changelessness, a heritage from worlds too remote for our human intelligence to grasp, a tree which has in its keeping the secrets of the immeasureable past.”

Dating back a staggering 270 million years, it rubbed shoulders with dinosaurs, in fact it predates them. It is unique, in an order entirely on its own, the Ginkgoales.

Once widespread over America Europe and Asia, it was thought to be extinct but the wonderful explorer, physician and naturalist Engelbert Kaempfer found it while visiting Buddhist monks in Nagasaki 1691.

He brought seeds back, planted them in the Botanic Garden at Utrecht where I think the ancient tree still survives and, talking about survival,  it is one of the few trees that survived Hiroshima. I am struck that  it seems glib to summarise the story of Darwin’s  “Living Fossil” in such a few words.

So stop for a moment and ponder on those bald statements, the links to a time we can barely comprehend, the extraordinary journeys of the early explorers, the survival of some things which defy the most awful destruction dreamed up by man. It makes our little individual lives, our petty concerns and preoccupations seem so trivial.

Consider the gingko and be humbled! And do go and read Cor Kwant’s Ginkgo Pages!!  More ginkgo tomorrow.

I am clearing the perishables out of the fridge before we go away and I had almost forgotten these 3 little Ginkgo leaves. There are several small new ginkgo trees at Leu but only the one large tree I have found so far. The Ginkgo tree, along with the cycads is an ancient survivor from prehistoric times, a true living fossil. 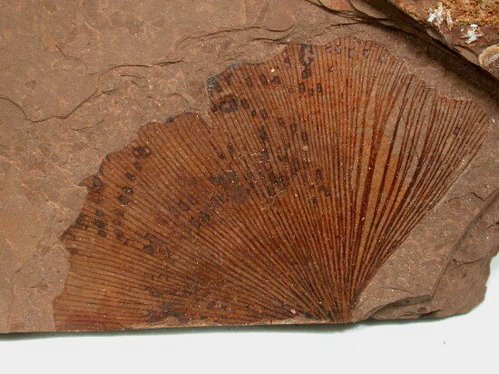 That it survived at all, seems to be thanks to the Chinese monks who planted the trees in the monastery gardens for their beauty, religious and medicinal qualities. The earliest fossil record of the existence of the tree is a staggering 270 million years old, from the Permian era, a landscape companion to my much loved cycads. 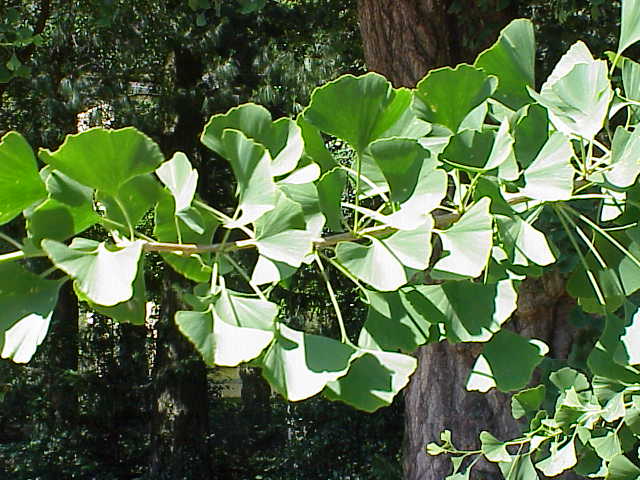 There is so much to say about these wonderful trees and eventually I will write a longer post with some more substantial drawings but I am short of time this week. So if you are interested in Ginkgoes.. who could not be!..please visit the completely wonderful site The Ginkgo Pages here.

It has been put together by Cor Kwant from the Netherlands and is a labour of love. It is terrific, with excellent facts, anecdotes, history, images and everything you could wish for about Ginkgoes. It doesn’t blink or beep or flash ads at you, (don’t you just hate those sites that do) It is just packed with relevant and interesting information. As well as botanical and historical facts there is literature, art and even recipes.
Here is a lovely quote from the index page

“As the paleobotanist, Sir Albert Seward (1938) remarks: “It appeals to the historic soul: we see it as an emblem of changelessness, a heritage from worlds too remote for our human intelligence to grasp, a tree which has in its keeping the secrets of the immeasureable past.”

If you don’t love this ancient tree already, you will after reading about it, a tree that survived Hiroshima has to be special. There were quite a few trees that did surprisingly survive and there is a site dedicated to them here called “Survivors”, its fascinating.

The leaves have a curious texture, they are quite leathery but with a silky feel and the ribbing is quite pronounced. The shapes vary considerably, even within each tree I have drawn 2 different cultivars, Green Pagoda, Mariken and the undivided leaf from the standard Ginkgo Biloba. I am looking forward to the autumn colour and some paintings.
________________________________________ 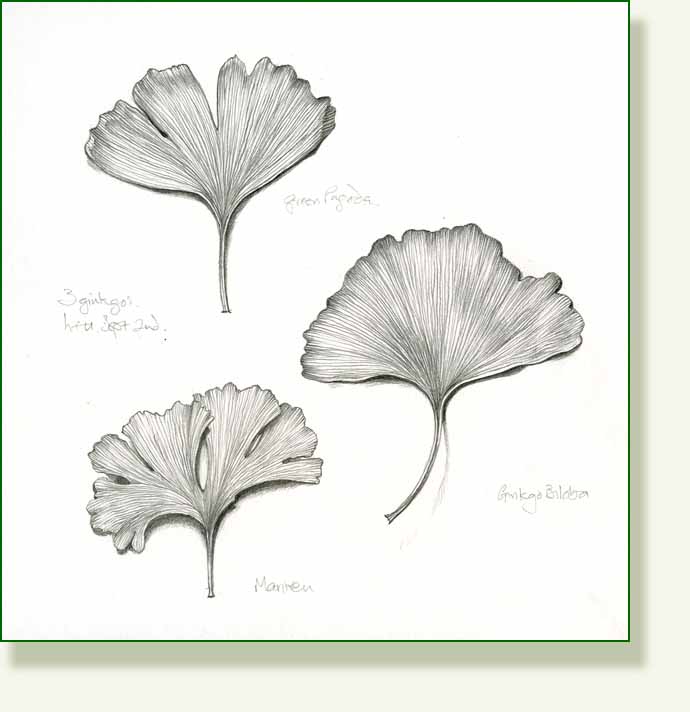