I am revisiting a few plants this week to fill in some gaps for the exhibition. Today the Yaupon Holly, another favourite tree of mine. It’s the tree of the nauseating Black Tea ritual which I wrote about here, in the post “Yaupon Holly, and a liquor that sorts the Men from the Boys”. Even if your Latin is rusty, the botanical name, Ilex vomitoria, gives the game away. The blog post will be printed for the exhibition and I felt this important Florida native needed some better representation than the one pencil drawing I had made. The trees at Leu differ slightly but I found a nice sprig of the weeping variety to paint on Saturday. These elegant trees still have some berries and are really so pretty, with tiny leathery leaves, the very longest on this sprig is only 1 inch long. There are also even tinier white flowers. I have painted two but they are difficult to spot. 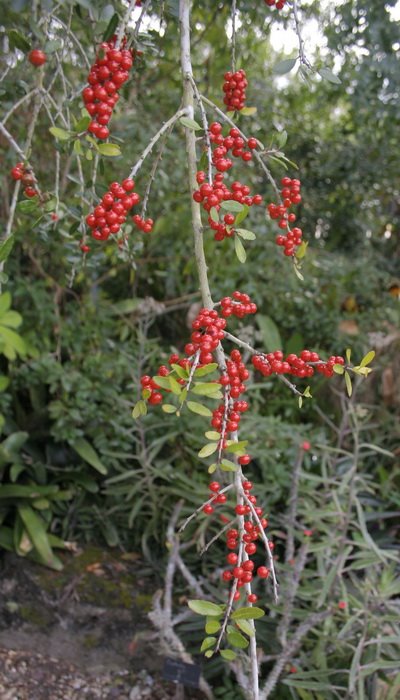 This branch is from a particularly attractive weeping tree at Leu which grows in the Arid Garden, taken back in early December. Until recent pruning, the berry laden-branches cascaded right down to the ground, arching and criss-crossing so elegantly. The Arid Garden is undergoing some reconstruction at the moment, ousting some non arid species for some more desert loving plants. It will be very interesting to see how it develops. The frogs will have had a shock as their overgrown home near around the pond has now been razed to the ground, but I am sure they will have found some other accommodating damp spot nearby.

I would definitely plant a Yaupon Holly if I had a garden. Not only are they very attractive (and can be used as a substitute for box as a hedge), but when times are hard and coffee expensive, a chew on the leaves will give you that necessary caffeine hit, so valued by the Timucua Indians. I have read that as well as being brewed for “black tea”, the plant was used as an hallucinogen to “evoke ecstasies” but also, confusingly, the bark was used to treat nightmares?
That seems contradictory to me but in the mysterious and sometimes dangerous world of ethnobotany all is possible.
_______________________________________________________