My first week of dipping my toe in the manic buzzing twittering world that is social networking has been very mixed. I have found some good information and some awful dross.
I am wondering if Twitter is really just a big community of snippet kleptomaniacs? Do they actually read what they retweet or just skim the headlines?
Since starting to research bees, a good six months go now, I have wasted hours being directed to countless sites that have very slight “information”, mostly copied from other sites, often without attribution and often completely and utterly wrong.

I don’t want to rant or be a luddite but I really wish more people would just slow down and try to process the information before “publishing” it as fact.  I am as guilty, sometimes but I do try to be accurate.

So this week I am slowing down, and am taking a step back and applauding the slow, the careful, the quiet and the considered. Hmmmm… after only a week this perhaps does not auger well for my new pushy self-promoting self does it? 🙂

The Charm of Just One Square Metre

One person who knows about taking his time is ecologist Dr  Patrick Roper who for the last six years has been studying just one square metre of land in his garden and recording some of his findings on his blog. He says, of his wonderful  project:

There is considerable fascination in the surprising variety of life in such a small area. If it were larger it would be regarded as a favoured place as several legally protected and nationally scarce species have been recorded. It also raises the question of how well we know anywhere and is a living demonstration of nature’s constant dynamic of one habitat changing to another and species coming and going, flourishing and declining.

In his recent post “Tussocking” Patrick has taken a lump of grass to see what he can find there after a hard winter.

“This excision leaves a hole of course, but this might fill up with interesting things in due time.  Or you may even find something in it – I found a mauve plastic clothes peg, a survivor from the days when a washing line passed over the area.” 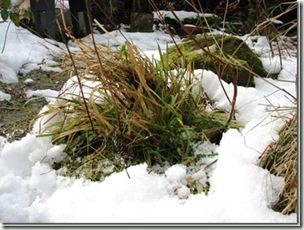 When I saw this I could not help making a comparison with Durer’s  “The Large Turf” (or as we more affectionately call it “The Great Sod” ). Reading about Patrick’s finds…

….I found myself wondering what had been creeping in and out of the daisies, yarrow, plantains, dandelions, and pimpernels that Durer so carefully and sensitively painted. In a delightful short BBC feature from “Springwatch” a couple of years ago here, you can see Dr Roper in his Square Metre.. (do have a look and see the sword swallowing grasshopper).

He imagines that he may, one day, be found as a petrified remain, transfixed and crouching by the edge of his small world. That, I guess, is what slowing down can do.  In this tiny place you can share the comings and goings over the “Great Plantain Desert”, follow an ant along “Troy Track”, ponder “The Waste”, catch up with what might be occurring down in “Volepasture” or who is hanging out on “Butterfly Rock” as was this crane fly, from A Spring Cranefly – Dicranomyia chorea  in 2007. 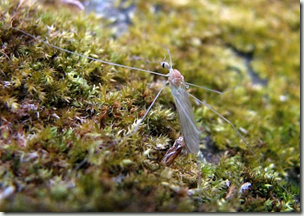 And Patrick must have the smallest pond in England.

There are many other delights to be found in his various blogs. I was very pleased to find him.. not least because my languishing PHD project parallels so much that he has to say. Thank you Patrick!

I feel it is time to shake the dust off the files and have another look. This is not a quick fix read, you have take your time and be willing to get down to ant level and consider the small things in life, to whom that one Square Metre is plant city.

Today I returned to sorting out my paints and thinking about the colour “green” for the next part of the course. Just one quick glance from the window shows so many different greens, from the olive/yellow of the palms right the way through to bluey greens of the hollies and everything else in between. At the moment many trees have new bright leaves, some brilliantly yellow-green and glowing against the blue Florida sky. It is very true that the light of a place has a huge effect on your perception of bright colours. You know how that colourful Caribbean throw you bring back from a holiday looked just lovely in its natural habitat, but now may somehow appear garish against the softer colours of a British climate. 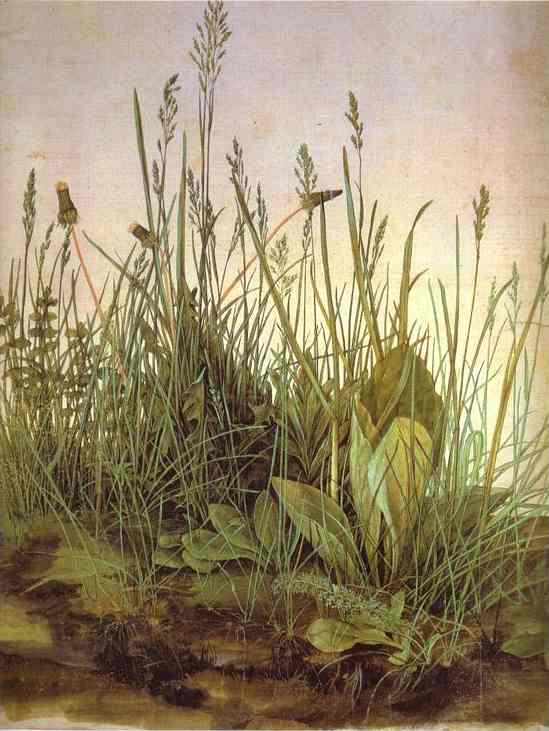 I went back to look at the the colours of one of my very favourite paintings, which to my mind is amongst the best of “botanical” paintings and one which still shapes my thinking about about the subject. Painted so long ago in 1503, Durer is considered to be one of the earliest watercolour painters. In this image it wouldn’t be Durer’s intention to paint botanic specimens for the sake of identification but to make a study of something he found interesting and beautiful. It’s a curious image in some ways. Unlike most contemporary botanical work the flowers and grasses with all their imperfections are presented intermingling in a natural way and have a relationship to each other, but then, like conventional botanical work it is set against a plain background. I am given the feeling this piece of land belongs to something else, has left a gap in a field, like a missing piece in a jigsaw.
It is a little slice of reality, without the plants being obviously arranged into a “design”, although I am sure Durer made many compositional and tonal decisions in the execution of this lovely painting.

In my original application to the course I remember writing that I particularly like work that gives a sense of place to the plants.. the artspeak word would be “context”.
Durer also gives each plant its identity (I have spoken of this before) rather than an averaged out version which smoothes out the wrinkles and takes away the character. While I can admire the execution of a beautiful individual unblemished specimen in celebration of the height of perfection of a species, for me, a more interesting piece is something that demonstrates that we do not see plants in isolation, but relating to earth, the interaction of animals and insects and the play of light. I suppose, being an illustrator I like the story!.

Thinking about colour, I also wondered about Durer´s paint. He would have had little choice of green pigments. There were very few natural green pigments and the bright strong greens, like gorgeous viridian, the much loved Pre Raphaelite green, are relatively recent. Green is a notoriously difficult colour for artists because most greens need to be mixed either by you or a paint manufacturer. However, with the continuing development of artist’s paints we do now have more choices for brilliant and lightfast colours. We need them!.. the colours of the natural world are often vibrant beyond belief!

So, green is to be my focus for the next few weeks and I am very happy about that. My own starting point was to draw some leaves from the little euonymus bush. which have an endless variety of pattern and shape. I painted them with the yellows I have and overlayed them with different blues and then ready mixed greens.. not very methodical or scientific but its a start. 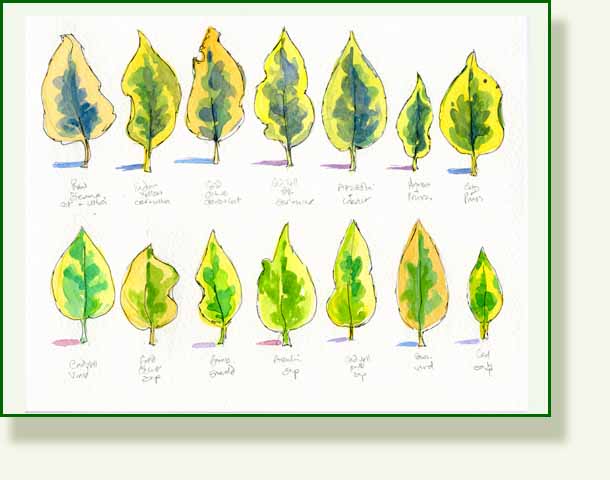 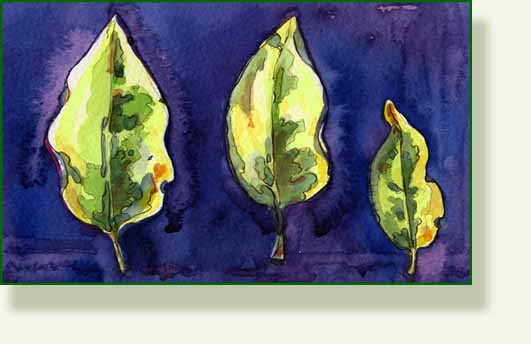