I spent far too long with the bamboos today, but that is easy to do. ..in amongst the towering stands of Giant Timber Bamboo and Weavers Bamboo there is a quiet hidden world. If you wanted to stow away at Leu (something I have often considered) that would be the place to go. You would be quickly lulled to sleep by those quiet hollow tappings and the gentle rustlings and sighing, (one of my favourite beautifully descriptive words “sussuration” A faint, indistinct, or background sound resembling whispering applies here). It is no wonder that bamboo forests were the chosen refuge of Chinese hermits or that these beautiful plants have been the inspiration for so much poetry or art.

Alone I sit in the shade of the bamboo trees,
My strings I pluck, then long and loud I sing.
Deep in the forest, none knows I exist,
None but the moon, to me she comes, shining.

Lee Kan from the Yuan Dynasty (1271 – 1368) was considered one the finest painters of bamboo. The painting of bamboo was a great art and required a lifetime’s study and practise and, as I have said before about many other art forms, it was a process of constant observation and refinement of technique until the simple beauty of line, shape and form were achieved. Their aim, to express the very essence of the plant, bird or rock they are depicting rather than botanical accuracy. 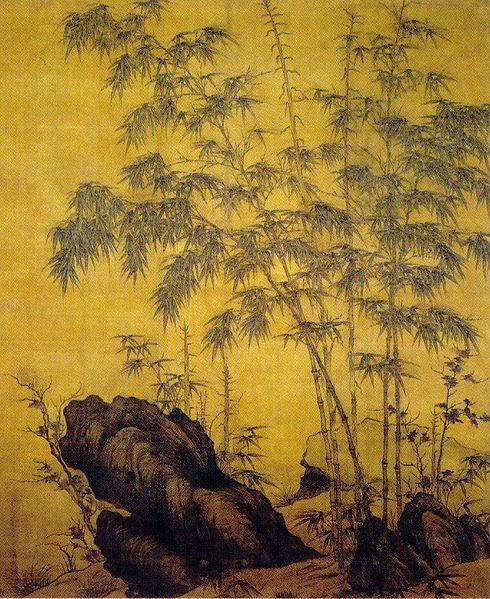 Bamboo was very special to the Chinese and became associated with the best moral characteristics, uprightness, modesty, openness and steadfastness.
Su Dongpo of the Song Dynasty (960-1279) wrote :

“I can eat without meat, but I can’t live without bamboo. No meat makes people slim, no bamboo makes people meretricious. Slim people can put on weight again, but meretriciousness cannot be rooted out.”

I particularly liked this translation just for the use of the word “meretricious” which is a wonderfully descriptive word, as one definition puts it:
Resembling the arts of a harlot; alluring by false show; gaudily and deceitfully ornamental; tawdry; as, meretricious dress or ornaments.
A perfect word for the poem, being the complete antithesis of everything bamboo.

I did get a couple of sketches done and then my small practice piece,(for tight botanical paintings, the very antithesis of beautiful Chinese brushwork…sigh.. ) is part of a small philodendron of some kind. This is a particularly delicate split leafed variety which twines affectionately round various trees at the Gardens.
“philódendros” ..from the Greek, meaning “fond of trees”.. as I am. 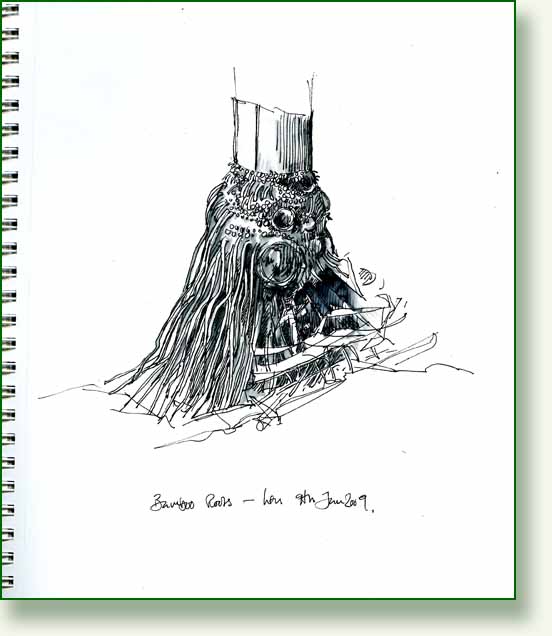 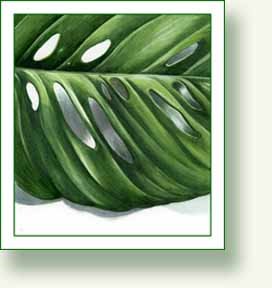 Today I opened two doors, which led me to worlds I could have stayed in for a very long time. One led to the world of Darwin and the other to the world of Bamboo. I have been transfixed all morning listening to the BBC’s programmes about Darwin on the radio and was then overwhelmed by the amount of information about Bamboo I saw on the Internet.

Of the many many things I have yet to explore at the Gardens, Bamboo is just one. Amongst the others are the palms, the pines, the cacti, the roses and camellias, not to mention the lilies the vines, the mulberry trees and on and on .. and generally anything with leaves too big to fit in my back pack, or dangle from the bike handlebars. The Elephant’s Ears are all bigger than I am, so precariously wobbling along with one one of these through the urban wastelands of Winter Park would be bound to excite the interest of the local sheriff, or at best incite ridicule, both of which I generally try to avoid. And then what would I do with it? It would take up 90% of my work room and I would have to flatten myself against the wall to be able to see any of it in perspective and I imagine it would quickly become the “elephant in the room” as I tried to ignore the problem of drawing it. So for these big subjects I either have to draw in situ or use photos. I will probably do a bit of both.

Yesterday and today I decided I needed some practise in painting texture in detail. (The next unit for the course is vegetables and texture must come into it). Two contrasting textures that I had to hand were the Snakewood leaf and these wonderful Bamboo sheaths. I have had them for some time. I know nothing about bamboo except that it has many and various uses, it is exceptionally beautiful and there are hundreds of different varieties. We used to have an unruly clump in the garden when I was young but nothing that ever grew to the towering heights of the ones here. I also did not know that bamboo stems were called “culms”. What I have sketched are the sheaths that protect the shoots and stems which are shrugged off as the stems grow. 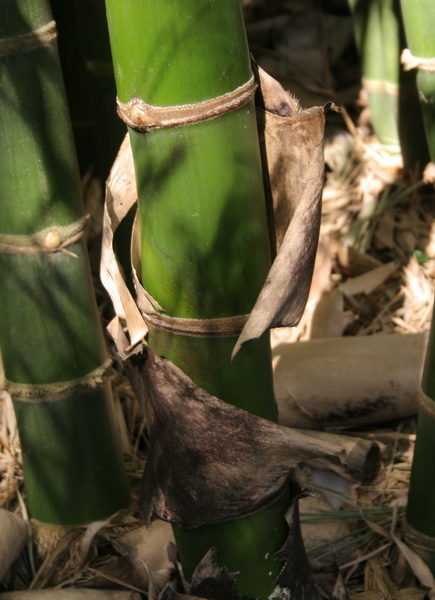 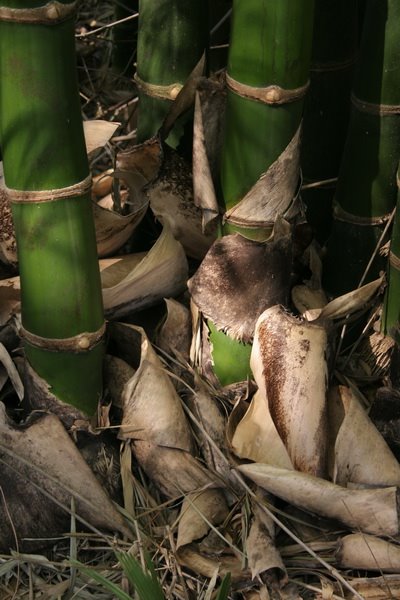 I was captivated by these strange and beautiful things that littered the ground around the bamboos and brought 5 home, that was in September. They have some nasty prickly hairs on the outside which can be a skin irritant but the shapes are wonderful, simple and sculptural. I just put these 5 on the floor and sketched them as they were. The painted detail is from the edge of one. I have taken a few casual photographs of the bamboos at Leu but tomorrow I am going back to take a closer look.

I chose to do small sections just for the practice, but I have to admit I was reluctant to start them because this is slow, slow work. These are very small, only 3.5 inches by 4, too small and fiddly for my natural way of working. I am thinking they would be better and less time consuming 5 times the size or more. But this is supposed to be practice for botanical painting..so I just have to resign myself to the number 2 sables and knuckle down. The Snakewood leaf was particularly slow but I liked this section, it reminded me so much of the classic Corinthian capitals which were based on the acanthus leaves. There are a couple of acanthus plants in flower at Leu whose leaves I have been considering drawing but tomorrow my job is to find some more textures to try to paint. I am daunted by the 9,988 hours I still have left to become proficient.

Bamboo Sheaths and Some Texture Practice 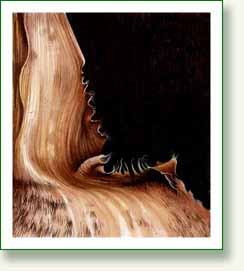