I am so delighted to report my first bee sightings of this year.

Not in the empty garden of the Ugly Bungalow where as yet there are only 3 crocuses in bloom but in nearby Brampton Wood where, this morning, in glorious sunshine, a huge and very loud Buff tailed Bumble Bee queen zoomed past my ear.

She came so close I had to duck. She flew off into the wood and I wondered what she will find to forage on? Then further along, glowing such a brilliant yellow against the browns and greys of the leafless wood, a gorgeous brimstone butterfly flew past. It seemed quite magical to see this little piece of fluttering summer colour in the dark wood. It lifted my spirits even more.
I was in the wood to find some bits and pieces for my first drawing workshop on Saturday morning but also just to get out and enjoy the sun. It has seemed a long and dreary month.
I am still unable to work but finding beautiful lichen-covered twigs, little acorn cups, old seed pods and new catkins cheered me up immensely.
The birds were singing their little hearts out and pushing up through the mossy banks were tiny flat rosettes of primroses and everywhere, unfurling their elegant leaves were wild arums, some spotted and some plain. 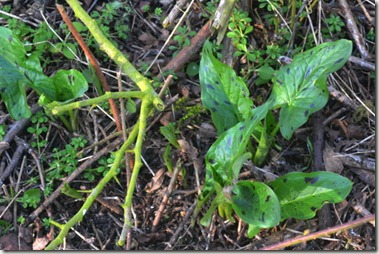 These curious plants, always viewed with some suspicion due to their phallic shape, their insect trapping mechanisms and poisonous berries, have many wonderfully descriptive names, Cuckoo Pint, Lords and Ladies, Adam and Eve, Jack in the Pulpit, Wake Robin, Snake Meat, Deadman’s Fingers and more.

Some appear quite innocent until you look further into their derivation .. ie “pint” is from the Anglo Saxon, “pintle” meaning penis.
I don’t think my mother ever enlightened me of this true meaning.

There is a website http://www.wildarum.co.uk/ compiled by Lynden Swift where you will find a list of regional names and more fascinating info. 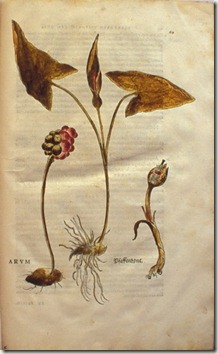 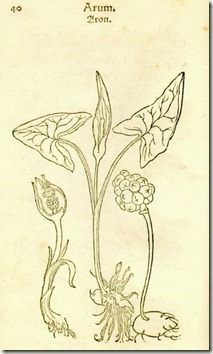 Two woodcuts of this snaky little plant (interestingly almost reversed, by copying?) from Leonhard Fuchs herbals, the coloured one from 1542 from the Smithsonian collection of Renaissance Herbals here and the other from 1545 from Yale Library here.

Fuchs was an advocate of the use of naturalistic images based on real observation which together with text gave double proof of identity. In the past when plants were mainly for medicinal purposes, the constant copying and re-copying of over simplified images led to some disastrous mistaken identities.

I thought I just might find some more bees in the local garden centre which has many more flowers than I do.. but all I could find were just two honey bees. Both had full pollen baskets one bright yellow and the other almost white.

I would guess the first had been visiting the crocuses and the other, where I found them both, foraging from the Christmas roses.

In 1538‘ in The Names of Herbes’, William Turner writes of the Arum that it “groweth in euery hedge almost in Englande aboute townes in the sprynge of the yere.” It think sprynge might well be sprynging 🙂