These pods with their innocent looking, pretty red and black seeds have been sitting on my desk for a couple of weeks now.
I had noticed the brilliant red dots shining out from the tangled remains of a decaying creeper which was twining over the chain link fence of the dog park opposite our apartment block.
I had no idea what it was and was astonished to find that, insinuating itself amongst the benign ivies and maypops, is one of the most deadly plants in the world! 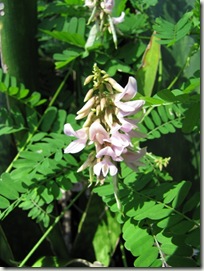 But its most fascinating “attribute” is that the hard red and black seeds, which are still used for jewelry in central America and Mexico, contain a poison which is really deadly.

So much so, that just one thoroughly chewed seed can cause fatal poisoning. The poison is “Abrin”, a relative of “Ricin” which was used in London in 1978, to dispatch Georgi Markov, in the famous umbrella killing.
Jewelry making accidents sometimes do happen when the makers prick a finger while handling the seeds, but apparently if swallowed whole the seeds are harmless..
Hmmm…
The ever useful, excellent and entertaining site Waynesword has this to say and gives more info about its deadly qualities.

“In spite of their reputation as one of the world’s most deadly seeds, precatory beans are certainly one of the most beautiful seeds on earth. They are sometimes called prayer beans or rosary beans and have been used for rosaries. Because of their remarkably uniform weight of 1/10th of a gram, seeds of Abrus precatorius were used by goldsmiths of East Asia as standard weights for weighing gold and silver. In fact, the famous Koh-i-noor diamond of India, now one of the British crown jewels, was reportedly weighed using seeds of Abrus precatorius.”

It’s another unwelcome invasive species here in Florida given category 1 status. A thorough explanation of the plant and its toxicity can be found here.

I am left wondering what being so toxic does for the plant? Of course it will repel some animals grazers, but interestingly it appears that birds are not affected by abrin and they are largely responsible for dispersing the seeds.

It is also another of those strange plants that quite likes being burnt. Seeds are readily available from seed suppliers, some of whom do not mention its deadly properties, but then as a funny article about the possibility of terrorist uses of Abrus says,

“Somehow mankind has muddled through, managing not to exterminate itself with rosary peas” ………read more from the Register here

Whatever its problems it is lovely to draw, the shiny seeds contrasting with the dark twisted pods which have a thin papery lining. I think I may do a couple more studies and find out a bit more about this interesting plant which also has some medicinal uses… apart from the fatal ones of course!

The “Lucky” (for some but not others) Bean. 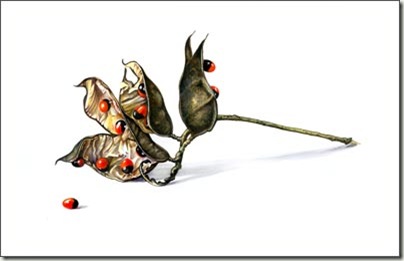