This is my delayed post from last week. It’s just a post about printmaking and book making which creative people all over the world like to engage in and share with each other. To be honest it seems a bit trivial right now and I am struggling. But I have to try to keep doing something vaguely normal while continuing to help and support the Ukrainian people as much as I can, along with trying to hold our appalling corrupt government to account as much as I possibly can. I wonder how long it will be before the Ukrainians can enjoy a little comfortable ‘normal’ again?

I took a bit of side step from the history of printing to make a couple of simple bound booklets made in the style of some of the early printed Chinese books. Minimal cutting this week, thank goodness, as I used some early woodblocks I’d made a few years ago for one of my many tree inspired experiments. 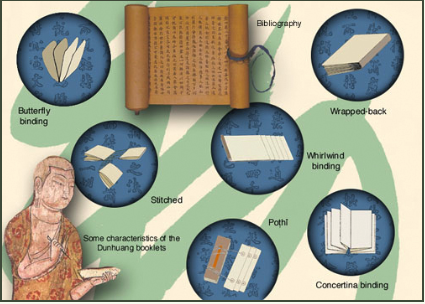 This graphic from the Dunhuang project shows the variety of bindings that were found on the site.

In China the earliest printed books were originally in scroll form, printed from separate blocks and the sections glued together. This was quite tricky to read, especially to find a particular passage and the constant rolling and unrolling damaged the paper (normally hemp paper at this time).
The scroll then developed into a concertina form, easier to handle, to read and locate those important passages. It’s interesting to think how very popular this ancient form has become with book artists today without the majority of them knowing anything about its origin.

It seems from the article accompanying the Dunhuang graphic that quite a few styles were mixed and matched, book binders finding their own ways to enclose the texts according to need, value and portability. There is a very thorough explanation of the various bookbinding techniques found at the Dunhuang caves from the British Library here

Of the bindings I chose to look at just two, the butterfly binding and the wrapped back binding.

Woodblock printing and the limitations on paper size made the butterfly binding a natural development from the scroll. Two blocks could be printed on one face of a single sheet and this was then folded inwards so the folds were towards the spine. Here is a rather poetic description.

“The classic butterfly binding of the Northern Song was suited to the blockprinting
technique, each leaf of paper printed on one side only. The printed sheets were folded,
ordered and pasted one to another along the fold, forming the spine.
The centre of the block, [ban xin, literally the ‘heart of the block’] was at the centre of
the book, forming the inner side of the spine, like a butterfly’s body between the wings.
When the book was closed, it was like a butterfly folding its wings as it alights on a
flower, hence the name of the format.”

The issue with the Butterfly binding was the obvious two blank pages in between the printed sides. This was solved by folding the sheets on the foredge and fixing the cut ends at the spine with paper “hinges”. The cover was made of a spine strip and separate glued paper covers. This is the very familiar form of traditional side bound Japanese books but without the sewing.

The problems with glue loving insects

One main snag with the glued forms was how attractive the glue was to insects. I assume that the glue was the traditional rice paste which would would have been very nutritious to the bugs. Also the butterfly form was quite fragile along the glued spine. So eventually the spines were reinforced  with silk thread,  very like the Japanese stab bound books we see today. Originally there were 4 holes, made just outside the interior paper bindings.
This way of binding is now very popular with many different decorative spine patterns much loved by craft book artists.

There is a good article about early Chinese bindings from the V&A here /http://www.vam.ac.uk/content/journals/conservation-journal/issue-38/introduction-to-chinese-traditional-book-making/

I used the old blocks and some medium weight Chinese paper .. about 50gsm for the pages, digitally printed the texts and then hand printed the woodblocks. 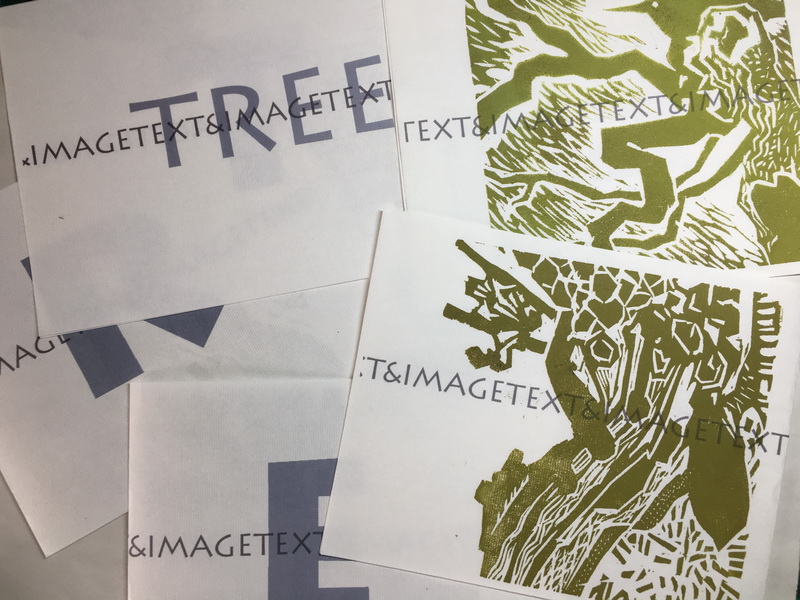 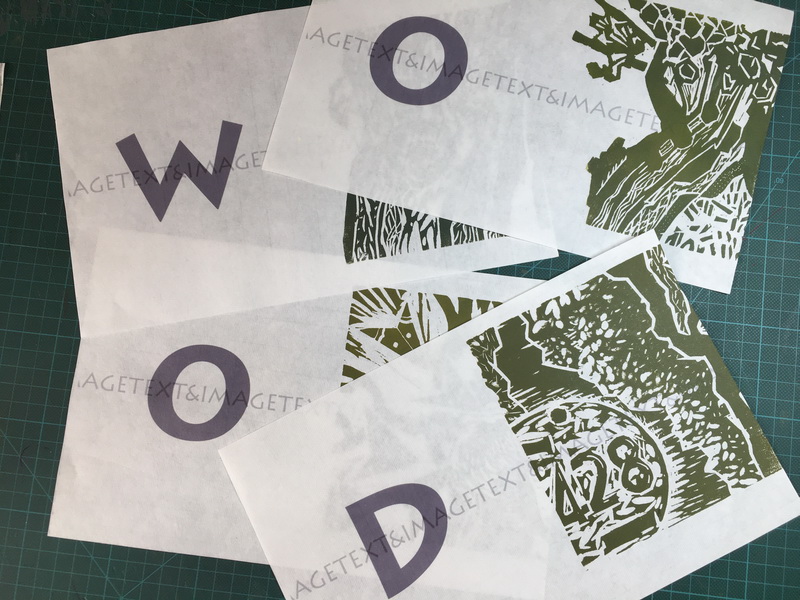 This has the inward folded sheets glued at the spine with the two blank sheets in between the printed face. 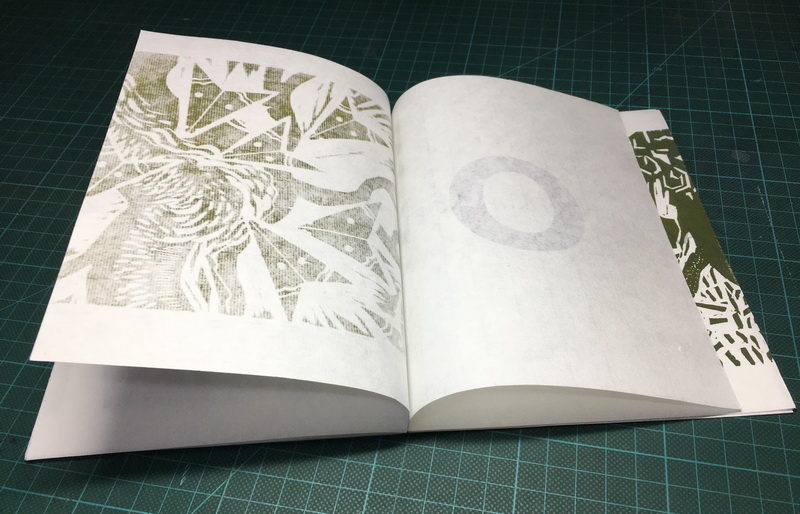 The butterfly wing shape where the spine is glued

The cover is just two sheets of paper again glued at the spine. It could have been a wrap around but I wanted to leave the spine showing the individual folds

Tree: The Wrapped Back Binding

In this binding the sheets were folded the other way with the fold on the foredge and the cut ends at the spine. There is traditionally an inner binding which was made with paper string either tied or with the ends flattened and stiffened with glue. I have tried both here. The paper string is easy to make with Japanese paper and very strong. This holds the text block in place while a stronger or more decorative binding is made.
Additionally the corners are covered with protective paper corners. 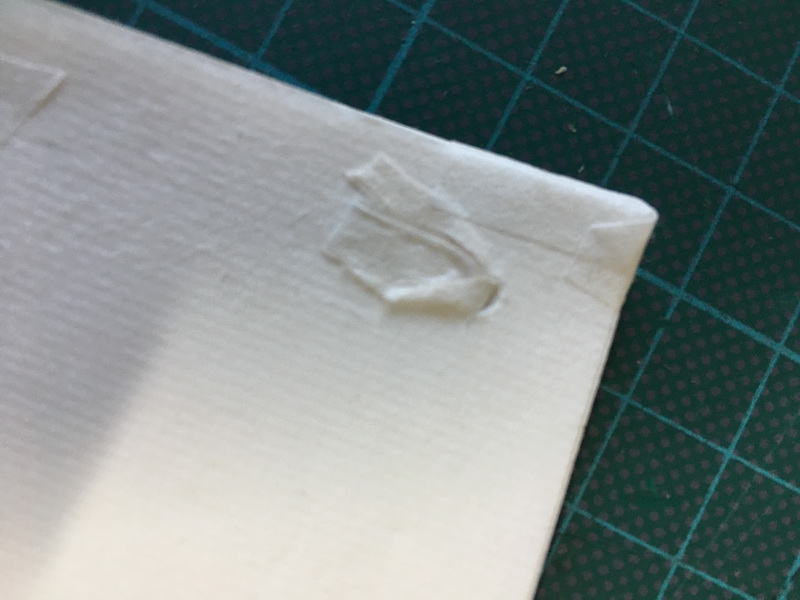 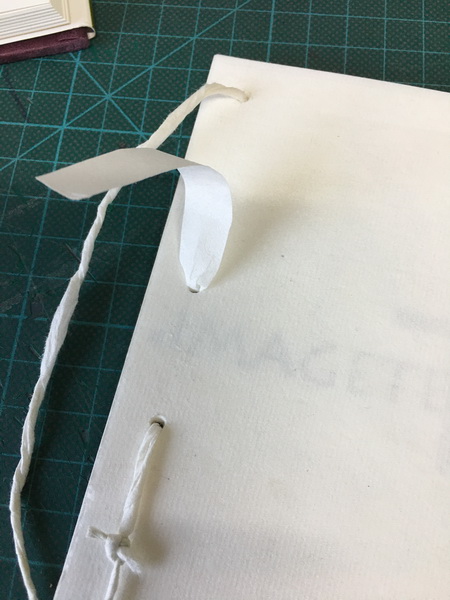 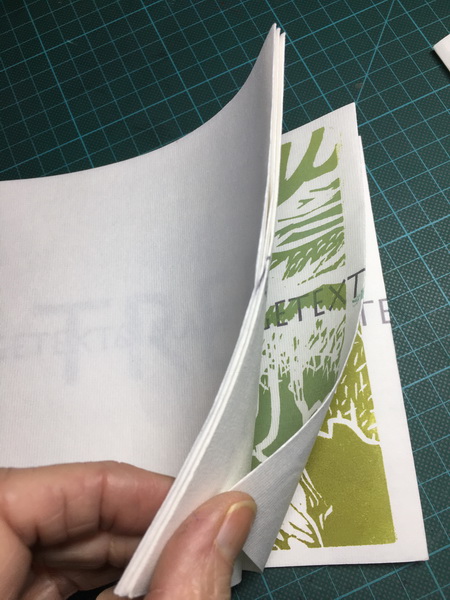 I ran the text across the foredges to show the folded edge more clearly.

The cover is made with a spine strip and then two cover papers, cut slightly larger, folded over to fit the text block and glued to the spine and the first/last pages. This gives a rather nice pillowy feel to the book.

In the early books several sheets of old papers were laminated together to form covers with a decorative paper on the top.
Reading more it seems that covers were varied. Sometimes wrap around and sometimes cut flush. Sometimes a simple blue dyed paper or sometimes yellow silk. That I must try ! 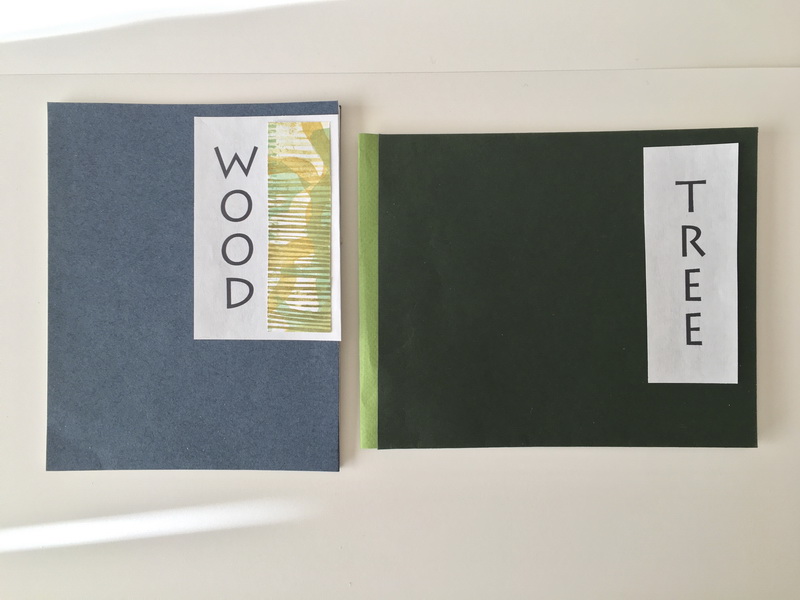 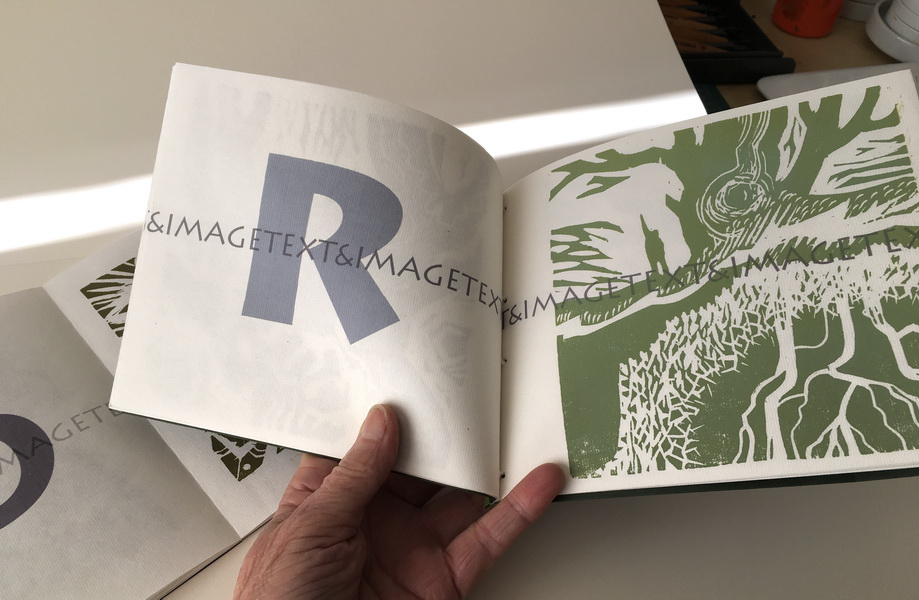 Opening issues.
I have to say I am not keen on the side bound, “stab stitched” books because they don’t open flat. You can help this by making a larger spine with a fold, like an old fashioned photo album,  but even then it’s a pain. The butterfly book on the other hand opens beautifully. Nowadays this form, (sometimes called drumleaf binding), is used for binding single folded sheets, gluing the blank pages together at both spine and foredge. 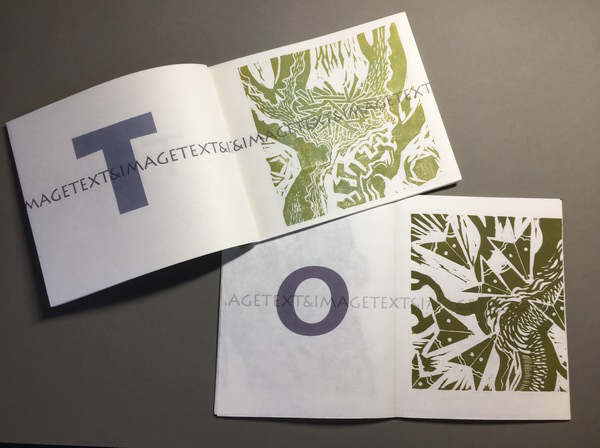 Top: the side bound “Tree” book and below the very flat opening butterfly “Wood” book.

While researching the books I came across the term “fishtail” which refers to the printed strip in between the two printed faces of a page. If you look at traditionally printed and bound Chinese and Japanese books where the sheets are folded on the foredge there is often some text/design on that fold. This design is called a fishtail and is a guide to folding the sheet as well as containing some other info, like page numbers etc. 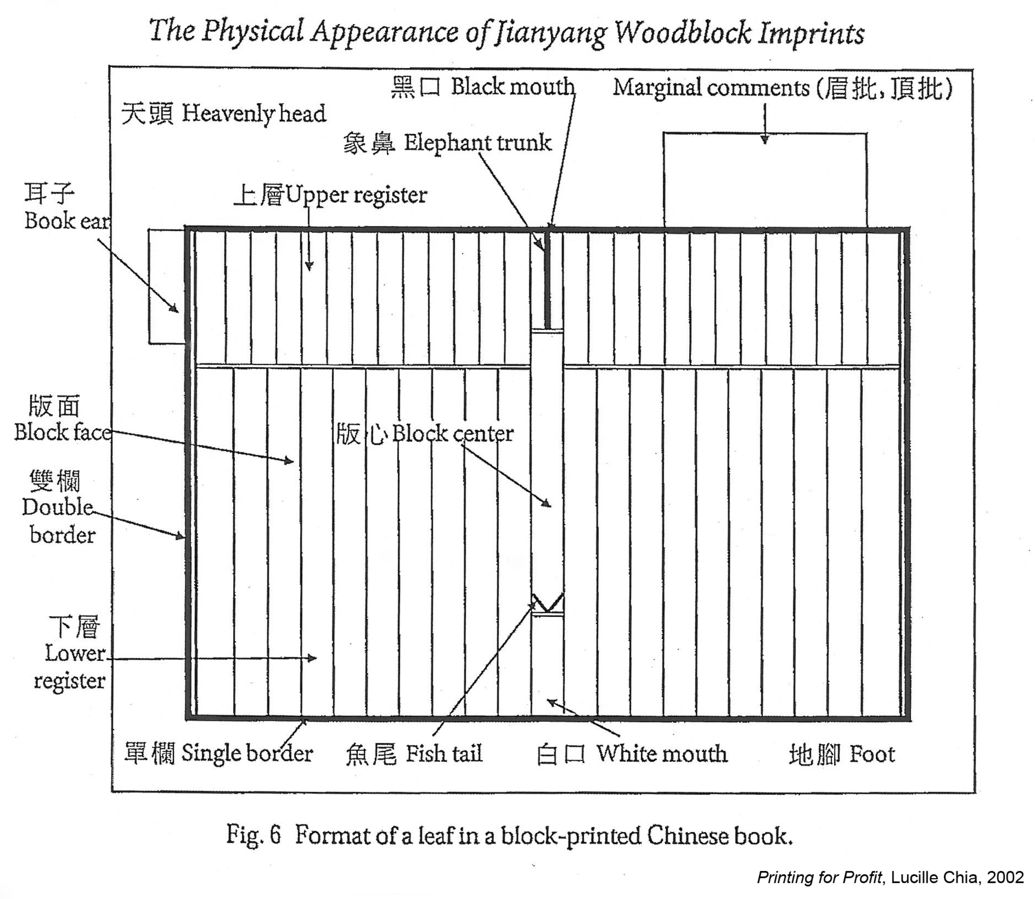 The patterns used are fascinating and as a quick exercise I cut a block into some of the traditional patterns and then printed a few variations. Hmm nice. I will definitely be back to these. 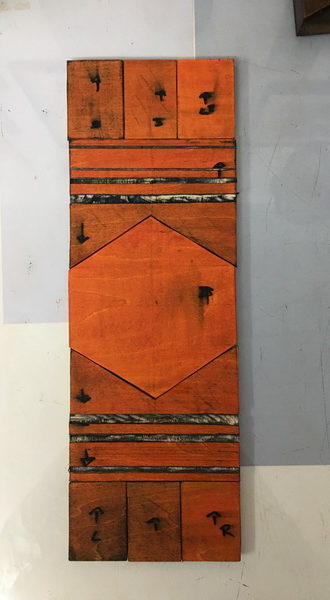 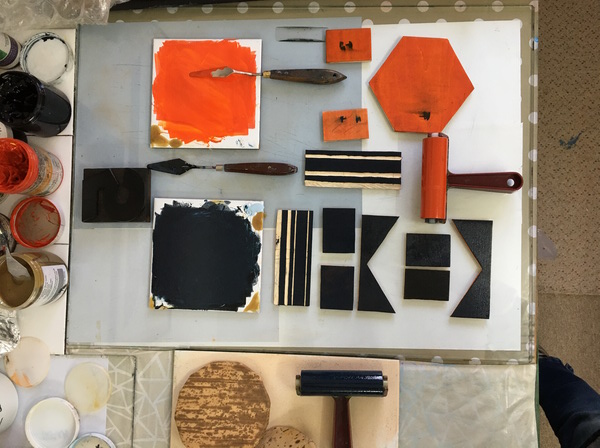 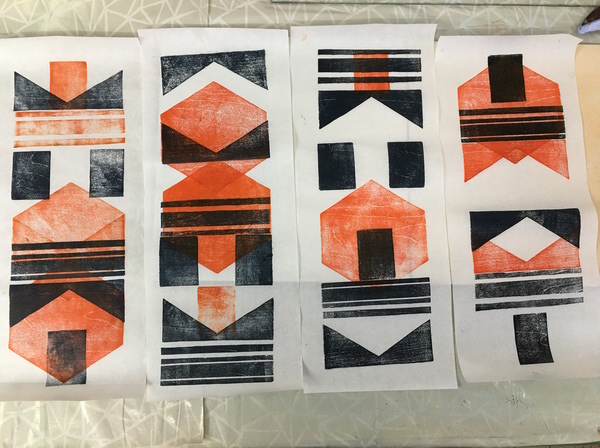 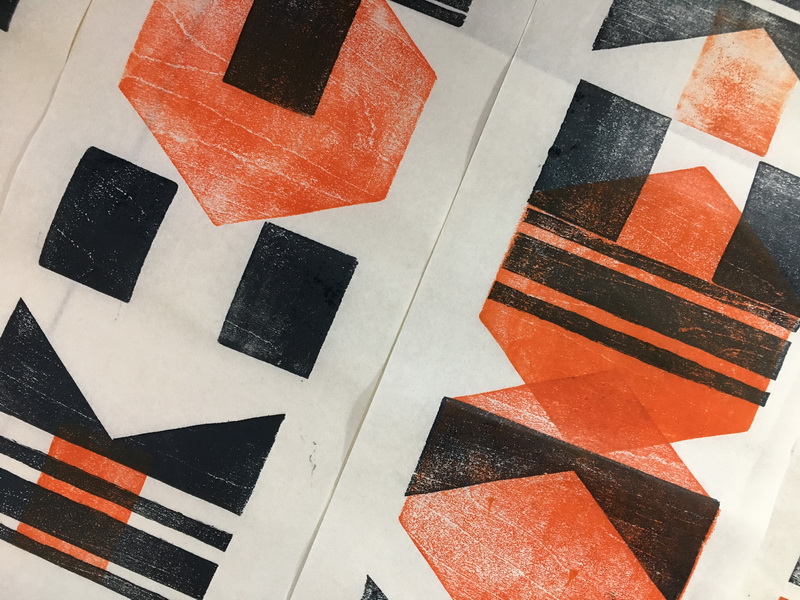 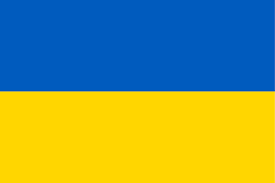 Russia’s war against Ukraine. What can you do to support Ukraine & Ukrainians?