Do Bees Have Characters?

It is something I often wonder when I am painting them. I am not particularly fanciful or overly sentimental but I do like to express something of what I think might be a bee’s character.
“Characteristic” is probably a more acceptable term for the naturalist or scientist. There certainly do seem to be differences between species and within species.. we describe different honey bee strains as “docile” or “aggressive”.
But that’s not really character.

Do bees get depressed or elated, is one Queen more attentive to her brood than another,  one worker a harder worker than another?
I don’t know. I had been reading Sladen’s wonderful “The Humble Bee” again to remind myself of his observations, which were both affectionate and important.
I think he would have voted for character. He raised broods of bees in his garden and study so that he could watch and record them. Here he has found a searching lapidarius queen to take over small orphaned colony.

“I first introduced the queen to the brood. While she was yet an inch away from it she suddenly abandoned her ordinary dull and careless manner and , standing at attention , stretched out her antennae…. Then she advanced cautiously, and when half a minute later she reached the brood she showed great satisfaction and immediately stretched herself over it.”

On another occasion he has taken a queen out of her nest to eradicate some pesky ants. When he puts her back he notes.

“She was very pleased to get back to her brood. When I came to fill the honey pot I found the lump of comb had rolled almost off the sacking, so I hollowed the latter in the middle to retain it. The queen seemed to consider the brood to be insufficiently covered and ran about pulling and detaching bits of nest material with her jaws and carding them with her legs. She even tried to bite little pieces off the edges of the sacking. While thus occupied she frequently returned to the brood and always when she reached it emitted little buzzes of pleasure.” from FW Sladen’s The Humble Bee 1912.

Sketches I have been doing some more sketching to get me back into the shape of bumble bees. They pose problems because I like to try to show some part of the eye. Again it’s a human response ..we seek out eyes to engage with, even if they are not “eyes” in our sense. But their hunched shape means that in quite a few views the head is hidden. 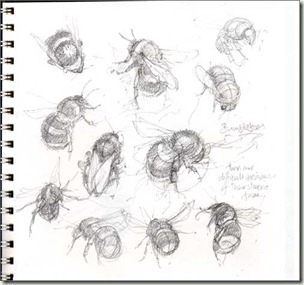 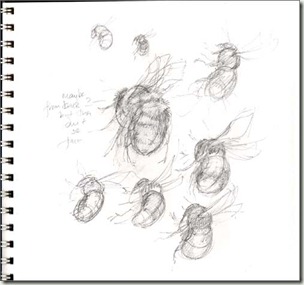 For the B terrestris and honeysuckle I was wondering if I should tilt the view to look up, more of a worm eye view.
But with this bee it’s important to show the long head, the tongue and the characteristic two yellow stripes on the thorax 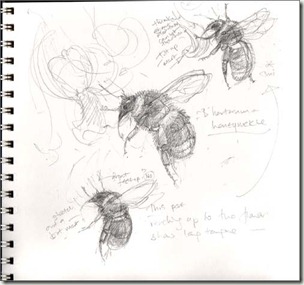 Eventually I decide on a side view.

So this Bombus hortorum will be “reaching up” with its front legs, approaching a honeysuckle flower.
To be less anthropomorphic perhaps I should just say “raising its front legs” because “reaching up” can signify a very human, emotionally charged, action.
It can be a request for help or for an embrace, an attempt to grasp something just out of reach, or to hold onto something to prevent a fall, or an appeal to be lifted up.

I have watched bees, especially bumble bees, reaching up to grasp the edges of petals.
Sometimes you feel you want to give them a helping hand and very often if you gently offer a finger for them to rest their back legs on they will willingly accept.
This is very non-scientific language I know, but it’s very endearing behaviour. 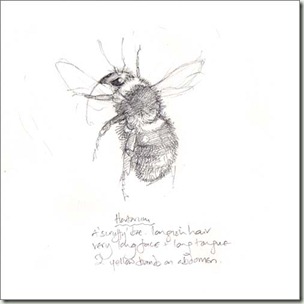 …and as my aim is to win the affection of kind hearted people and recruit them to the bee cause then my Bombus hortorum, here, will definitely be “reaching up”.