Bombus pratorum ( L Pratum meadowland). Although known as the “ Early Nesting Bumble Bee” this pretty little Bumble Bee is not the earliest to be seen in the UK but usually one of the first.
Also confusingly, there are considerable colour variations but a rough guide is that queens, workers and males all have orangey red tails, and the male has more yellow hair on the thorax and of course the wonderful yellow moustache.

They are small, short tongued bees who cannot easily access the nectar from vetches, preferring the shallower flowers of the daisy family, dandelions and in the spring, willow flowers. They are described as having a characteristically rounded dumpy shape.

Queens and Nests Normally active from March the big handsome Queen bees will be seen cruising for suitable nesting spots. She will not be too fussy about where she makes her nest and like many other bumble bees will take advantage of abandoned mouse nests, tangles of dead grass, empty bird boxes or old nests.
I have seen big bumble bees meandering around in the spring in that seemingly aimless way, I realise now they they were just queens looking for good nest sites. Again, from the excellent Bumblebee.org (from whom I have learnt so much!)

“It is at this time that you most commonly find bumblebees straying into your house and behaving strangely. They will investigate any dark corner, flying slowly and sometimes even disappearing down holes, or even into pockets. They seem oblivious to their surroundings, and not at all interested in flowers.” 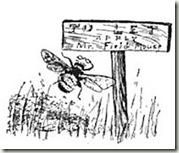 I found this charming little illustration from a version of the equally charming Anna Botsford Comstock’s “Handbook of Nature”. She writes;

Bumble bee nests are not as regimented and conformist as those of the honey bee. They look like a jumble of bubbles, rather like the inside of a giant Aero, but are still beautifully and ingeniously crafted. Karl von Frisch in “Animal Architecture” describes two of his collection of nests;

I have in my possession a wagtails’s nest from a sheltered spot under the eaves of a boathouse. In its soft padded hollow I found not eggs but the nest of a bumble bee. An even more cozy abode was chosen by a colony of early bumble bees ( bombus pratorum) that made their nest in a basket of chicken feathers. when I opened it I found the feathers immediately surrounding the hollow place that contained the the comb, were stuck together to form a thick crust, which made an excellent insulating layer between the nest cavity proper and the fluffy mass of the feathers.. … I assumed that the material was wax or resin collected from trees…but wondered how the bees had managed to work such hard substances into the loose mass of feathers”

But thirty years later when Frisch had a chemical analysis made he was surprised to find this crust was made of sugar!

“The bumble bees had obviously used either nectar or thickened honey from their storage jars to moisten the feather so that the whole dried to a dense solid crust “ Clever clever bees!

There are many illustrations of bumble bee nests but this is a particular favourite of mine. The nest of Bombus pratorum from the beautifully illustrated 1923 Die Europäischen Bienen by H Friese from excellent German wild bee site here 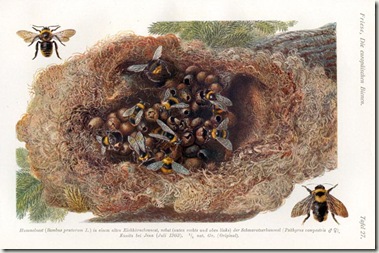 I have also been reading Frederick W L Sladen’s ‘The Humble Bee’ It’s Life History and How To Domesticate It.

People who read my blog will know how much I love the lyrical writing of naturalists from earlier days, just for the affection and gentleness which I find lacking in much modern writing. This beautiful piece about the quiet end of the Bombus pratorum queen had me in tears !

The End of the Old Queen “In the case of B. pratorum, and probably of other species whose colonies end their existence in the height of summer, the aged queen often spends the evening of her life very pleasantly with her little band of worn-out workers. They sit together on two or three cells on the top of the ruined edifice, and make no attempt to rear any more brood. The exhausting work of bearing done, the queen’s body shrinks to its original size, and she becomes quite active and youthful-looking again. This well-earned rest lasts for about a week, and death, when at last it comes, brings with it no discomfort. One night, a little cooler than usual, finding her food supply exhausted, the queen grows torpid, as she has done many a time in the early part of her career; but on this occasion, her life-work finished, there is no awakening.

Thank you Gloria from Pollinators Welcome and Square Metre for posting this.

My Queen Bee however is alive and well .. I have not quite finished the background yet but again I have run out of time today. I am painting her contemplating a suitable nest site, her busy life all ahead of her.. 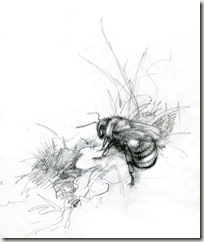 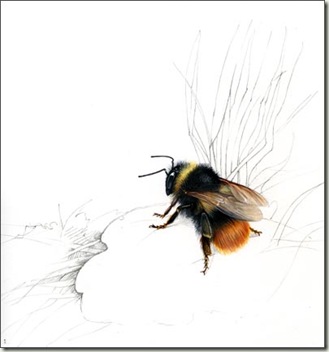 Watercolour and pencil .. not quite finished.. I blame it on Twitter!