I had recently written of Mark Catesby and his magnificent twenty year production of the Natural History of Carolina in 1749 here and had thought how very few publications now would be able to sustain interest, or stamina, on behalf of either the public or the artist for something of that length. But a more recent and equally wonderful accomplishment was that of Stella Ross Craig, who must be one of my favourite black and white botanical illustrators.
I came across her work many years ago but only in the form of some old second hand paperbacks. Then, in a college library, I found the whole staggering collection of her Drawings of British Plants. The work, which is a systematic record of British Flora comprising over 1300 black and white plates, was started in 1942 and not completed until 1973. What made this different from Catesby’s work was that, rather than being aimed at wealthy patrons these drawings were issued as modest paperbacks priced initially at 6 shillings. In 1999 Stella Ross Craig became only the sixth person to receive the Kew Award medal and four years later was given her first ever exhibition at the Kew Gallery…at the age of 95.
She died in 2006 and the following is from the very nice obituary and appreciation in the Telegraph here

As she drew in black and white, colour was not an issue, so Stella Ross-Craig was able to draw from dried specimens in the Kew herbarium.
It was nonetheless a considerable feat of art and imagination to turn something dead, brown and flat into a vibrant image of a living plant. “They all come alive to me,” was her explanation. Perhaps the answer lay in the fact that she was a rarity among botanical illustrators in having been trained as an artist as well as a botanist. She completed the drawings at a rate of two a week, a remarkable feat considering their astonishing detail.
First she would read everything available about the plant and then, either from a live example or a dried specimen, she would work out the presentation and the magnified diagnostic details.
This would be followed by a detailed drawing in light pencil on white board, using a dissecting microscope and compass for the enlargements – vital for identification – and completed in ink with a lithographic pen. Finally, neat snippets of printed card would be glued in to provide the reference key to the likes of suffocated clover, spotted medick and hottentot fig. The medlar was her favourite of her drawings. “

This is her drawing of the Medlar. 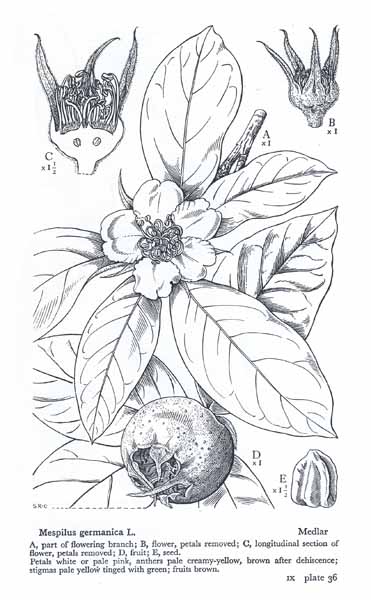 These are some of my particular favourites:
The ubiquitous Dead Nettle 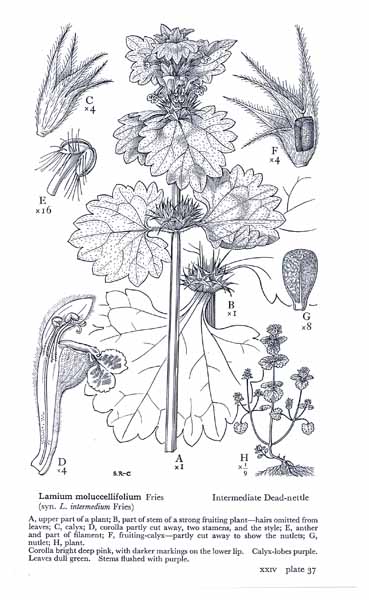 Cuckoo Pint or Lords and Ladies 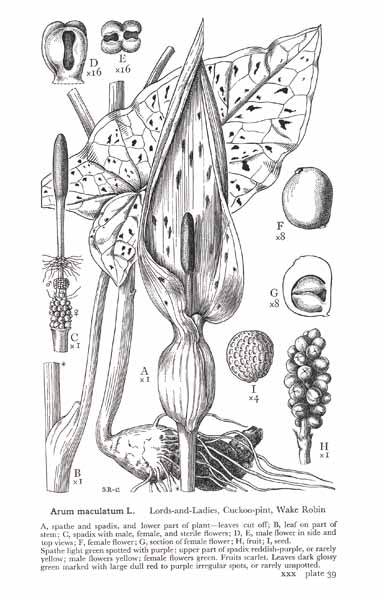 And the lovely drawing of the Blackberry, well, one of the 13 plates titled “bramble” I had no idea there were so many different varieties of wild blackberry in the UK.
She writes in the introduction to the section,

” fourteen species of the subgenus Eubatus (the blackberries and dewberries) were all growing in Surrey where I could observe them throughout the year. First year stems and flowering shoots were taken and the bushes marked. Later in the year the fruits were collected from these marked bushes – a race with two legged predators lending a spice of excitement to the work! “ 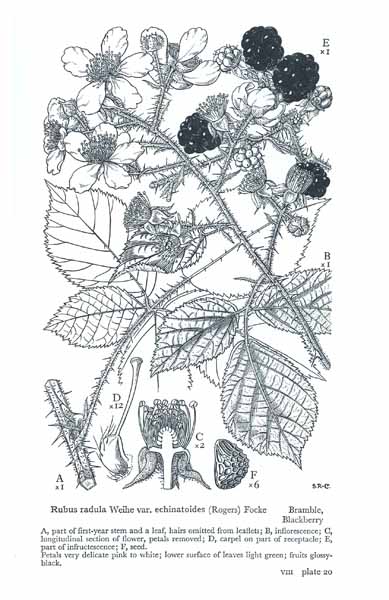 These days such modest looking drawings are easily overlooked, often only appreciated and used by botanists for identification. They are beautiful because of the sureness of the line, the clarity of the information provided and the arrangement on the page. The sheer skill in drawing in pen and ink to this quality and keeping that quality consistent over so many years is breathtaking. Should anyone doubt that, they should try to draw two parallel curving lines, freehand with a technical pen. There is much more “art” here than in many paintings I see in galleries today, it’s just quieter.
I am in total awe of this lovely work, her accomplishment and dedication.