Leaf of the Day: Tea and Tornadoes

We are on tornado watch today, looking out for “tornadic activity”. I had to go out but was careful not to wear my red shoes and Toto had to stay at home with Ant, although it is just the season to whisked away on some exciting holiday adventure. I don’t think we did actually have a tornado just very blustery heavy rain so it wasn’t too bad. It’s shaken a few leaves down and I am sure there will be some fallen fruit at the Gardens when I go tomorrow.

On my last visit to Leu I collected a couple of tiny seedlings from the ground around the Tea Camellias,Camellia sinensis. I would be so pleased if one of these grew. These and the Lipstick tree, which at the moment is looking glorious with its red spiky pods, were the first plants that Pedro wanted me to see in the Garden…the tea of course because I am British and true to form, we do drink lots of tea. I have drawn a leaf and pod before here and I wrote a little bit about tea and my complete ignorance that the tea I drink is from the leaf of a camellia. At the moment it is in full bloom and so pretty, the small flowers are very delicate and the whole bush is alive with bees, so I wanted to make a few more studies while I can. 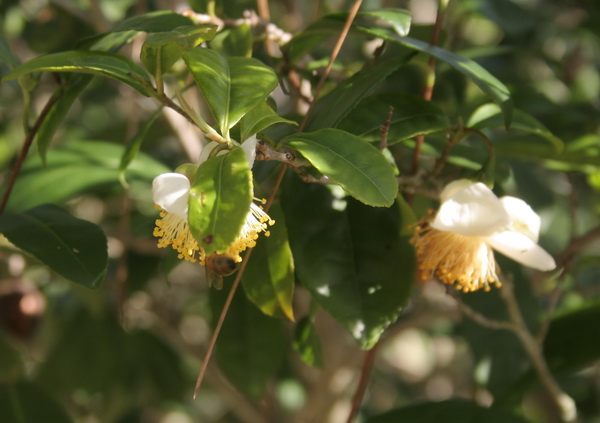 There is so much to write about tea, its history, its complicated and precise preparation, the rituals and very individual ways of drinking it: black, white, with or without sugar, lemon or not, tea bags or loose leaf, brewed in a tea pot, in a cup, served in a mug, in fine bone china, etc… etc…all so personal.

The tea-plant originated in southern China, and was thought by the Taoists to be an ingredient of the elixir of immortality, a belief still held dear by many British people today. It was claimed to relieve fatigue, delight the soul, strengthen the will and repair the eyesight The Buddhist monks drank tea to keep awake while meditating and there is a rather gruesome legend which says the tea plant grew from the eyelids of Bodhidharma who cut them off in disgust at his own weakness in falling asleep during a particularly long meditation. He thew them down on the ground and from the eyelids sprang the tea plant, a gift to us all to aid alert meditation.

On a more lyrical note there are several Chinese poems about tea translated by Martin Tai here This a beautiful poem from the Sung Dynasty about the making of tea written by Su Dong Po, with a note by the translator.

“Fetch water from the river to brew tea
Living water must be boiled with living fire
I fetch deep clear water by the Fishing Rock
A big bucket saved the moon into a jar for spring,
A small scoop divided the stream into a bottle for the evening“

This poem has a distinct style, it described the essence of tea brewing: tea must be brewed with living water, with out it one cannot extract the full aroma of tea. Dong Po knew this very well indeed. I lived at Fu Sa county for a while, and did fetch water from the river to brew tea; the color, aroma and taste were excellent on all three counts. That location also produced the best tea in the world, probably due to its water. Brewing tea with such water enhanced the aroma. Even cloth washed with this water looked extra clean and white, this is an indication how light and clean the water was.”

Ah yes, how very important the water is! Tea made with limestone filtered water of Linconshire tasted so different from the tea brewed with soft Yorkshire water. My father used to long to get back to a “good” cup of tea after visiting our relatives in Leeds.

The painting is of one little seedling complete with its pod. I doubt this one will survive having been out of the water for too long. I feel guilty. I have put it in pot with the others to salve my conscience. Tomorrow a flower and maybe a pod. 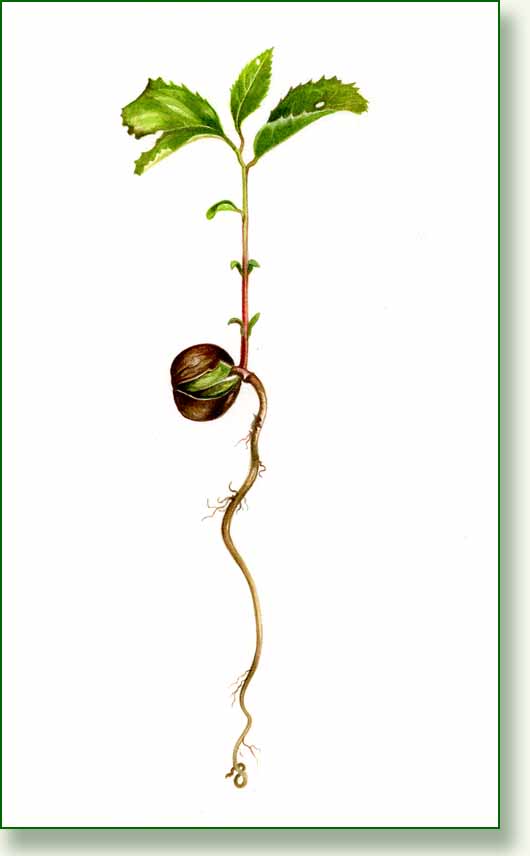