Leaf of the Day: The Sausage Tree and The Perilous Bench

Oh the wonderfully funny sausage tree .. It elicits the silliest of behaviour from everyone and must be one of the favourites in the garden, with children and open-minded adults alike. 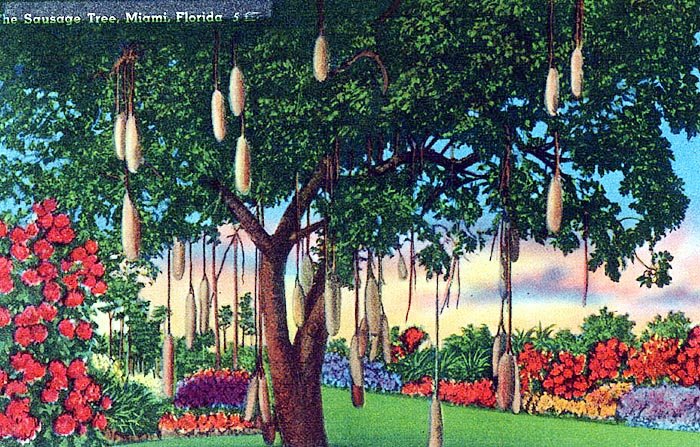 My introduction to the sausage tree was probably on my third visit to Leu. I was walking down by the cycads lost in prehistoric musings, when I heard helpless and uncontrollable giggling coming from an adjacent path, the kind of giggling that only women are capable of and makes you want some of whatever they were having. I couldn’t imagine what was going on. All would be quiet for a moment or two, then another great wave of hysterical laughter would break out. By the time I arrived, three middle aged, elegantly dressed ladies were convulsed with laughter. Tears were streaming down one woman’s face as each was taking her turn to have that photo-of-a-lifetime opportunity with the wonderful sausage tree fruit. It must be my funniest experience at the gardens to date. In between their giggles they explained they were on holiday, the men playing golf while they were garden visiting …I wonder who had more laughs that day. 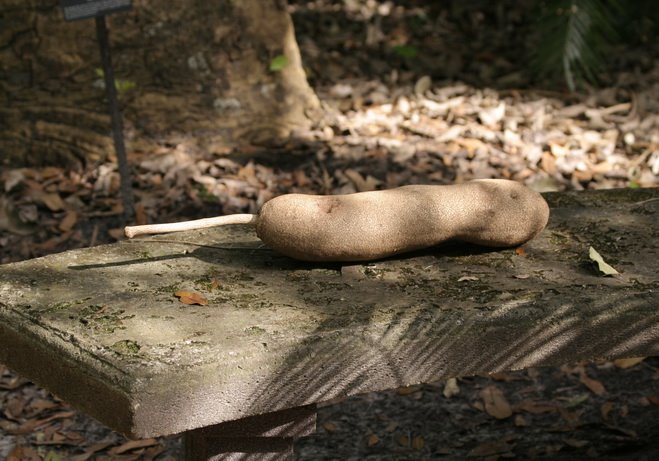 I was prompted to write this post because two aspects of yesterday’s Midnight Horror Tree reminded me of the Sausage Tree, the flower and the sword of Damocles, and the two trees are in fact related, both from the Bignoniaceae family.
I had only seen a fallen flower from the sausage tree before but remembered the trumpet shape. Now I see the exact same internal arrangement of the stamens. This is because they are both bat pollinated flowers. 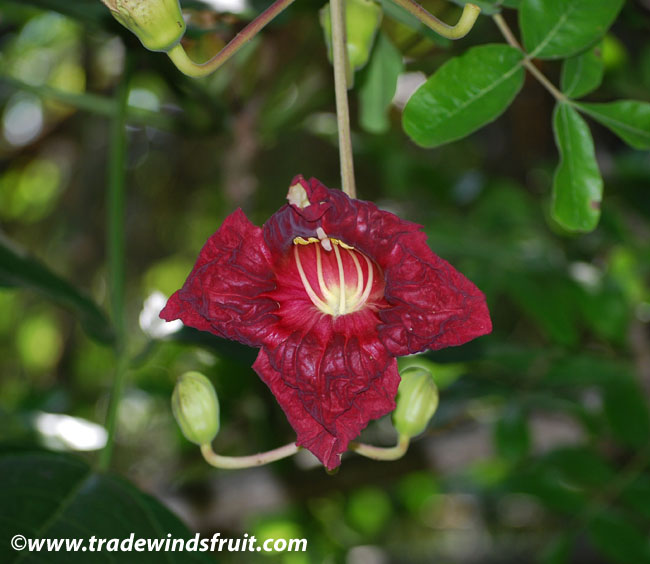 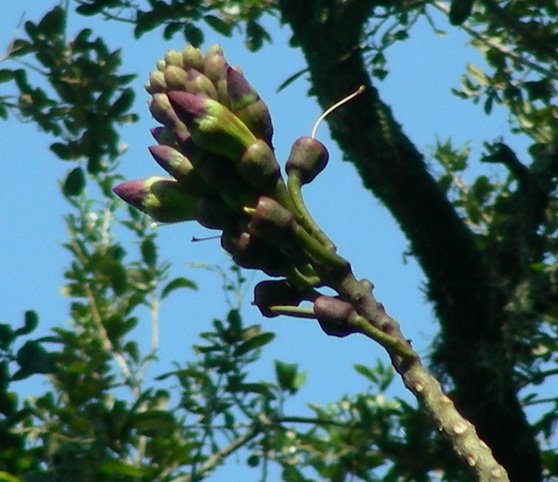 And the Sausage tree spike… 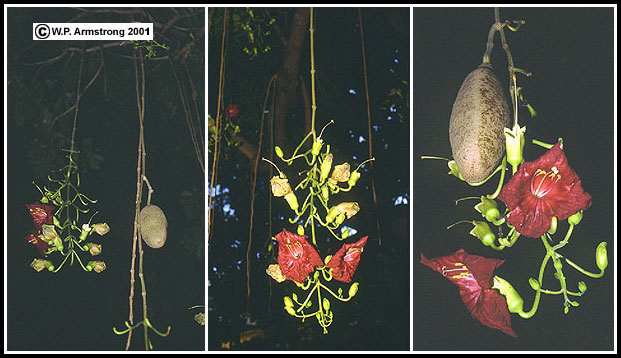 This image from the excellent Waynesword site here

To access the nectar, (sometimes as much as a teaspoonful) at the base of the flower the bat must push its head well into the flowers corollary. You can see the stamens are positioned so as to deposit pollen on the bat’s head. It will then visit, hopefully a different tree and pollinate another flower. The trees are not self pollinating and need another tree nearby to successfully produce fruit. I had thought this was the only one at Leu but yesterday, on another off path exploration, I found a second one! ..another reason for this post!

However fruit eating bats are quite rare in Florida and according to Tropical Designs of Florida.com here (A site all about growing things in south Florida) birds may be the pollinators
“When a tree is found with fruit they were probably visited by the native Red Bellied Woodpecker or the Spot Breasted Oriole. These two birds sometimes visit the Sausage Tree in the evening just as the flowers are beginning to open, apparently looking for insects that are attracted by the nectar found inside the flower. The head of the Woodpecker is the right size to pick up pollen from one flower and carry it to another, similar to the way the bats do. The Spot Breasted Oriole, which was introduced from Mexico and has naturalized in South Florida, is the same size as the Woodpecker and also causes pollination. “
Certainly the tree at Leu is happy and very productive. 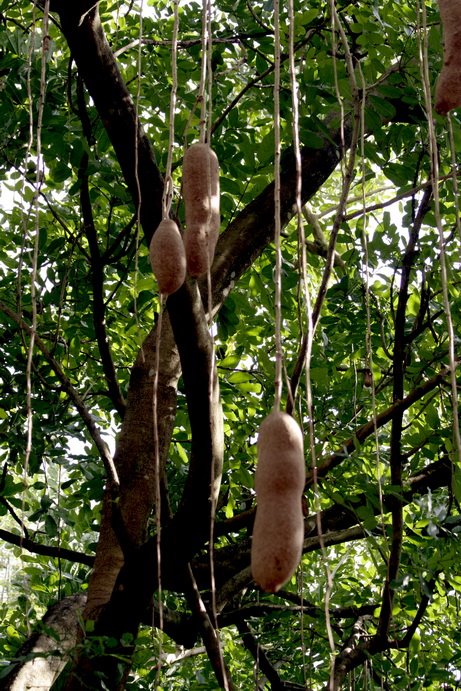 The other reminder from yesterday’s post was the legend of the sword of Damocles and what I have termed “the perilous bench”. The giggling ladies were having their photos taken sitting on the bench which is positioned under the sausage tree, a nice shady spot to rest for a while, until you look up and see, hanging above your head by that horsehair thin string, the enormous Damocletion pod. Normally there are a couple of pods displayed on the bench. I have speculated that the reason is less about public information and more about public safety.
Should one of these happen to fall on you, you would certainly sustain some damage, perhaps more to your pride than anything else ..it would be terribly ignominious to be dispatched to the next world by a sausage tree fruit wouldn’t it?
Enthusiatic planters are advised to locate these trees carefully, car parks are not a sensible site and I am sure the gardeners at Leu do some judicious pruning.

I thought the insides of these extremely heavy pods might contain some lovely arrangement of interesting seeds but there is just dense fibrous material embedded with small seeds. The pods can be well over 2 feet long and weigh 20 pounds.

Some practical information about the sausage tree. It is a native of Africa and likes riverside locations where the pods are enjoyed by hippos, elephants, monkeys, and giraffes and the leaves are an important source of fodder for cattle. Uses for the fruit vary from, ingredients in skin cream preparations and shampoos, additions to beer making to hasten the fermentation process, as a powerful purgative and evil eye protection. As you can imagine it has inspired many local names, many no doubt unprintable but including one, in South Africa, that means ‘the fat tail of a sheep’.

My drawings today are of a leaf, from the new found tree, and the remains of one fallen and dried-up pistil which I have had for some time. The shrivelled up central part would have become the sausage. The sausages themselves are not very exciting to draw and, well, the thought of trying to get one of these monsters home in my back pack on the bike is just too silly for words. Imagine being stopped by the police as you wobble your way along the highway with an enormous pod. (Incidentally the Arab name for the sausage translates as the ” father of all kitbags”).
So I sketched the perilous bench instead, just as it was today ..complete with two warning examples and an ominous hanging pod above.
_________________________________________ 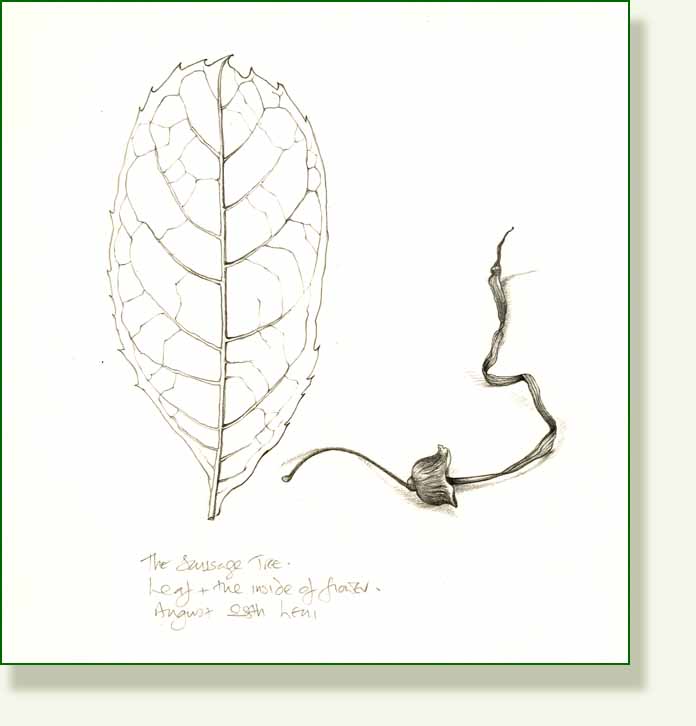 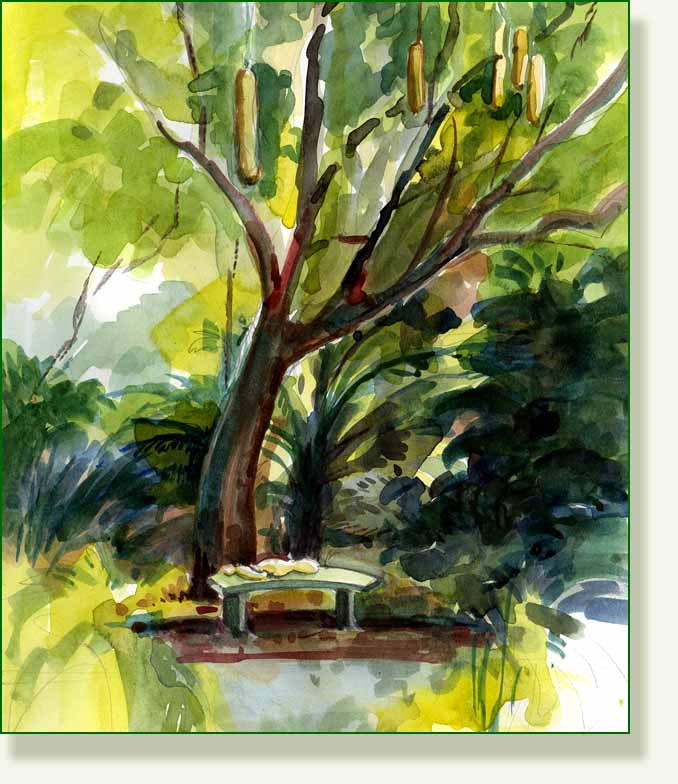