As June heats up so does the frequency of the storms in Florida and we are having quite a few of them right now, the thunder is ear splitting and the rain torrential, but storms do have a good side. They wash away grime and clean the streets, nourish the plants and given the trees a good shake up. Storms are especially good for a leaf collector and especially for one of a smaller size, like myself. The day after a good storm the ground is littered with debris and leaves and pods and fallen flowers, many of which are normally too high for me to reach. This pignut hickory is a case in point. I have walked past this tree many times and not even noticed it. It stands at a junction of paths at Leu so you are always on the way to somewhere else, but after the storm the path was covered with the big greeny yellow tear shaped pods of the pignut hickory.
This tall beautiful tree Carya glabra is one of the Juglandaceae, the Walnut Family ,related to the pecan tree (Carya illinoensis) and black walnut (Juglans nigra), two of the most important native nut trees in North America.
The nuts inside these attractive green husks are bitter but very much appreciated by squirrels, chipmunks, raccoons, black bears, foxes, rabbits, birds, smaller rodents, and whitetail deer and pigs I guess!
In the UK we would come across hickory in the form of hickory chips which, when the variable English summer allows us a couple of balmy days, we enthusiastically throw on the BBQ to give us that “authentic” smoked flavour …in case we don’t already have it from those delicious incinerated chicken legs and charred sausages.

The word “Hickory” is a derived from the North American Indian word ‘pawcohiccora‘ which is an oily milk-like liquor that is pressed from pounded hickory nuts. `Pohickory” was mentioned in a list of Virginia trees published in 1653 and subsequently shortened to `hickory.’

Willam Bartram here refers to the hickory milk made by the Creek Indians.
“The Creeks store the nuts in their towns. I have seen above a hundred bushels of these nuts belonging to one family. They pound them to pieces, and then cast them into boiling water, which, after passing through fine strainers, preserves the most oily part of the liquid; this they call by a name which signifies hiccory milk; it is as sweet and rich as fresh cream, and is an ingredient in most of their cookery, especially homony and corn cakes.”

The fine dense wood has exceptional shock absorbing qualities making it very useful for early wooden wheels, and like Yew, a good wood for tool handles and bows. Golf club shafts used to be made of hickory and are still referred to sometimes as ‘hickory sticks’ and in earlier days of stricter education, hickory wood, being nicely flexible, was put to, no doubt painful, use as the ‘cane’.
On a more pastoral note early settlers were able to boil the bark in vinegar to extract a black dye.

The drawings show the closed whole pod just beginning to split and two old blackened relics of split and empty husks which I found, squirrel chewed and broken, at the base of the tree… and of course… in ‘homage ‘..a pig. I haven’t yet drawn the actual nut from inside yet. 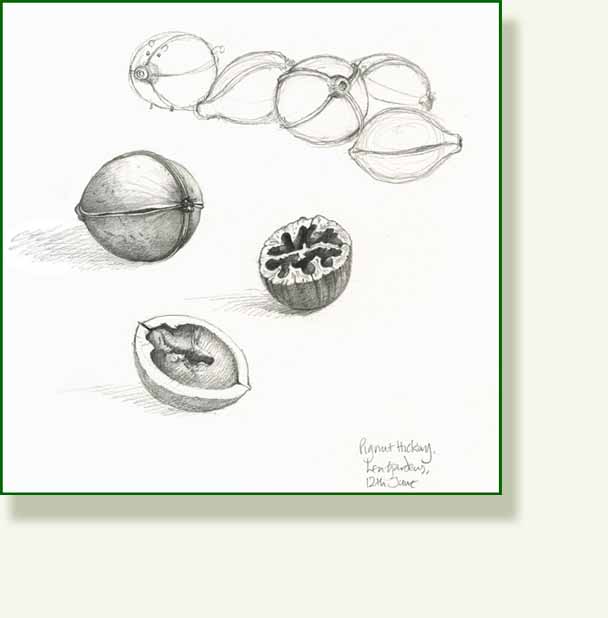