I could fill pages and pages of this blog with gorgeous images, superstitions, poetry and folklore about this magical and unruly night. The night of the faeries in all their whimsy, mischief and malevolence. If ever I had childish dreams of being an actress it was ‘A Midsummer Night’s Dream’ that had me enthralled. The problem with attending an all girls school of course is that someone has to play the male roles…and someone has to play Bottom. My teacher said it was a key role and needed the talents of a fine actress…Ah well ..it was better than being a voice off stage and I got to make my very own lovely papier mache head. 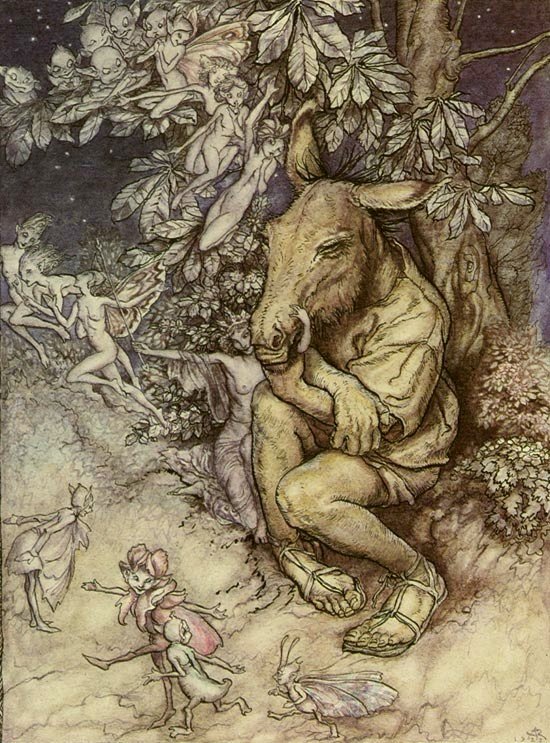 I was steeped in fairy stories as a child having constantly read two ancient and now crumbling books of Old English Fairy Tales illustrated by J D Batten. If I had to trace back the real roots of my love of illustration, black and white images, and storytelling it has to be these two volumes of dark and cautionary tales where every narrative is heavily laden with the dire consequences of taking the ‘wrong road’ in every sense. 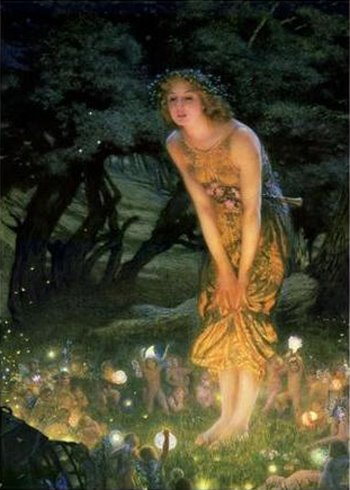 The 23rd of June is the old Midsummer’s Eve and the night of the year when ‘faerie’ spirits are especially powerful and flowers gathered on Midsummer’s Eve can work magic. Puck uses pansy juice as a love potion to wreak some romantic havoc (see also my post on pansies.) Cutting a rose on Midsummer’s Eve drying it, and then wearing it on New Year’s Eve will draw the attention of the young man you are destined to marry. Wear some thyme, scatter thistles round your cows to stop the faeries stealing the milk, …. and too many others to list.
A very well known practice was the sowing of hemp seed in order to then acquire a lover.

At eve last midsummer no sleep I sought,
But to the field a bag of hemp-seed brought;
I scatter’d round the seed on every side,
And three times in a trembling accent cried, —
“This hemp-seed with my virgin hands I sow,
Who shall my true love be, the crop shall mow.”
I straight look’d back, and, if my eyes speak truth,
With his keen scythe behind me came the youth.

From John Gay’s The Shepherd’s Week, in Six Pastorals, first published in London, 1714.

A particularly chilling practice was recorded by Robert Hunt

If a young unmarried woman stands at midnight on midsummer-eve in the porch of the parish church, she will see, passing by in procession, every one who will die in the parish during the year. This is so serious an affair that it is not, I believe, often tried. I have, however, heard of young women who have made the experiment. But every one of the stories relates that, coming last in the procession, they have seen shadows of themselves; that from that day forward they have pined, and ere midsummer has again come round, that they have been laid to rest in the village graveyard.

Robert Hunt ” The Drolls, Traditions, and Superstitions of Old Cornwall” 1871.

Images of fairies abound but none have really captured the strangeness and sense of ‘other’ as well the Victorian painters whose engagement with this world brought us some strange and wonderful works. For me one of the most compelling has to be Richards Dadd’s “Fairy Fellas Masterstroke”.. here is all the strangeness of fairyland rendered in meticulous detail in a painting containing all the unease of a restless laudanum induced sleep and harking back to the nightmare lands of Hieronymus Bosch. 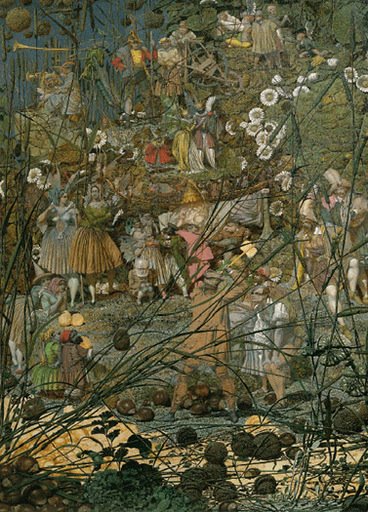 I will be coming back to this painting in more depth..it needs to be looked at in detail, both the painter and the painting are fascinating and it has some interesting things to say, about plants as much as fairies.

But let’s leave the dark side and let’s be reassured that the true spirit of beauty and grace is still alive and well and that Shakespeare’s heroine has found her most sublime embodiment in none other than the lovely Barbie..
At Amazon from a mere 139 dollars, New or “Used” (.. oh dear.. the mind boggles)…a collectors edition..
“Barbie is ethereal as Titania, Queen of the Fairies, from the ballet “A Midsummer Night’s Dream.” Barbie has long golden curling hair decorated with flowers. Her frothy costume is shimmering blue-green taffeta with a full tutu skirt in blue, green and pink. With tiny “wings” of taffeta, she appears to float. Tiny purple ballet slippers on her pointed toes let her dance into your heart.” 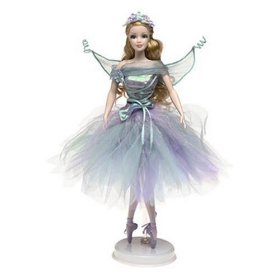 This gorgeous silver label creature is awarded stars based on these telling criteria, “Fun” (oh dear) .. “Durability ( oh dear god no ) and “Educational” ( ?).
Satisfied customers are ecstatic and I am empathetic…

I am glad that she rates a full five stars for educational value for ‘the link to Shakespeare’s play Midsummer Nights Dream, and the chance to learn the play’
I am sad that ” they did not give her Elven ears!.. after all she is the queen of the fairies! “ ( which I first read as eleven ears and whoops! .. the product development team not attending to details here!!)
I am enchanted by her “Her rooted eyelashes and glittery eyeshadow which emphasize her lovely face. ” and ” the unique shape of her wings and the many layers of her fluffy tutu”
I am charmed by her “Classic sur la pointe pose in the toe shoes”

I am lost for words….

Carolyn, this will bring back fond memories of our bizarre former employment and Rebecca, you really need to get one of these as a visual aid for your students.

As for the drawing how can I compete.. but ferns play a big part in these Midsummer Eve superstitions. According to legend if you sprinkle some of the “seeds” in your shoes you will be able to achieve invisibility. and the same seeds are said to protect from evil spirits. Most interestingly, if you find the yellow golden fern flower, which allegedly blooms at midnight on Midsummer’s Eve, you will be guided to treasure either by just throwing it in the air or climbing a mountain holding the flower.. Hmmm…well I won’t be staying up… but I will sprinkle some of the tiny spores into my purse to help the money situation!
Here is a drawing of just one fern leaflet of the beautiful Nephrolepis falcata, the Fishtail Sword Fern. This is a very handsome fern with these big divided leaflets. This one has the sori .. shown as little bumps on the surface and more noticeable on the reverse. 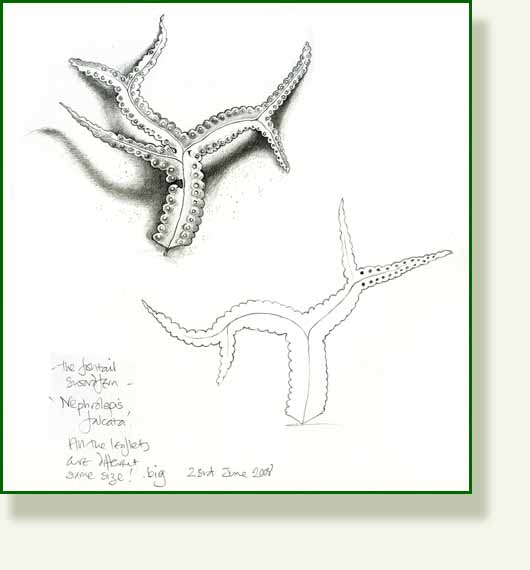