Liquid Amber, what an evocative image, Liquidambar styraciflua is the Latin name of the the American Sweetgum with the annoying balls. After writing about the non fruiting variety yesterday I decided to go and find one of the more common sweetgums at Leu and I found another 3 varieties.

The regular American Sweetgum Liquidamabar styraciflua. Loved for its autumn colour, hated for its balls. 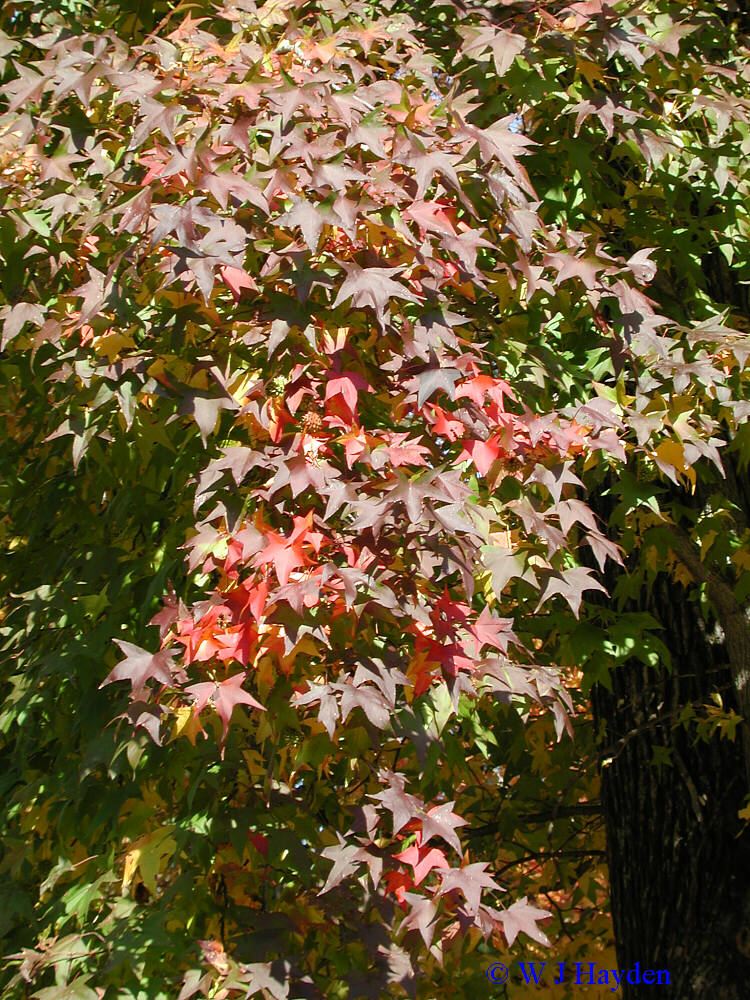 The Formosan Sweetgum, Liquidambar formosana originating Formosa (Taiwan) with a different leaf shape and gumballs which are more delicate and would be a little bit softer underfoot I think. 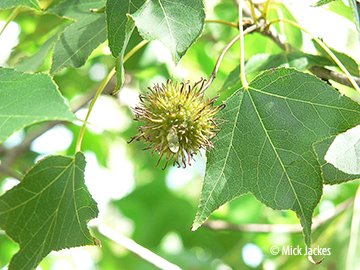 The Chinese Sweetgum Liquidambar acalycina. The one at Leu has a five lobed leaf but apparently comes in 3 lobed varieties as well. 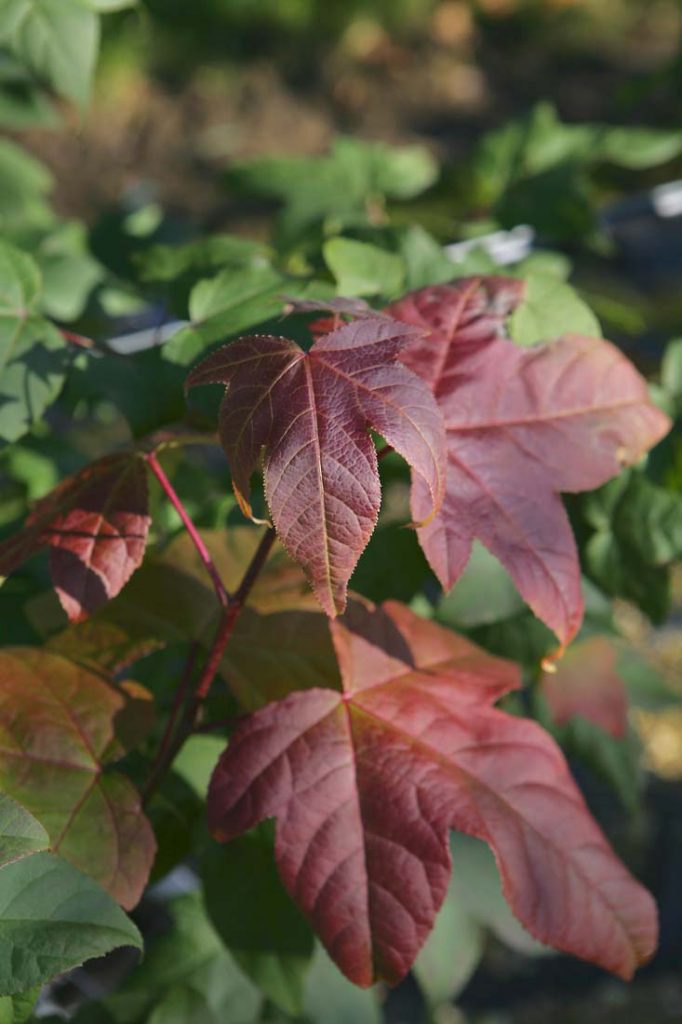 The Sweetgum is a surprisingly ancient species and another companion for the cycads, horsetail and ginkgos. Fossil remains have been found in Europe, Iberia, Colorado and Alaska, dating as far back as fifty five million years with twenty different extinct species being identified and only three remaining now.
The earliest record of the American Sweetgum comes from an account by Don Bernal Diaz del Castillo who accompanied Cortez to Mexico In 1519. Let David Culross Peattie tell you more.

“Out of a bizarre and dramatic moment of history comes like a puff of pungent smoke the first reference to this American tree, It is written by a witness of the ceremonies between Cortez and Montezuma and he says of the Emperor.” After he had dined they presented to him three little canes, highly ornamented. Containing liquid amber. Mixed with an herb they call tobacco and when he had sufficiently viewed and heard the singers dancers and buffoons he took a little of the smoke of one of these canes.” ….Then apparently promptly fell asleep.

The Aztecs prized these trees for their gum and when conquering territories with abundant sweet gum trees, they would demand the resin as tribute.
The gum comes from the sap which gives the tree its beautifully descriptive name and was extracted by a form of tapping. The trunk is peeled in parts, the resin is exuded, it thickens into the amber gum, eventually hardens and is scraped off after a few days. Native Americans and pioneers used this sap for its curative powers and for chewing gum.
This wonderful “amber” is also a relative of the mysterious hard gum which was burned as precious incense in Christan Churches and Indian temples. The source of this amber was eventually found to be from the Turkish species of sweetgum the Liquidambar orientalis and was collected in Anatolia by the Turcomans and sold in the markets of Constantinople.. how very exotic.
The resin was important base for salves, soaps and perfumes and the crushed leaves smell just faintly aromatic. I am going to examine the trees next time I go to the garden to see if there is any available resin to be chewed. .. very good for dysentery apparently. One thing I am curious about. It is reported to be bitter tasting .. so why sweetgum?

The tree was brought to the UK in 1681 by the ill fated John Banister, the collector sent out to the Americas by Bishop Compton, who planted then it in the Palace gardens at Fulham. Banister died at only 38 on one of his expeditions to America but was responsible for sending back the first magnolia seed to the UK.

The pods are indeed very hard and woody and would be painful if you happened to step on them with bare feet, but they are beautiful and hang on the tree all winter like little ornaments..and is there any use for them ? Apart from fun crafts for kids, adding ears and tails to make little creatures, one suggestion is as a slug repellent which seemed a good idea. It would take a plucky slug to tackle a mountain of these to get at a tasty hosta. 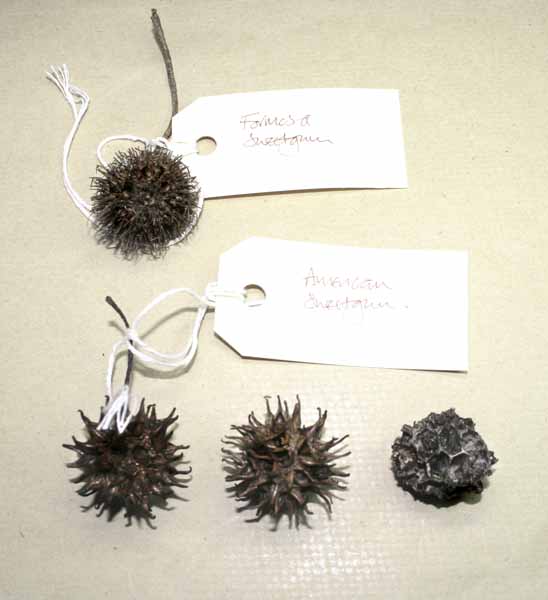 My gumballs.. the one at the top is from the Formosan sweetgum

I have had one of the gumballs for months now, picked up at Bulow Plantation which we visited back in March here and put off drawing it because it is so complicated. The one I have drawn is open and the seeds have gone. The hard spikes seem to be arranged in pairs which split and open up so the whole thing looks like a nest of tiny baby birds with their mouths wide open. I also found one newly fallen with the spikes closed. These trees are so big that all the other leaves and fruits were out of my reach. 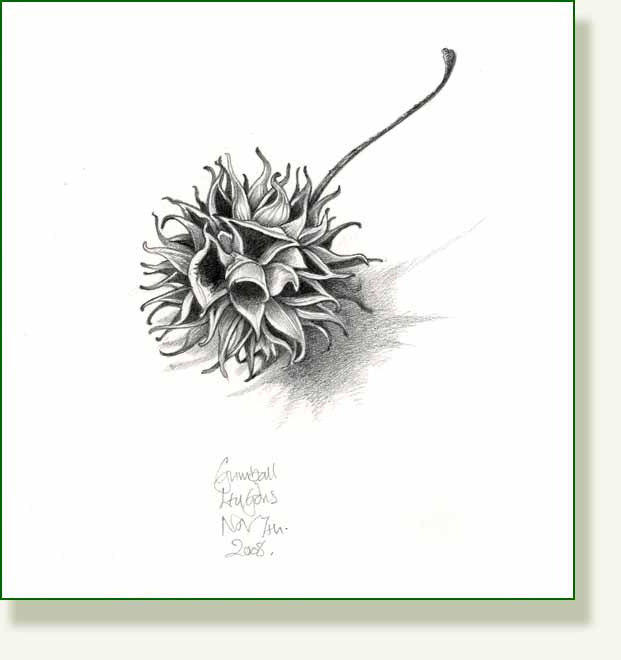 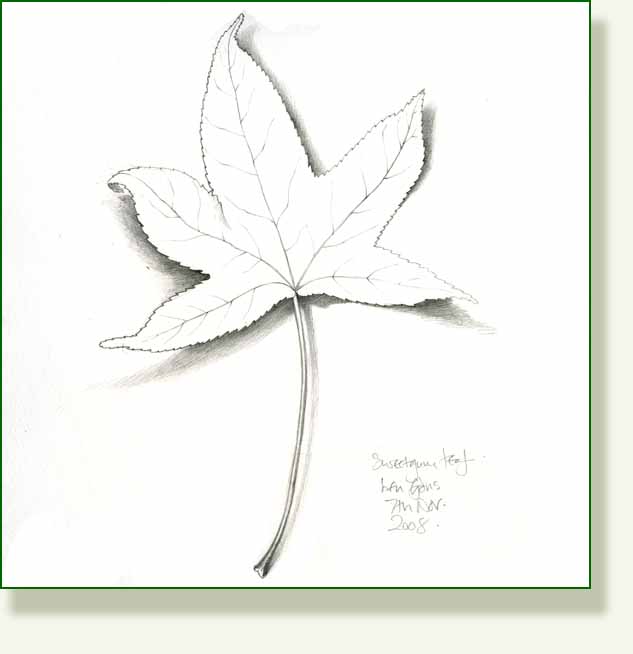 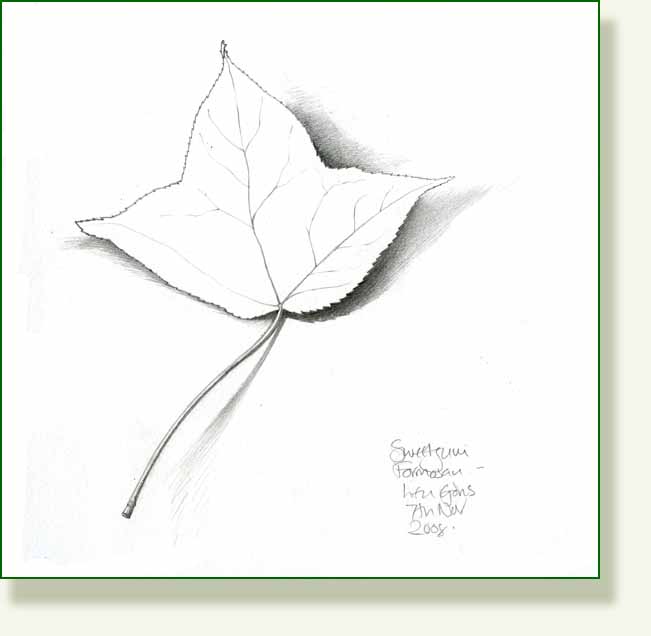 I am aware that the deciduous trees are rapidly losing their leaves here and so I am trying to record them before it is too late, for this year at least. I bought back a bunch of oak leaves yesterday and have spent most of the day trying to identify them and have given up on some! They seem to be particularly unreliable in keeping to a consistent shape per species. That is fine and I am particularly fond of the misfits in life but it is a problem when you are trying to identify them from books or the Internet. Some were labelled at Leu, some I have found locally, and for some I have the labels and leaves, but can’t match them up because they look so similar… sigh. Why bother ? Well because I am so interested in the variety of leaf shapes. It’s a simple design but very beautiful and very functional and more varied than you would ever imagine, not only by shape but by texture and scent as well. I came across a leaf the other day that felt like the softest velvet and then there was the horsetail the other day with its sandpaper stems.

But, as I am not getting much further I am abandoning the oaks and choosing a very simple to identify leaf, the Round Leaved Sweetgum which has the glorious Latin name, Liquidambar styraciflua f. rotundiloba 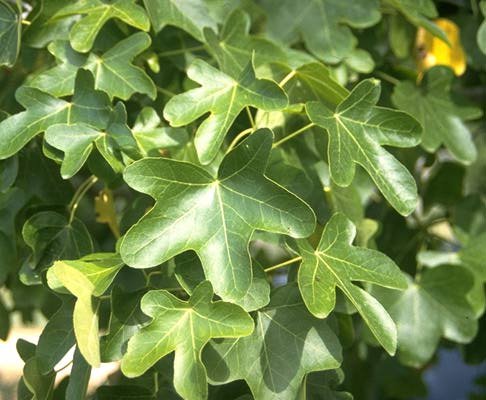 This very attractive tree is different from other sweetgums in two main respects, these lovely generous rounded leaves and the fact it does not bear fruit. This according to some sites is a positive quality in that “No Falling Fruit Means A Tidier Landscape, this one won’t drop annoying gumballs all over your yard! ….”
..and I know many people like their landscapes tidy.

This beautiful tree can grow to a height of about 75 feet and may spread to 50 feet. The beautifully glossy, star-shaped leaves have rounded tips and vary somewhat, some having deeper indentations than others. It has fabulous fiery Autumn colour from reds through to deep purple. 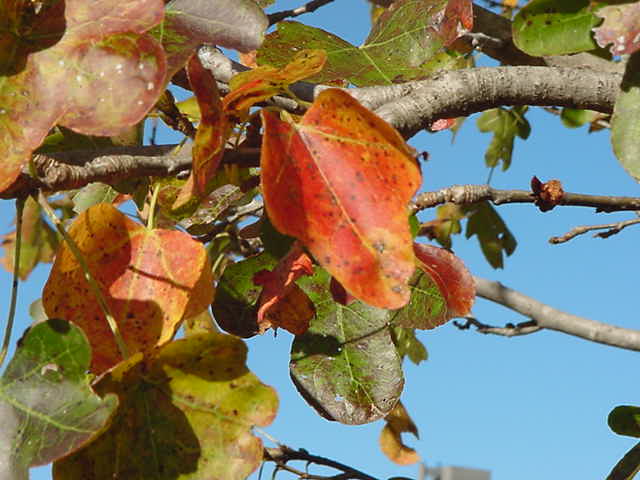 The regular fruiting sweetgums have a place in history and much to tell. I feel I must now get to grips with that spiky little gumball and give it the attention it deserves, perhaps tomorrow. 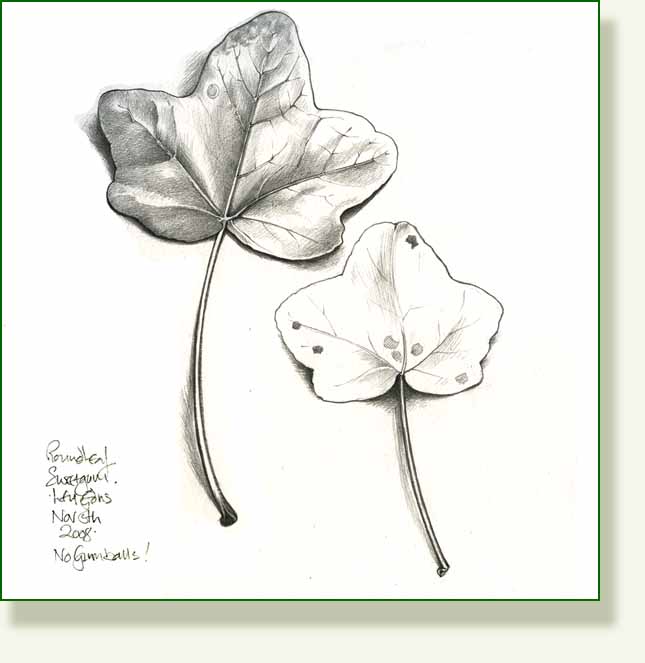