I found quite a few other acacias in the Gardens last week, including the String Acacia, Acacia stenophylla, the Sweet Acacia, Acacia farnesiana, the Umbrella Thorn, Acacia tortillis, the Fever Tree, Acacia xanthophloea and this tall and ” leafy” Acacia holosericea. 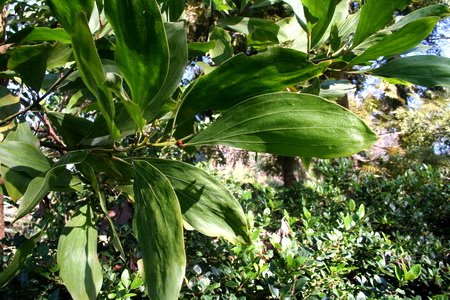 This is a fascinating tree for so many reasons, not only does it (just like the soapberry) have fish stunning and soapy properties but parts of it are edible and it falls into the “when is a leaf not a leaf ” catagory.
The big sickle shaped “leaves” which make this tree so beautiful and densely shady are just modified stems, i.e. phyllodes. When young these leaves have a silky texture earning it the additional name of the Velvet Wattle.

“This is an acacia of northern Australia. useful species for fuelwood, charcoal, windbreaks and soil conservation. The hard dark brown heartwood can be turned into small decorative items. It splits easily, dries rapidly and makes an excellent fuel. Northern Australian Aboriginal people used it for many purposes; different parts of the plant were used to make bush soap, medicines, fish poison and spear shafts. The seeds can be ground into flour and used in cooking.”
from Grassland Species Website here

“Bush Tucker: Trials have been conducted in Africa by Australian aid agencies that have shown that the seeds of Acacia holosericea are a very nutritious and popular food. They have a high protein content – 17-25%. It is hoped to use the plant widely in revegetation schemes.
The seeds were roasted, boiled like lentils, or steamed with vegetables. Children particularly liked the nutty flavour of the roasted seeds.”
from ‘The Society for Growing Australian Plants’ here

The “soap” comes from the sticky green pods, which can be wetted and rubbed or crushed together produce a soapy lather.
There are pale yellow cylindrical flowers which appear in clusters, and give it yet another name the Candelabra Wattle 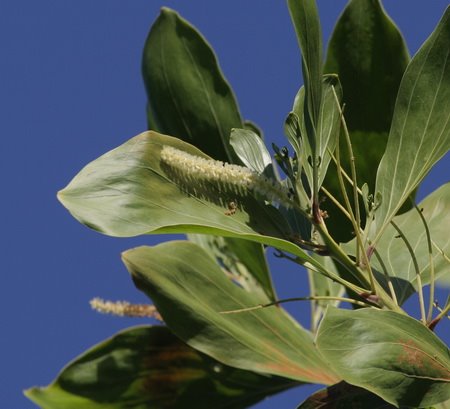 This photo was taken back in December, before I knew what this tree was. The flowers were nearly over so there should be pods developing very soon. 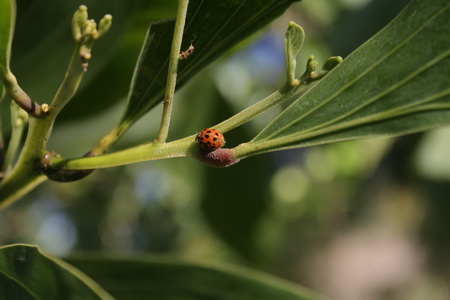 Until I started researching fish poisoning, I had no idea that it was so widespread or that so many plants could be utilised for fishing, but here is how to do it with the holosericea in Australia.
This is from the “Uw Oykangand and Uw Olkola Multimedia Dictionary” site here, all about the Australian Aboriginal languages spoken in the central Cape York Peninsula Australia. It’s a fascinating site which describes the uses of natural resources as well as the language.

“With soapy tree, soapy wattle, Acacia holosericea, and the fish poison tree, Acacia ditricha and freshwater mangrove, gather the leaves and put them into a dilly bag. Rub the bag in the water until a soapy foam comes out. This stuns the fish in the waterhole and they float to the surface. They may then be collected and eaten.
There is a great deal of ritual surrounding this method of fish poisoning. For example, the men work and remain separated from the women and children. Also, since it may take several hours for the leaves to have their effect, it is usually left overnight or longer and the old men wait by the water in the morning. They sing out to signal that the waterhole is ready to be harvested, and go down to collect their fish first. Everyone else may go down after them.
An interviewee, Lofty Yam explains:
” They sing him, old paten. Watch everybody, not to catch any of them fish, they don’t like. . ..That feller still singing, watch everybody, not to take them fish before time, you know. Take ’em right time.”

The active ingredient in this acacia is “rotenone” an alkaloid toxin, luckily only toxic to cold-blooded creatures which stuns fish by impairing their oxygen consumption whereas the chemical in the soapberry fish poison is “saponin”.

For even more about fishing this way around the world see an interesting article “Fishing with Poisons” by Chuck Kritzon here from Primativeways.
I don’t really think I will be trying it in the lakes of Orlando. By the look of some of the waters I am surprised there any fish in there at all, but with all the city effluents and pollution they are probably immune to a bit of rotenone and who knows what effect it might have on the alligators.

The leaves may be silky when young but these recently fallen leaves are as tough as old boots with strong raised lateral veins. It was only when I had drawn them that I realised they looked rather like two washed up fish ..ahh.. 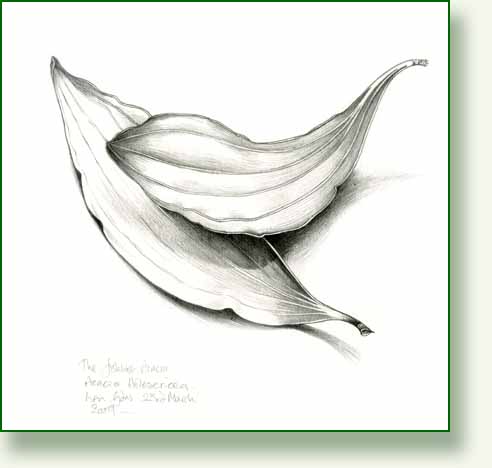