The gorgeous handsome Long Horned bee Eucera longicornis with his wonderful long curving antennae had to be included in the British Bee set although they are quite rare. In the UK you may catch a glimpse of one depending on where you are.
Go to the BWARS great interactive maps to see which bees you can see where in the UK. Here are Jeremy Earley’s notes from the excellent “Woodland and Hedgerow bees” part of his Nature Conservation Imaging Site:

“Eucera longicornis is scarce and was made a Biodiversity Action Plan priority species in 2007. They are seen from May to July in various locations including coastal grassland (the Isle of Wight is good) and heathland as well as open woodland rides. They use only the Pea family for pollen collecting.“

So you might be lucky! It would be wonderful. I did see a small bee with very long antennae here last year which could have been a squash bee.. but of course no camera at the time.
I painted this bee before back in December for Deborah’s set “Eucera the Curiously Goat-Like Longhorned Bee. Eucera nigrescens

There is another longhorned bee Eucera nigrescens which is even rarer in the UK but can be found in Europe and has been chosen as the Swiss conservation group Pro Natura’s “Animal of the Year “ for 2010. From an excellent article on Swisster.ch here :

“By choosing this particular bee as its animal of the year, Pro Natura has highlighted the fragile balance between the world’s flora and fauna. Part of the reason for this is the lack of suitable accommodation. Wild bees such as Eucera nigrescens build their nests in the ground, typically in meadows, gravel pits, fallow land and orchards.” 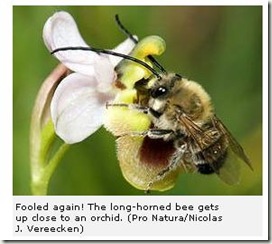 Eucera nigrescens and another of Nico Vereecken’s wonderful photos from another short article at Swissinfo.ch Read more here.

“Eucera nigrescens , is described by Pro Natura as a “furry pollen taxi”. It plays a vital role in pollinating the Ophrys holosericea orchid.”The orchid fools the insect by imitating the shape and smell of the female. The male bee comes along to mate, and receives a load of pollen instead, which it passes on to the next plant it visits.”

The Ophrys orchids, often just referred to as the “Bee orchids” are the bizarrely beautiful orchids whose flowers have developed to resemble the furry bodies of bees and other insects (reproductive mimicry).
Some emit pheromones which are attractive to male Eucera Andrena, Anthophora, and Colletes, bees, who are tricked into trying to mate with them.
We do have the Bee orchid O. apifera in the UK and you might think it would be a good place to spot a long horned Eucera bee but apparently they have become self pollinating .. how curious?
Is this because of a lack of suitable bees? I had hoped to be drawing a bee orchid for this exhibition.. another time. This is from Dr. Alan J. Silverside’s excellent page on the British Bee Orchid on the University of Paisley’s Boidiversity Reference site here

“The genus Ophrys is a large and predominantly mediterranean genus, with just a few species reaching Britain. O. apifera is much the most widespread and frequent of these. It has to be admitted, however, that O. apifera is not a good example of reproductive mimicry, as it is predominantly self-fertilising. It is visited and pollinated by bees of the genera Andrena and Eucera (Lang, 2004), but only rarely, and these are mining bees, similar in general appearance to honey bees (Apis), and so at least visually quite unlike the flower of O. apifera.”

Bee / orchid …orchid / bee? You can maybe judge if you think the plants do a reasonable job, compare the female bee below with the orchids. 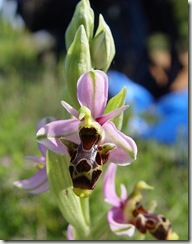 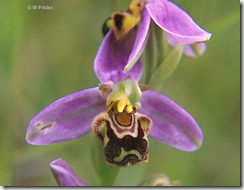 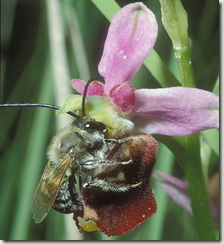 The Spider Orchid Ophrys fuciflora …no ribald comments about the name please : )  with its enthusiastic pollinator Eucera longicornis photographed in the North of France by Eric Walravens from the super Belgian Orchid site www.Ophrys.be.

It seemed a gift that the bee with these wonderfully curving and exuberant antennae should like the pea family Fabaceae with its curling tendrils.
I did wonder if there was any connection? Probably just a coincidence. So here is the gorgeous little furry male Eucera longicornis poised on the curving branch of the Common Vetch, Vicia sativa which can be used for livestock fodder or green manure or just a pretty wildflower. Horses like it too! A few roughs to sort out the curves 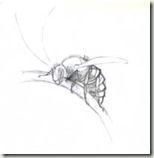 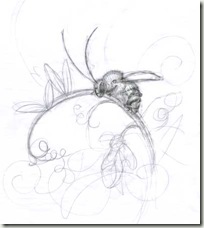 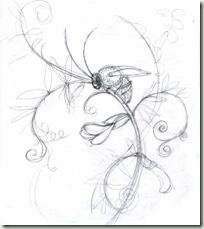 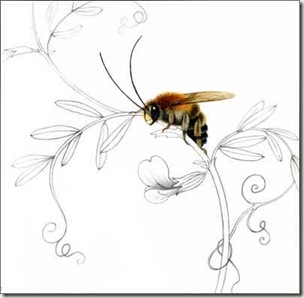