We set off for our impromptu break this morning calling in at Bok Tower Gardens. This is another of the wonderful gardens created by men of vision and lots of money. Edward W. Bok made his fortune during his 30 years as editor of the Ladies Home Journal.
Just after he retired in 1922, he purchased a large piece of of scrub and pine land with the aim of making a bird sanctuary, encouraged by his grandmothers words “Make you the world a bit better or more beautiful because you have lived in it”.
The garden was designed by Frederick Law Olmsted Jr. son of the landscape architect who designed New York’s Central Park and is a tranquil airy place to walk ..and yes there are views from the top of “Iron Mountain” where the strange carillon Tower stands. 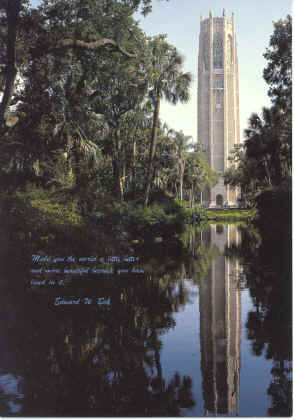 It’s a gothic /deco pink tower with carvings reminiscent of some of Gaudi’s Sagrada Familia motifs. The 60 bells ring every now and then and are curiously unsettling. There were very few people when we were there and there is an air of unreality about it all with the mirrored lake, two picturebook swans, and huge coy carp that come gliding soundlessly towards your feet as you stand on the lake side, waiting for you to throw them some food. They circle and weave before sliding off again to disappear amongst the gigantic lily pads of the Giant Amazon Waterlily, Victoria amazonica 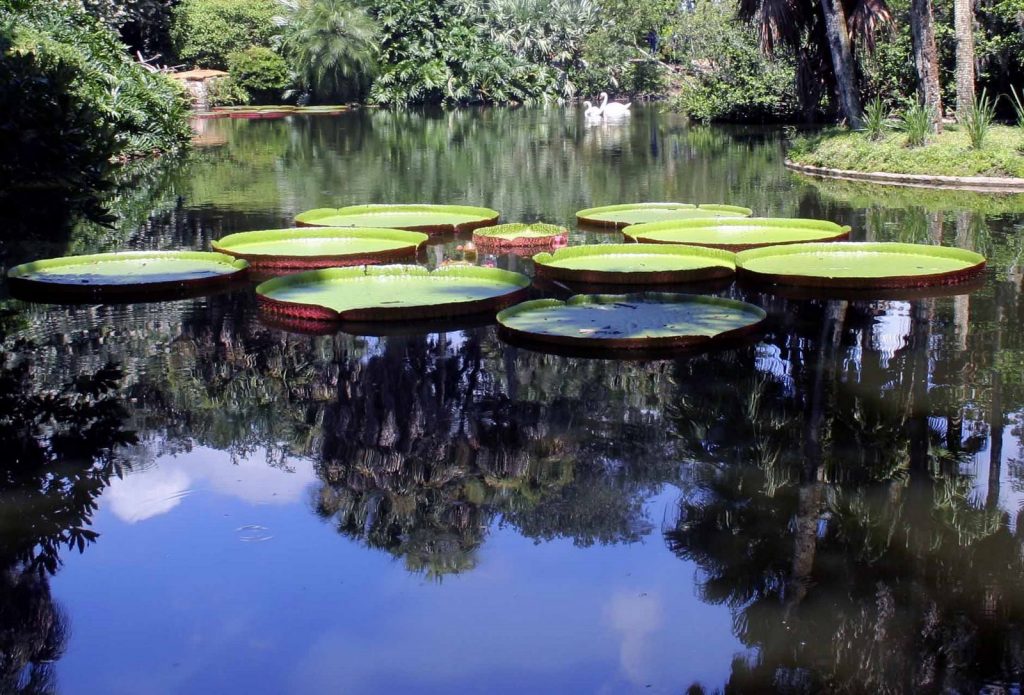 Now here are some leaves to reckon with and I would love to have wrestled one of these into the car!
This monster waterlily from South America was discovered in 1801 and named in honor of Queen Victoria in 1838 by John Lindley, the famous English botanist. Attempts to grow it indoors were thwarted until, in 1849, it was realized that the water temperature had to be above 80 degrees for them to thrive. The first flowering was at Chatsworth under the care of Jospeh Paxton and merited a beautiful folio book, illustrated by Kew artist Walter Hood Fitch.

This image is from the Museum of Wales. UK. which you can see in more detail here 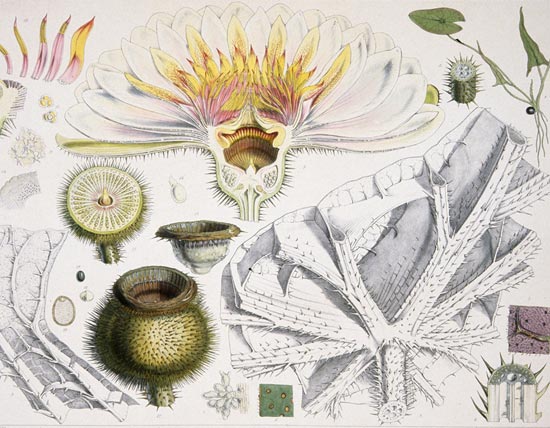 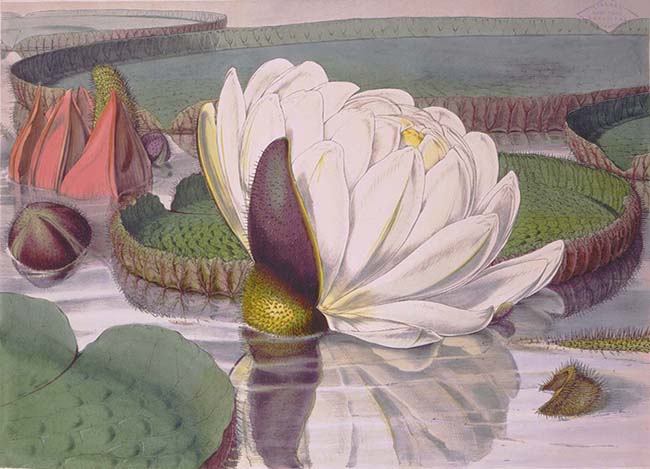 Of course as you can see in the first illustration I would have had some real problems getting one of these into the car. Apart from being huge, a pad can reach up to 2.5 metres across, they are, quite frankly extremely vicious things. In the tranquility of this sylvan scene, the calm outward serenity of these gently floating pads is just masking the fact that the undersides of the leaves and the stems are covered with ferocious spines.
The inch long spikes are to protect the leaf from aquatic pests and I have read that they are toxic, terribly painful and may inject an anti coagulant into the blood stream. Bearing in mind that these grow in waters which are full of carnivores including piranha’s my admiration for the early collectors grows and grows. Even the buds too are covered in spines. 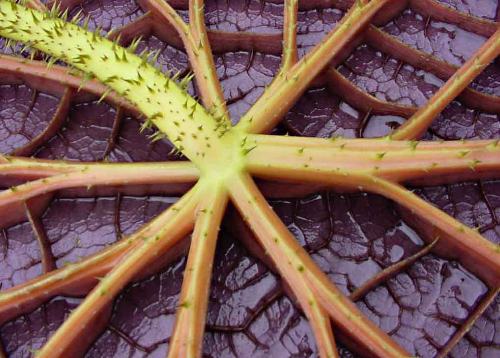 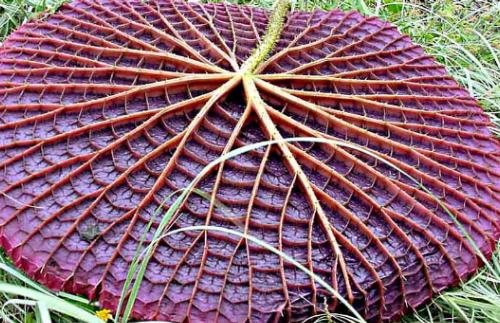 These photographs by Guillermo Angulo of the underside of leaves show the spines and the ribs and are from a fabulous website http://www.victoria-adventures.org/ This must be the most comprehensive site on the Victorias with links to many other sites.
Kit & Ben Knotts tell you all about their hobby-becoming- addiction with the giant waterlilies over a 10 year period. It’s a wonderful collection of stories, advice and photographs and a water plant forum too…they live quite close to us at Coco Beach.

Kew Gardens has more information and a time lapse photo sequence of this extraordinary flower opening and closing over 48 hours changing colour as it goes from white to red. see more from Kew here

Joseph Paxton 1803 – 1865 and The Crystal Palace
A gardener, garden designer and architect.
As you can see the structure of underside of the lily leaves is fabulous, with hollow ribs and a network of veins to strengthen and support the pad while air trapped in between the ribs gives the huge platter a buoyancy ..enough even for a man to stand on the largest leaves. These intricate interconnecting patterns were the inspiration for Joseph Paxton, who as well as being head gardener at Chatsworth House, designed the Crystal Palace for the Great Exhibition in 1851. 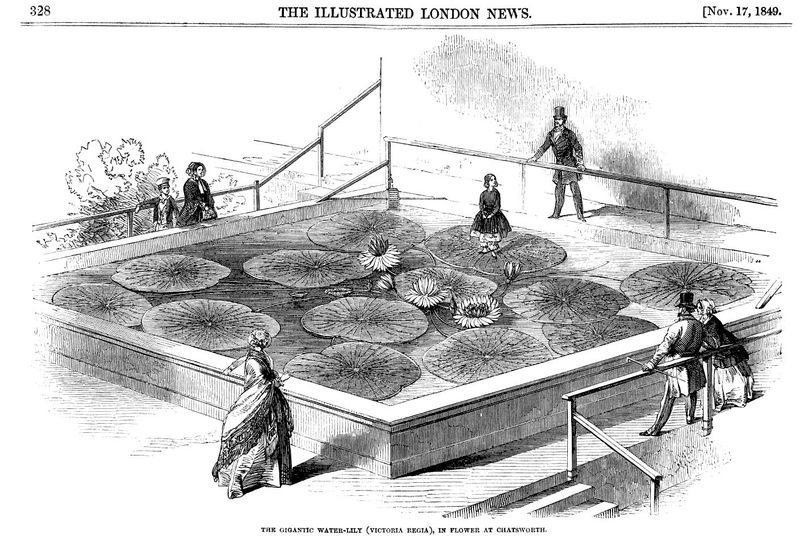 “In 1837 he secured a cutting of a new lily found in Guyana, and designed a heated pool that enabled him to breed the lily successfully: within three months its leaves were almost twelve feet wide. However, the lily was too big for any normal conservatory. Inspired by the huge leaves of the lily – ‘a natural feat of engineering’ – and tested by floating his daughter Annie on one leaf, he found the structure for his conservatory. The secret was in the rigidity provided by the radiating ribs connecting with flexible cross-ribs. Constant experimentation over a number of years led him to devise his glasshouse design that inspired the Crystal Palace.
With a cheap and light wooden frame, the conservatory design had a ridge-and-furrow roof to let in more light and drain rainwater away. Cunningly, Paxton used hollow pillars to double up as drain pipes and designed a special rafter that also acted as an internal and external gutter. All of these elements were pre-fabricated and, like modular buildings, could be produced in vast numbers and assembled into buildings of varied design. 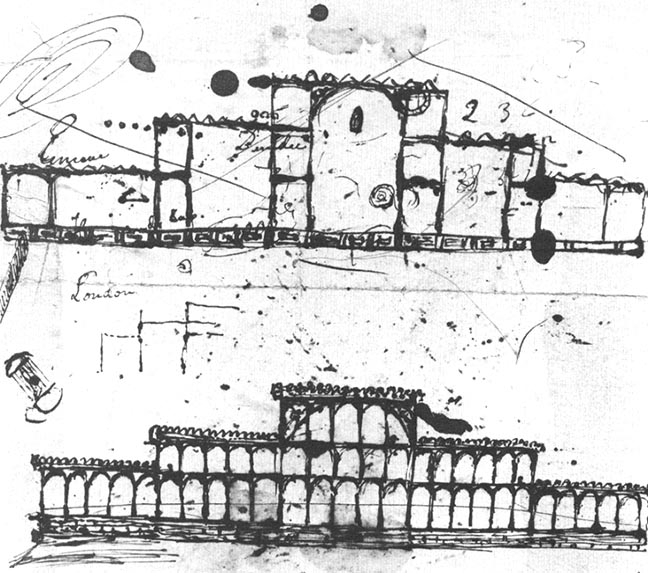 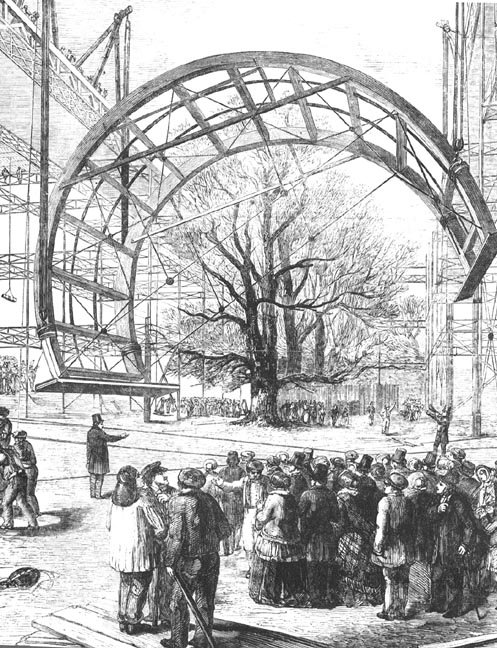 As I have said before, nature’s structures and ingenuity provide such a great source of inspiration. Crystal Palace was “awesome”, in the very correct use of the word. A wonder of steel and glass and Paxton continued to be the head gardener at Chatsworth.

It would be great to go and spend a morning drawing these but there was no time today. There is so much inspiration to be had in terms of size colour texture and design etc. For now here is my photo of the lily at Kew from earlier this year. 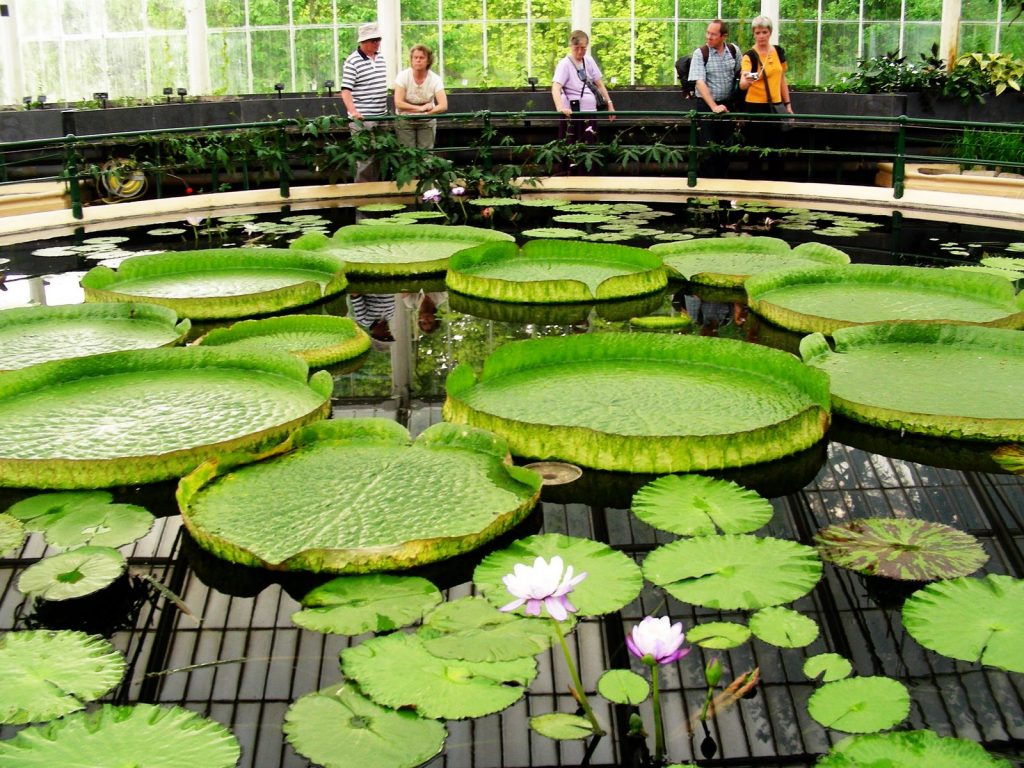