This leaf is so beautifully simple. I had put it in between the pages of a book and it has arrived back here perfectly flat and still green.
I am sure it is a Cottonwood but can’t quite remember exactly where I picked it up except that it was in Albuquerque somewhere. Some research makes me think it is a Rio Grande cottonwood Populus deltoides var. wislizenii a variety of the Eastern cottonwood.

This lovely tree with its shimmering yellow autumnal colouring was a welcome sight to desert travellers. Also known as the “water tree” the cottonwoods need water, so to find a cottonwood was to find water, shelter, fuel and fodder. In the southwestern Spanish settlements it is also known by the name Alamo, giving its name to the famous mission of San Antonio, Texas.
The Hopi Indians used the cottonwood roots for their beautiful katsina doll carvings. It was thought that the roots of uncut trees, ones which had been dislodged by water and naturally swept away, were purer and for the carver to collect the root himself is part of the Hopi’s spirituality. The Hopi word for cotton wood is “paako” meaning water wood. 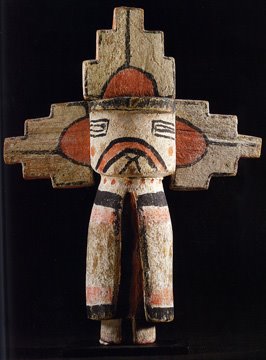 Old Hopi Katsinas are very valuable and much sought after. This one 10 ¾ inches high, depicting the Shalako Mana, carved in the late half of the 19th century fetched $21,600.in a Sotherby’s New York sale in 2006. Kachinas, the catalogue explains, are “spirit supernaturals, once of this world” who live in an underworld with Hopi ancestors and who reappear in the first half of the year when they are personated in dance.”
They are fascinating and I did buy a small book about them and have a few shaky photos from the museum in Flagstaff…more of these later.

This iconic tree takes it cottonwood name from the fluffy cotton of the seeds in the spring. 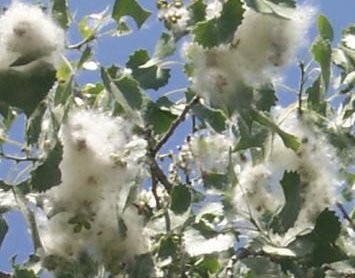 Indians ate the raw catkins of this tree, and made baskets from young cottonwood shoots. The timber provided roof beams or “vegas” for adobe houses and burned on the campfires and in the cabins and of Indians, settlers and prospectors alike. The leaves were fodder for mule deer and horses.

The painters of the southwest painted it many times and still do. This piece is from a sympathetic article by Donald Hagerty about the painter Maynard Dixon who found a land he loved in the West. (from the Medicine Man Gallery website here )

Cabin amongst the Cottonwoods.. Maynard Dixon

“Dixons’s symbolic responses to the West’s landscapes and cultures found their way into his paintings. The cottonwood tree, for example, appeared with increasing frequency after 1930. When enough frosty nights have accumulated in early autumn, cottonwood foliage turns from bright green to a shiny yellow-gold, the glittering trees visible from great distances on the austere landscape. A seasoned traveler in the West’s arid lands, Dixon understood the cottonwood’s promise; its leaves, rotating and rattling, might foreshadow rain; its figure on the horizon was a signpost for water, firewood, shade and shelter. The cottonwood stands alone or in small groves along watercourses. It prefers solitude, as did Dixon himself. He made the cottonwood a personal symbol in his art in the last fifteen years of his life, painting many canvases of a tree which tolerates little between it and the sun and wind.
Willa Cather wrote that cottonwoods are wind-loving trees whose roots are always seeking water and whose leaves are always talking about it, making the sound of rain. The Lakota Sioux refer to the cottonwood as the “dreaming tree,” a place for visions. Perhaps Dixon now saw a new vision of the American West, a place populated by phantoms dying of nostalgia and bitterness from the changes, shivering and clattering among the leaves of old cottonwoods. ”
Donald Hagerty. Forward from “Mesas, Mountains & Man: The Western Vision of Maynard Dixon” Catalogue from the 1998 Maynard Dixon Exhibit at Medicine Man Gallery 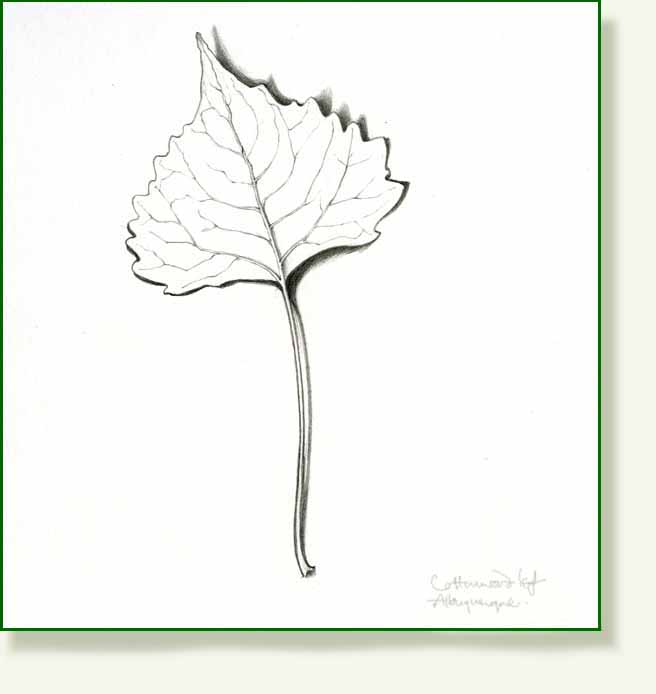