Yesterday I went to the gardens for a quick visit to look at the exhibition space again and for some more big leaf inspiration. I seemed to bump into everyone, all the gardeners and my friend John, a fellow habitual Leu Gardens wanderer. I think there are only two of us who have become partial fixtures. The gardens are looking rather shorn, clipped and tidied with much cutting back and pruning after the big freeze. The frost damage is everywhere, burnt tips of cacti , browned crisped leaves and leafless trees. It does look bare but I feel the garden is just holding its breath, regrouping and poised to burst into rampant growth again. The weather is warming up and there was definitely a feeling of spring.. even here in the land of perpetual green.

Being the relative newcomer, I am still fascinated by the wildlife and especially the snakes and alligators. I know for the native Floridians they are commonplace but I was delighted to see a young alligator down by the lake, perhaps only 4 ft long. They tell me the young ones of this size are still in danger of attack from hungry larger alligators, so I hope I see this one again. 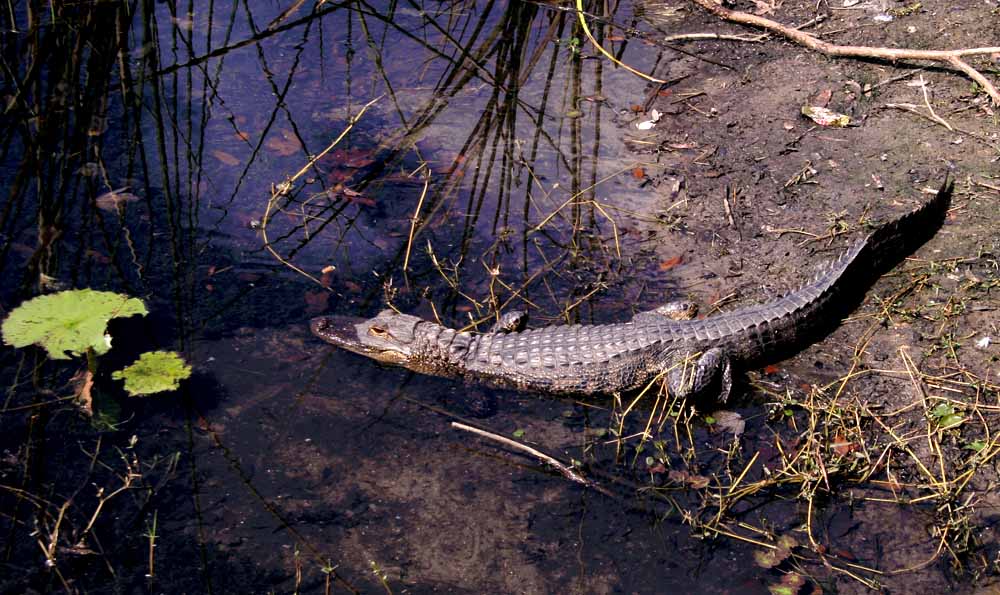 Pedro, always true to form, had found some new and strange things for me to draw. From the depths of a plastic bag and with a magician’s flourish, he delightedly produced these odd furry things that look like some sort of strange rabbit’s feet or a furry beak with 2 eyes. And when I say furry I really mean furry. The covering is not like plant material at all, it’s thick, soft and woolly and even slightly wavy, like a lambs coat. They are the most peculiar things, but are definitely plants or rather parts of plants.

So what are they? I didn’t have time to go and see which plant exactly, but I think they are some of the scales from one of the Dioon Cycads, next time I go I will find the plant to see if I can get a drawing or a photo. Here is a Dioon cone from cycadinternational.com. here 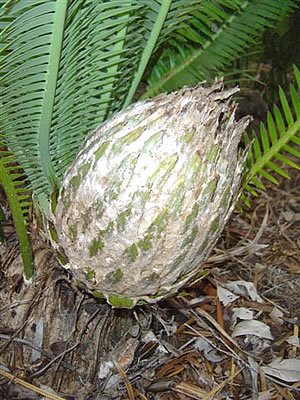 and the “scales” I drew, but now with their backs to you. 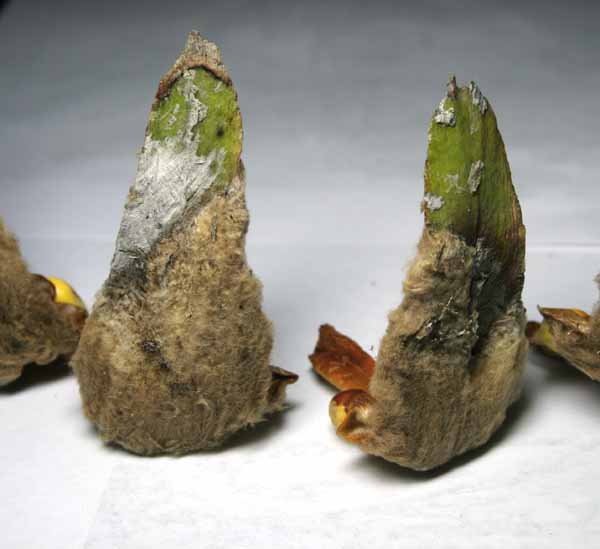 The “Dioon” name of these particular cycads is from the Greek, meaning “two egg”, because the seeds come in pairs as you can see below. I have written about the wonderful ancient cycads and their bizarre pollination before here. They are amongst my very favourite plants at the Gardens and I really haven’t given them as much attention as I should, mainly because of their size. I hope I can get a sketch of this one later this week…. kohlrabi permitting.
_____________________________________________________ 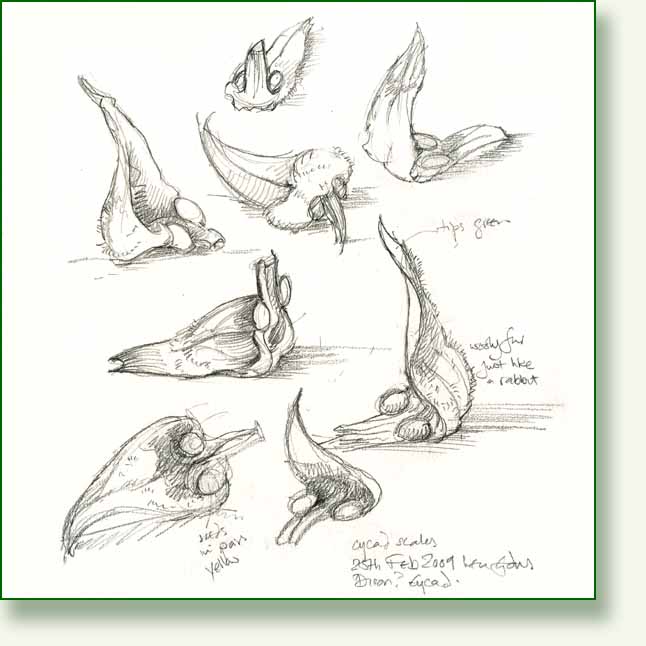 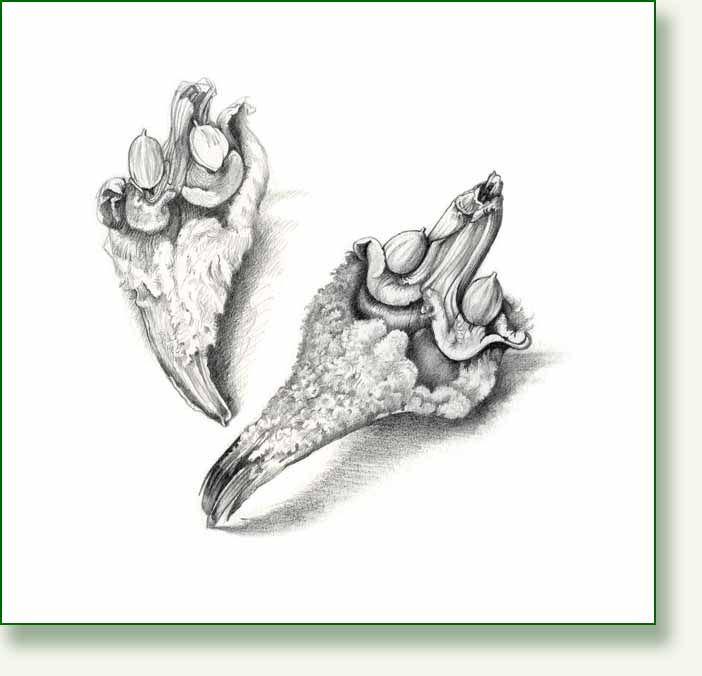 We went out cycling this morning and to my complete astonishment saw an otter basking on the shores of Lake Rowena near the Orlando Museum of Art. An otter, here in the middle of this big city, only yards from 6 lanes of traffic, unbelievable. It slipped into the lake and swam away too fast for me to photograph.
The otters here are river otters. This is one of many great photos taken by Jessie Dickson of the otters at Viera Wetlands here in Florida.. go and see more all together in one album page here. 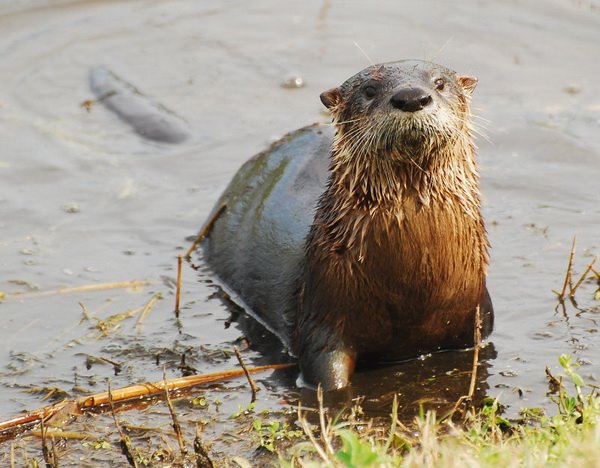 This adorable pup is from the Tampa Bay Aquarium where they breed and rescue river otters. more here 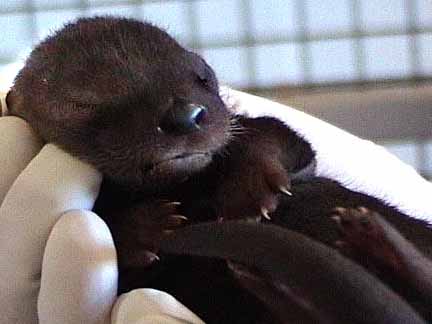 Even after a year here I am completely enchanted by the huge variety of wildlife I find in this very urban environment, helped enormously by Orlando’s many lakes, over 2000 in about a twenty mile radius. If I go to the lake here I will see ospreys, ducks, anhingas, moorhens, coots, various herons, terns, grackles, egrets big and small, and platoons of strutting ibis. We live next door to a dreary concrete Mall but the ospreys have a nest on one of the big floodlights in the Kmart car park. It is not advisable to park underneath this light unless you want your car covered with twigs, droppings or bits of rotting fish, tidy housekeepers they are not. 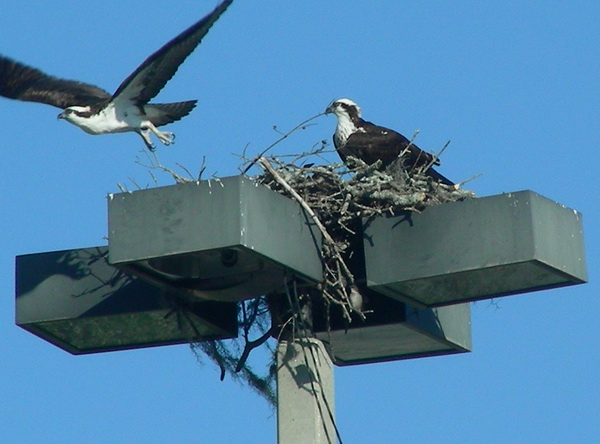 We have a chattering belted kingfisher which every night flies around the apartments. It’s big and very noisy. I see the alligators, turtles and snakes at Leu. Out in the suburbs, where we first stayed, there was a bobcat trotting along a forested scrubland trail at dusk, as well as huge sandhill cranes who barely move as you pass. There are the ever present circling turkey buzzards, hawks, big serious owls and the ponderous wood storks. There are colourful woodpeckers, we saw one of the big red crested pileated woodpeckers today, brilliant red cardinals and sweet little mocking birds. Frogs, toads and more. All this and I am not even looking for wildlife.
A few weeks ago we went to Myakka wildlife reserve and saw, as a well as a bald eagle reliving an osprey of its catch,and the obligatory alligators, the strange little Limpkin. Aramus guarauna. My less than perfect photo does at least show how well camouflaged it is. 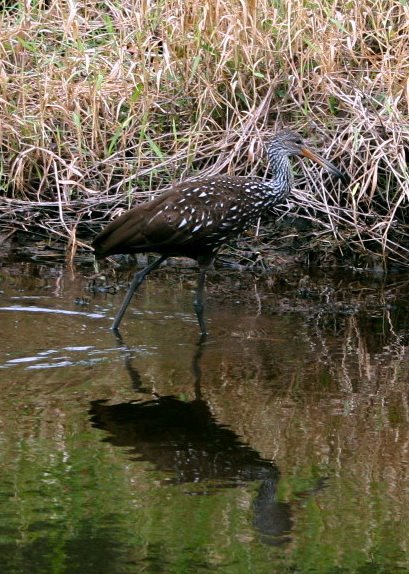 It is so called because of its awkward gait and is also known as the Crying bird because of its distinctive call, a piecing wild sounding scream or wail which it makes especially at night. The noise was so disturbing that the early Florida pioneers “mistook the call of the Limpkin for the haunting wails of tortured souls in the night time swamps”. It has also described as,”a hoarse rattling cry like the gasp of person being strangled, like “little boys lost in the swamps forever;” or ” an unearthly shriek” with the “quality of unutterable sadness.” Many tales and legends arose from this eerie sound and in parts of the Amazon they believe that a crescendo of limpkin calls foretells that rising river levels have reached their height.
Its eldritch shriek has also been immortalised in the soundtracks of old Tarzan movies and more recently in Harry Potter. Cornell’s Macaulay Library provided the voice of the Winged Hippogriff, read more here and listen to a great recording of its call made in Florida in 1956 here. I understand it is very annoying to have Limpkins nearby if you are a light sleeper.

Audubon’s Limpkin is wonderfully evocative…I still think he is the best by far. 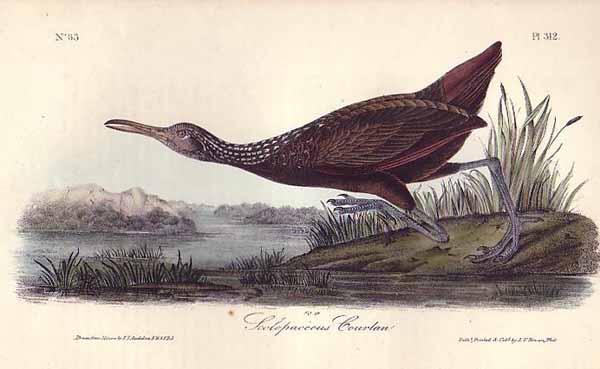 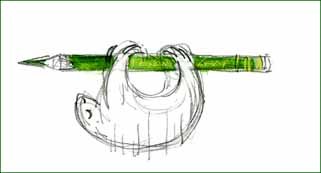 This is the Pencil & Leaf sloth of sloth, signifying a day off drawing.

The last day of February and it was a beautiful day so I went down to Leu Gardens. If only I could share the physical sense of being there, especially when I walked through the citrus garden. The overwhelming scent of orange blossom took me back to Spain and happy memories of driving through the acres of orange groves along the Guadalhorce Valley in spring. I saw many lovely flowers, trees and birds today, including lots of “firsts” for me in Florida. A comical red crested woodpecker was hammering its head enthusiastically into one of the tall palm trees, a pair of brilliant red cardinals darted in and out of the bushes and two stately woodstorks were fishing in the lake margins and then, most exciting of all, there was my first alligator!..I have to include my photo here. 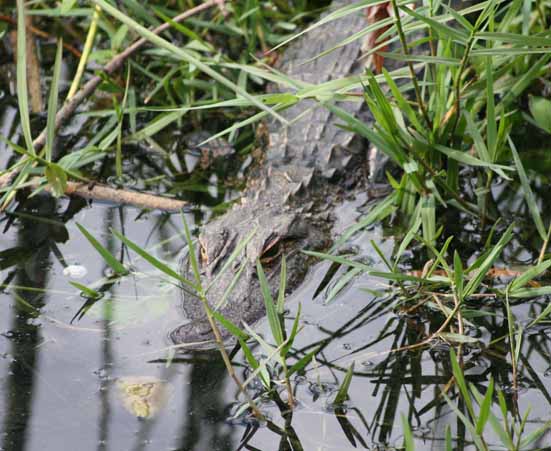 This was a small one basking in the sun with another larger one farther up the bank. It is wonderful to see them properly in the wild and not in some awful zoo doing tricks for tourists.

However back to the oxalis. There are about 800 different varieties of oxalis and this one is oxalis latifolia, or broad-leaved wood sorrel. This huge leaf was growing amongst some ornamental grasses in wooded shade by the entrance to Leu gardens. Its whole stem from leaf to root tip is 14 inches long, showing how far it had to grow to find the light. It is considered a weed here but is very pretty and they do in fact grow a beautiful dark purple variety in the gardens here.
On this trip I spoke to Pedro, one of the gardeners who drive around in golf buggies, about permission to take samples for drawing and all seems fine, I just have to ask. I am very pleased as my inspiration from the Mall borders is getting somewhat jaded. The only problem I have, is getting there on my bike. I will return to the hair raising subject of cycling in Orlando, city of cars, soon.
________________________________________ 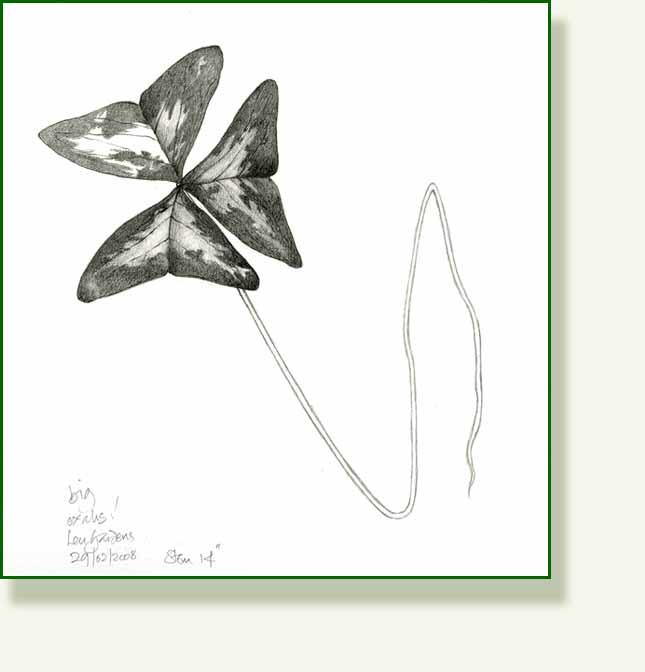