I have been doing some more general bee reading today, mostly about the fascinating little bees that use snail shells for their nests. I always like to read Fabre and I have mentioned him in the blog before.  If you had ever thought that wild bees might be boring or uninteresting…(how could you??)  just read the passage below.

I know it is a translation but it is still such lovely writing.
From the introduction to Jean Henri Fabre’s  Book of Insects, retold from Alexander Teixeira de Mattos’ translation of Fabre’s “Souvenirs Entomologiques,” 1921.
Fabre is describing his delight in getting a small piece of land where he can observe his insects uninterrupted…

“For forty years it was my dream to own a little bit of land, fenced in for the sake of privacy: ….And then, at last, my wish was fulfilled. I obtained a bit of land in the solitude of a little village. It was a harmas which is the name we give in this part of Provence to an untilled, pebbly expanse where hardly any plant but thyme can grow. It is too poor to be worth the trouble of ploughing, but the sheep pass there in spring, when it has chanced to rain and a little grass grows up.

My own particular harmas, however, had a small quantity of red earth mixed with the stones, and had been roughly cultivated. I was told that vines once grew here, and I was sorry, for the original vegetation had been driven out by the three-pronged fork. There was no thyme left, nor lavender, nor a single clump of the dwarf oak. As thyme and lavender might be useful to me as a hunting-ground for Bees and Wasps, I was obliged to plant them again. There were plenty of weeds : couch-grass, and prickly centauries, and the fierce Spanish oyster-plant, with its preading orange flowers and spikes strong as nails.

Above it towered the Illyrian cotton-thistle, whose straight and solitary stalk grows sometimes to the height of six feet and ends in large pink tufts. There were smaller thistles too, so well armed that the plant- collector can hardly tell where to grasp them, and spiky knap- weeds, and in among them, in long lines provided with hooks, the shoots of the blue dewberry creeping along the ground. If you had visited this prickly thicket with- out wearing high boots, you would have paid dearly for your rashness! See here is a Tailor-bee. She scrapes the cobwebby stalk of the yellow-flowered centaury, and gathers a ball of wadding which she carries off proudly with her mandibles or jaws. She will turn it, underground, into cotton satchels to hold the store of honey and the eggs.

And here are the Leaf-cutting Bees, carrying their black, white, or blood-red reaping brushes under their bodies. They will visit the neighbouring shrubs, and there cut from the leaves oval pieces in which to wrap their harvest. Here too are the black, velvet-clad Mason-bees, who work with cement and gravel. We could easily find specimens of their masonry on the stones in the harmas. Next comes a kind of Wild Bee who stacks her cells in the winding staircase of an empty snail-shell; and another who lodges her grubs in the pith of a dry bramble-stalk; and a third who uses the channel of a cut reed; and a fourth who lives rent-free in the vacant galleries of some Mason-bee. There are also Bees with horns, and Bees with brushes on their hind-legs, to be used for reaping.

On my doorway lives the White-banded Sphex: when I go indoors I must be careful not to tread upon her as she carries on her work of mining. Just within a closed window a kind of Mason-wasp has made her earth-built nest upon the freestone wall. To enter her home she uses a little hole left by accident in the shutters. On the mouldings of the Venetian blinds a few stray Mason- bees build their cells. The Common Wasp and the Solitary Wasp visit me at dinner. The object of their visit, apparently, is to see if my grapes are ripe. Such are my companions. My dear beasts, my friends of former days and other more recent acquaintances, are all here, hunting, and building, and feeding their families.”

A wonderful and affectionate introduction to our wild bees. I, too, am hopefully on the brink of getting a small garden which sounds very much like Fabre’s… not overgrown as such but with nothing much there.

I will hope to create as good a bee haven as his and I did notice a small vine growing on the fence, so I will also be looking forward to having the company of wasps at dinner.

Snails shell bees roughs I worked on the sketches a bit more today. They are Osmia bicolour male and female.. 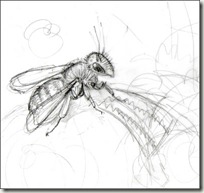 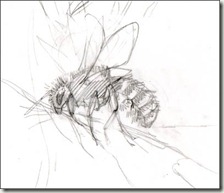 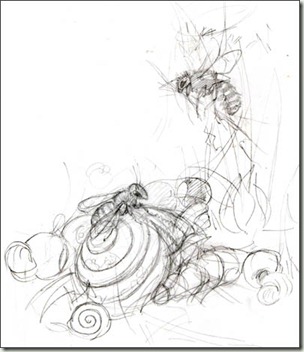 More about them in the next post.. I am just off to read a bit more of Fabre’s writing. You can find a great page which has links to his books on line here.
This book site has been complied by John Mark Ockerbloom, digital library planner and researcher at the University of Pennsylvania, who deserves a medal. We are so lucky to have resources like this!