The Road to New Orleans and a Chef with no Hands

We flew into Orlando on Tuesday and drove out again four days later.

Our travelling day sandwiched between the retail frenzies of Black Friday and Cyber Monday. A quiet “eye of the storm” day in the middle of the cyclone of 42 million people who were estimated to be swirling around the USA this Thanksgiving.

The directions to New Orleans couldn’t be much simpler. The 638 mile journey is detailed in just one page from Google Maps. You take the Florida Turnpike to Interstate 75, drive 107 miles and at junction 435 turn onto the mighty Interstate 10. Here Google maps merely says: “Go 478 MILES”. And that is just what you do. Go..go go…for 9 hours and some.

Interstate 10 is the magnificent 2,460 mile long road that straddles the south of the USA from Santa Monica to Jacksonville.
On the way to New Orleans you pass through the Florida Panhandle, Alabama and Mississippi. You cross the Suwanee River whose sign is printed with a couple of bars of its famous song.

You stop at the pleasant rest areas and you stop for coffees. You try to find cheap petrol, try to find something on the radio that isn’t Country and Western, try to count the number of Waffle House restaurants there are on the way and stop very quickly when the maths becomes complicated and of course you stop for a bite to eat here and there.

We have done this trip once before and as luck would have it, found our way back to Sally’s Restaurant for lunch. Sally’s is just off the Ponce de Leon junction and although its very pink décor – both inside and out – is somewhat faded you will find a warm and smiling welcome and some wholesome food.

It’s a local place where locals come to eat and after the dreary conformity of the chain restaurants which line the main road, Sally’s is quite a change! 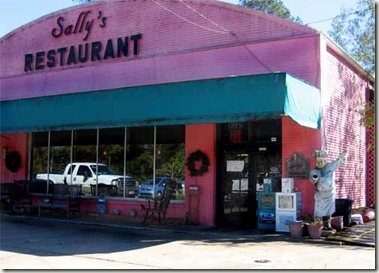 One thing that might make you hesitate though is the frightening statue of the leering chef outside whose welcoming outstretched arms are horribly handless. 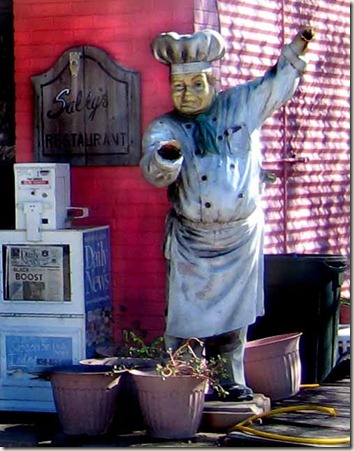 The Handless Chef at Sally’s

In this quiet wooded area it is easy to let your mind wonder as to the fate of those hands. But just ignore him and the abrupt sign on the door which says “we no longer accept checks of any kind unless you are personally known to us.” and go and enjoy some Southern cooking.

There is an astonishing paper frieze around the top of the room of a French Boulangerie and an extraordinary clock and if the chef outside is handless the cook inside certainly is not and you can see Sally at work in the kitchen and the waitress was just lovely.

Then it’s on and on. The broad flat road is flanked by ever present dull green pines which march along the whole route regardless of state lines, relieved now by a sprinkling of copper tinged autumnal trees. There are swampy areas whose black waters contrast starkly with the white skeletons of drowned trees and then there are the bright steely city skylines of Mobile and Biloxi.

All the way the medians and the verges are wide and immaculately mown, presumably at night by elves who live in the adjacent forests as, on none of the three trips, have we ever seen any mowing activity at all.

In the v-shaped medians occasional wooded strips act as cover for the stealth police cars and as you near the towns, the gleaming silvery domes of water towers rise, UFO like, above the tree line on thin spindly legs.

On the way I saw little rolling pastures with round straw bales which could have been in England and I saw the same long watering gantries that span the fertile fields of East Anglia. I saw some pretty perfectly spotted appaloosa horses grazing in a green green field. I saw beautiful longhorned cattle.
We thought it might be nice to stop at Niceville one day but decided to give the Gun and Knife show at Mobile a miss this time.There are many many billboards to entertain you on the way, some that make we two liberally minded, non religious Brits shudder but, as one sign simply said, “ Billboards Are Groovy”.

On the road we leapfrogged the slower RVs, the Winnebagos, a few cigar shaped perfectly preserved Airstreams, and the magnificent gleaming rigs that are American trucks.

“Without trucks America stops” read the stickers on the back.

We stopped to rest only to catch up with them again further along the road. The “Florida Beauty Flora” truck from Miami was with us all the way.

Huge people in huge pickups pulled huge trailers and a family car towed a canoe full of bicycles, topped with the cat basket… minus cat, I hasten to add.

The sun travelled with us on our left all the way, casting long black strobe like shadows across the road until we crossed the long low concrete bridge which skimmed the now placid Lake Pontchartrain and headed into New Orleans.
There it crossed our path and from our right blazed onto the gleaming Superbowl turning it into a beacon of dazzling fiery-gold.

We arrived in New Orleans at 5 pm, exactly on time… it was a fine trip.