I mentioned “Project Lavender” a couple of posts ago, which is a project to find out, amongst other things, which lavender is the best for bees. Downderry Nursery have kindly sent me the names of the varieties which are being tested. Here they are:

Don’t get too excited though because they won’t know which one is the favourite for 3 years.. but you could always just get one of each of course and do your own experiment. And big thankyous to all the people who send me bee news as I have been very cut off from things recently.

Ben Bulow sent me the link to the BBC´s excellent piece:

Nature’s sting: The real cost of damaging Planet Earth by Richard Anderson Business reporter, BBC News It’s interesting that the article falls under the “business” rather than the “ecology” category and is about “just how expensive the degradation of nature really is.” For example, the staggering cost to the world “of replacing insect pollination is around $190bn every year”

You don’t have to be an environmentalist to care about protecting the Earth’s wildlife. Just ask a Chinese fruit farmer who now has to pay people to pollinate apple trees because there are no longer enough bees to do the job for free.

It’s a sobering article, highlighting some recent reports which show how our disregard for the natural order of things can cost us very dearly. The decline of bees and other insect pollinators is just one small part of the whole mess we are finding ourselves in.
Recently I have been reading more about the Insect Pollinators Initiative that was announced in April 2009. The projects sound interesting and much needed and I am glad and 10 million pounds is a fair bit of money but, a year on, it seems it is still being “announced”. I am just wondering why they don’t get on and do something.

However, I am reassured by the Living With Environmental Change newsletter who say this about the project

The causes of pollinator declines are likely to be multifactorial, involving complex interactions between pollinators, their pests and pathogens, and the environment. Multidisciplinary and systems-based approaches will be important in elucidating them. In particular, the funders are keen to bring to bear on these issues – alongside the expertise of the existing pollinator research community – relevant new skills such as state-of-the-art and high-throughput “post-genomic” technologies, and the latest techniques in epidemiological and ecological modelling.

Hmm.. that’s a fine and dandy bit of writing but I am still not sure what they will be doing and anyway it will be five years before there is any conclusive evidence.

I hope they all keep daily blogs and account sheets, so that we can see what they are up to. Perhaps they will ? Perhaps we can be given some info along the way so we, the public, can do something about it, or perhaps we have to wait for the “fully funded presentation” in five years time… sigh… I know research takes time but by their own admission the decline needs “urgent” attention.

However lots of non scientists are getting on with things right now and this year has been wonderful for “bee awareness” and I hope it will be carried over into next year and the year after that.

I shall be doing what I can with my “Buzz” exhibition and some talks and generally enthusing ( might that be “boring”?) people about bees.
I do think I need to start including some other pollinators in the blog too.

And we can all plant a few more wildflowers and of course, some more lavender…Sorry my faithful blog readers, I am preaching to the converted I know. Here are a couple of studies of a little lavender sprig I found yesterday.

Yes, despite the biting north east wind which has been ripping leaves off the trees and making a sea front walk just sheer unadulterated misery, there are still a few lavender flowers to be seen. Tough little plant this! 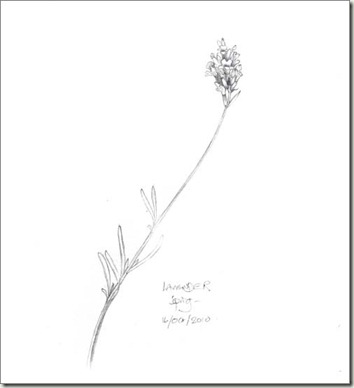 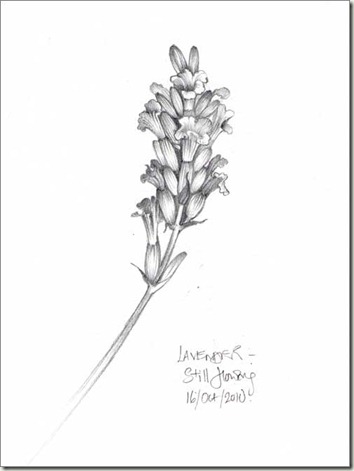