In my set of very bad and blurred photos from our UK garden last year is one of a black and white bee.

I am still not sure exactly what it is.  It could be a cuckoo bumble bee or it could be one of these, the beautiful and glamorous Andrena cineraria, so very chic in black and white, a real little film star of a bee.

As I was painting her of I was thinking of Audrey Hepburn in her black and white Ascot dress and the beautiful paintings of Tissot. She (the bee) has two ruffs of silky white hair on her thorax, like a tightly fitting, fur trimmed bolero. (This is what hours of solitary confinement at the drawing board does for you..!)

Andrena cineraria..(Latin  cinis, ashes) is one of the huge Andrena genus of mining bees. The Discover Life site lists hundreds, and it seems there are over 1,300 species worldwide.

While researching I came across this lovely photo from Stuart Dunlop’s Donegal Wildlife Blog. This is from his entry “Sun!” Monday 5 May 2008:

“This is another of the mining bees from my garden: the beautiful Andrena cineraria. 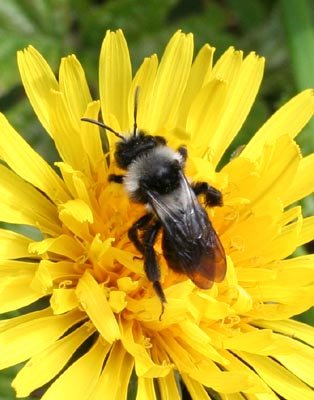 Photo Stuart Dunlop.
That shot required knowledge of the behaviour of the bee: they land and very quickly bury their heads in the florets, so all you get is an abdomen shot. But they tend to do a slow 360 degree turn before they fly off. So if you watch where they land and wait for them to complete their rotation you can get the shot as they prepare to take off.”

I am not an insect photographer and so admire a good photograph. Good equipment has something to do with it of course, but understanding your subject, watching and learning and being patient help too.

Here is another photograph from Stuart’s other pre blog website, “Hedgerow18” , which is a superb photographic resource with many more photos and observations of Irish wild life. 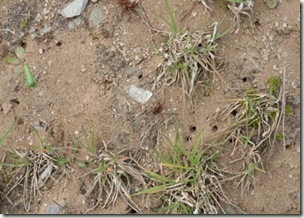 It is a nest site which the Andrena cineraria is sharing with Halictus rubicundus. These sites are called aggregations or as Christopher O’Toole and Anthony Raw from their excellent book “Bees of the World” would call them “bee villages” because although there are many together, they are all separate nests.
Some ground nesting sites can be huge. They mention one in Russia that was 10m to 150m wide and extended for 7 Km. as they say, “a huge metropolis rather than village”.

“A potential problem for a bee which nests in a dense village is finding its own nest amongst a plethora of entrance holes. The returning forager will find her way back to the general area of the village by means of her mental map of memorised distant and near landmarks…..Having got as far as the village  our homeward bound female uses close landmarks to get to the immediate area of her nest entrance. A female often inspects several nest holes with her antennae before deciding which is her own ..

Scent it seems, then plays a role in locating her actual nest. Below the surface, the nest will look something like this, a central  tunnel with chambers radiating out. It’s a lot of work for a small bee. 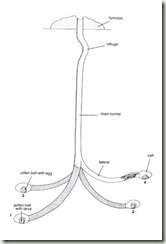 Nest typical of the Andrena mining bees from “Bees of the World” by Christopher O’Toole and Anthony Raw.

I have also read that Andrena bees like to live in “green roofs”. Green roofs are such a nice concept and such a good way of extending a small garden. There is a lot of information about green roofs at LivingRoofs.org.

This is the female bee who is chunkier than the male. They, along with many other bees, love the early flowers of Hawthorn which is an important supplier of both pollen and nectar. One of my very favourite times in Lincolnshire is early summer when the lanes are white with May blossom, Cow Parsley and the candles of the magnificent Horse Chestnut trees.  There was talk of some problems for Horse Chestnuts in the UK. I hope they have a solution. 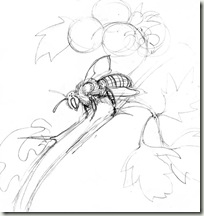 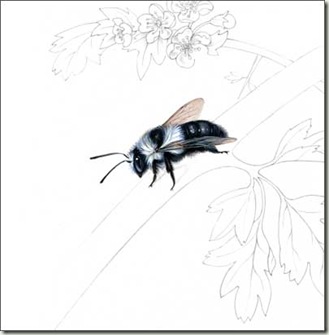