I had discovered the genus of Colletes bees when I was researching for Deborah’s Bees back in the autumn. Known in the USA as Plasterer or Cellophane bees, these little bees are very pretty.

There are several species that can be found in the UK but it seems to me they are quite difficult to tell apart, perhaps more easily identified by the plants they are found foraging on.
So it is with this one, the Ivy Bee, Colletes hederae. They just love ivy flowers. In the autumn when many other flowering plants have finished ivy comes into its own, and if you live in the south of the UK and have some ivy you may well be able to see these bees.

Although relatively new to the UK (first recorded in 2001, see BWARS) they are beginning to extend their activities.  Here is one of many lovely photos by Jane Adams from her blog post “Hunt for a Special Bee” written in September last year, from her excellent wildlife blog “Urban Extension.” 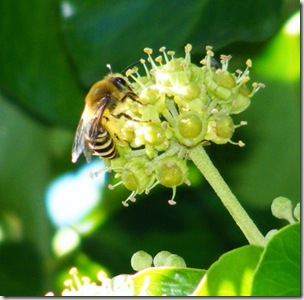 “There was one particular Ordnance Survey grid square where they hadn’t been found. Grid SU. Near to Wimborne and near to where I live! So I went on a serious “Bee Hunt” while doing my shopping (well you have to do more than one thing at once don’t you?).”  Do read more…here

Jane eventually tracks down said bee at the back of a toyshop.. Well.. where else?  You will find another earlier post about the Ivy Bee on her blog here and lots of good info and links to other sites etc.

You will have to wait a bit to see one however as they are out and about from mid September until early November just to catch the ivy flowering season.

A Quick Word about Ivy Flowers

I must admit I had not given ivy flowers much thought  before. In the garden at home most ivy activity is to do with chopping back in some attempt to stop it taking over both the house and the garden. But while I was researching all this I came across some super photos from botanist Phil Gates’ excellent blog “Cabinet of Curiosities”. This is from his aptly named post “Drinking in the last Chance Saloon” published in October last year. Talking about ivy he says;

“To appreciate why its flowers are so attractive to insects, you need to take a really close look on a mild humid morning, when the disc at the centre of the flower is absolutely swimming in secreted nectar (see lower two photos) and newly open stamens are still full of fresh yellow pollen. It’s difficult to underestimate the value of this plant as an energy source for insects that hibernate, bearing in mind its wide distribution, the vast number of flowers produced on just a single plant and their long flowering period.” 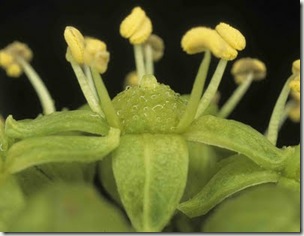 Just one of his photos from the post showing quite clearly the drops of nectar on the flower disc. Read more here.. There are some wonderful things on Phil’s North East UK based blog and his microphotography is stunning.

Lining the nest with Cellophane.

I was very curious about the USA name, the “Cellophane” bee. Both this name and the “Plasterer” bee name come from the ability of the females to line .. or “plaster” the walls of their burrows with a waterproof film which resembles cellophane. This curious substance is secreted from a gland in the head.

It is important for this particular bee because the provisions that she leaves for the developing larvae is in a more liquid form than the usual bee bread, so this wonderful natural waterproofing keeps the cell walls intact and also protects both food and larva from damp and mould. There is so much more to say about these fascinating bees. I will hopefully get back to them when I paint the Hylaeus, the white-faced bee which is from the same Colletidae family.

Somehow I have managed to get a day behind my schedule. I have spent far too long reading and researching this last two days. I made a couple of quick sketches, and dithered for too long about the legs and wing position. I did say I was on a slow week this week but I have a May deadline and I think I need to speed up some of the decision making!!

One interesting thing about this bee is that what appear to be white stripes are in fact a fringe of very closely packed white hairs at the edge of each body segment. The size of my drawing is much to small to show that really, but it helps to bear that in mind when painting.
I have given this bee some pollen which they collect in the “scopae” of their hind legs..which, if you are interested, is from the  Latin, used only in plural “scopae” meaning  twigs or brush. 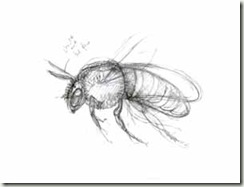 These are quite hairy little bees and I try hard to get the hair (pile) quality right. The hair on the upper thorax is quite upright and tufty whereas the hair on the lower abdomen is silkier.. sometimes that is tricky. 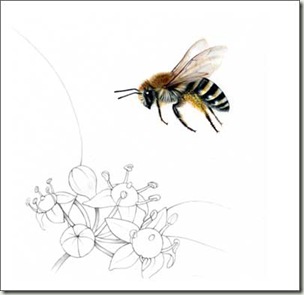