Leaf of the Day: It had to be Mark Catesby

I hummed and haa -ed for a few more hours today..who to write about? I inevitably found other artists and spent more hours looking and reading but eventually decided on Mark Catesby.
Typically I love the research and get terribly and wonderfully side tracked but hate the writing up, the pulling it all together, into a coherent whole. The floor around my desk is knee deep in a big muddle of paper. My reluctance to get on with it is not helped either by my inability to type. Oh if only I had listened to my mother extolling the virtues of a secretarial training, scornfully rejected of course by her artschool intent daughter. Writing this blog is often an excruciatingly slow task which is my just punishment I suppose. So my mini opus is not yet finished…tomorrow I hope

But why Catesby?
It’s sometimes hard to describe exactly what it is in someone’s work that appeals to you but with Catesby it was a mixture of reading about him.. you instantly like this happy, inquisitive and dedicated man, looking at what he achieved and of course the quality of his work. I can respond to his discoveries so directly because in a very small way my time here mirrors his. He came from England to North Carolina, not a million miles from here. I, the newcomer even from roughly the same area in England as Catesby, also stand open mouthed at the birds, the trees and sheer variety of plant life, colour and form. I delight in discovering all the various uses and customs of these plants and trees. I am in awe and some fear of the snake that slithers into the twisted banyan roots. I marvel at the colours of the beautiful big butterflies and size of the huge magnolias, I cannot believe the noise of the frogs. I see it all as a whole experience.

Catesby’s intent I am sure was to try to convey to his eager audience, though his prints and texts, the experience of being here, not with a single specimen study but by combining things together on one page, just as he saw them in nature, interacting with each other and part of something bigger. He has been, and still is, criticised by the joyless ones who misunderstand completely his desire to record just what he saw and who try to judge his work by purely scientific standards.
One bone of contention is, not only his mixing of sometime quite unrelated plants and animals but the discrepancies between their sizes. One extreme example is the wonderful bison scratching against an acacia stump out of which sprouts an enormous flowering branch. So obviously out of proportion that some critics said he had “failed” to make a proper image. 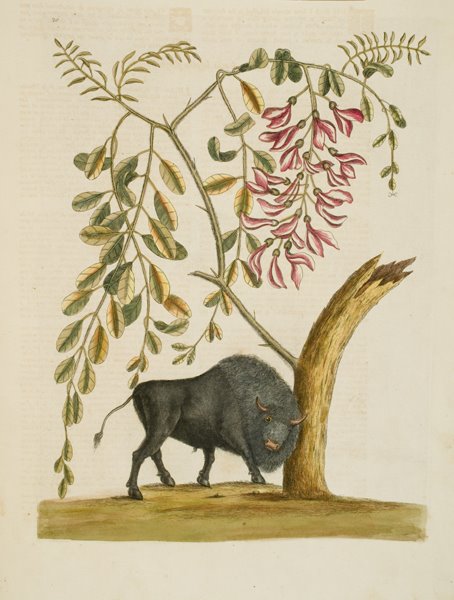 There are some fancy theories about symbolism and iconography etc in his use of disproportionate sizes and combinations of subjects, but, if you read his comments, he had seen the bison and the acacia in the same particular place and wanted to show them together. He observed of the trees,
” I never saw seen any of these trees but at one place near the Appalachian mountains where the buffellos had left their dung and some of the trees had their branches pulled down, whereby I conjectured they had been browsing on the leaves.”

His dilemma then would be size, which would be the size of the printed page (i.e. folio, approx 14 x 20 inches), so in order to show both the bison and the acacia in some detail, the flowers have to be bigger. Here the image makes the best possible use of the space on the page and makes a pleasing design too, expressing something of the “buffello’s” character, which he calls an “aweful creature” and the tree. It seems quite logical to me and it should not be forgotten that the prints were to be shown in a book opposite text which would in turn explain more about the images. 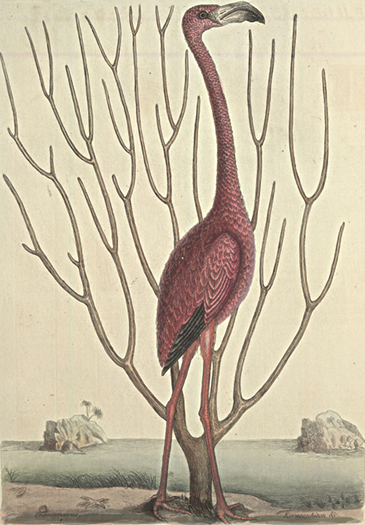 Here again there is a huge seaweed which will grow to only 2 ft high in reality. It sits behind the flamingo who would really be a full 5ft high. Audubon was also to have similar problems with flamingos which accounts here for the strange angle of the neck. 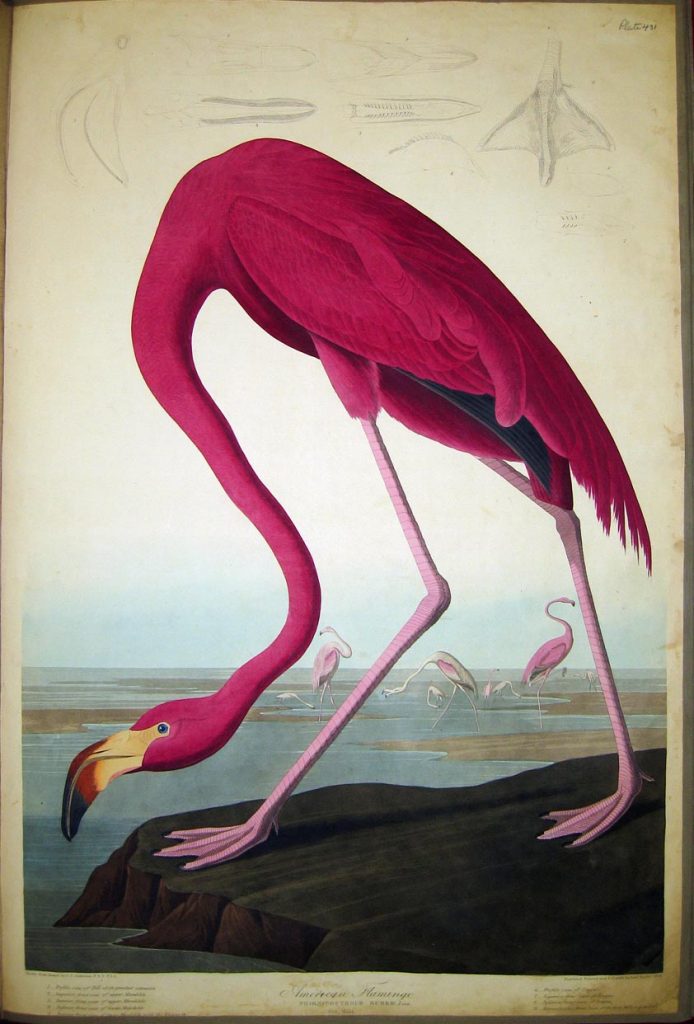 He distorted the natural poses of these long necked birds to get them to fit the page format but also to be able to show the detail of the body and featheres too.. Audubon came a good 100 years after Catesby and was very influenced by his work especially by the inclusion of naturalistic habitat details, for which he too was criticised… the joyless ones are everywhere..

I will make one more post about Catesby tomorrow. I really think he is worth it, right now I have much more essay to do.