Leaf of the Day: Poncirus, the Contorted Trifoliate Orange

The weather is dreadful. I am getting cabin fever, quite literally, as the amount of water swirling around outside might just as well be wind torn waves. We are lucky as our apartment is not on ground level, others are not and there has been some extensive flooding. Here in Florida not only will there be muck and debris in the flood waters but also the hazards of occasional snakes and alligators who are no doubt happy to have some unrestricted homes and highways to explore. I also heard there are fish on the runway at a local airport somewhere and we are being warned about the horrors of mould. I feel for the gardeners. I know what it is like to see favourite plants flattened or delicate blooms ripped into tatters.
I hope Fay will be soon be gone. …meanwhile there are still things in the fridge for me to draw.

This strange, spiky twisted thing is the contorted orange I found a few days ago down at Leu. To give it its full name, the contorted Trifoliate Orange or Japanese Bitter Orange, Poncirus trifoliata. It is an ancient and close relative of the citrus, so much so, that it is used by commercial growers as a root stock for improving hardiness and resistance to disease. It is a tough plant, well protected with these vicious spines, and it does produce oranges. At the moment they hard little green balls but by all accounts, even when ripe they are only useful to make a tart juice as they contain one of the bitter oils Ponciridin. The one I have drawn from Leu is a variety called Flying Dragon, Poncirus trifoliata v. monstera which can be miniaturized into a decoratively sinuous if rather combative bonsai. Here is a lovely photo of the Flying Dragon from the Home Citrus Growers site in the UK. here . It has some very good information about citrus growing .. a very nice site. 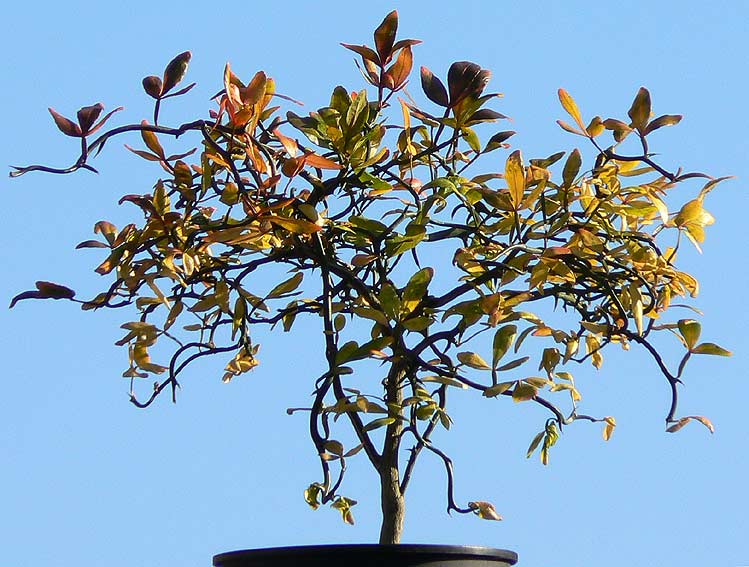 The whole subject of the citrus fruits is fascinating and wide ranging. The family seems to have originated in the sub tropical areas of the Asian countries was cultivated there, and later in the Mediterranean, for more than 4000 years. We value them for their beauty, fragrance, flavor and medicinal properties, so much so, that their spread across the world followed in the footsteps of civilization…when man explored and colonised the citrus went too.

The family of citrus fruits probably originated from just 3 or 4 species, the Pommelo, Citrus maxima, the Citrus, medica citron, and the Mandarin, Citrus reticulata .
The breeding and cross breeding over the centuries have given us a huge variety of species. For example, the common orange, Citrus sinensis and the sour orange, Citrus aurantium are considered hybrids of the pommelo with some mandarin mixed in. Limes, Citrus aurantifolia and Lemons, citrus limon, originated through the hybridization of citron with a primitive Papeda (a wild Asian species). Kumqauts (Fortunella spp) are derived from the mandarin and the Grapefruit ( citrus paradisi) is a pommelo hybrid. and there are other mixes, tangleos, citrines etc etc

The poncirus was developing alongside the other citrus fruits from ancient times, this little thorny plant being easily identified by its trifoliate leaves. All types of citrus were well known and appreciated in China from as far back as 1027 BC where they were mentioned in the Book of Odes from the Chou dynasty. The poncirus was described by the poet Sung Yu about 200 BC as “ a favourite tree of birds to build their nests”
And it is not surprising that these fragrant and beautiful trees inspired poetry and mythology and some would also say that oranges were the ‘golden apples’ stolen by Heracles from the garden of the Hesperides.
Living, as we once did, in Andalucía, experiencing miles of fragrant orange groves and seeing the old Moorish settlements and their gardens, you realise the appeal of oranges, they are both beautiful and useful.

A lovely Persian manuscript showing a garden.. and lady with tempting orange. 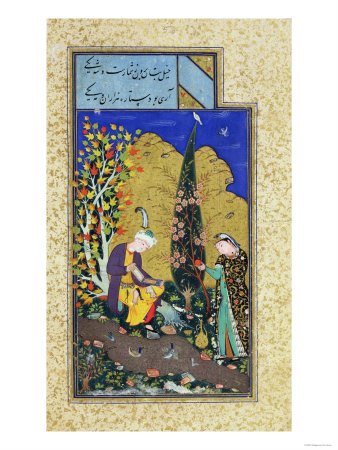 An eleventh century Arab poet writing from the then Muslim Sicily is justifiably lyrical.
“The oranges of the island are like flames shining between emerald branches and the lemon reflects the pallor of a lover who has spent the night in tears for the pain of separation.”

But today this particular orange has some bad press as being a noxious, troublesome and armour plated weed whose thorns can piece the thickest of tyres and is seemingly impossible to kill.
Here is my photo showing its twisting, interesting but very spiky branch. 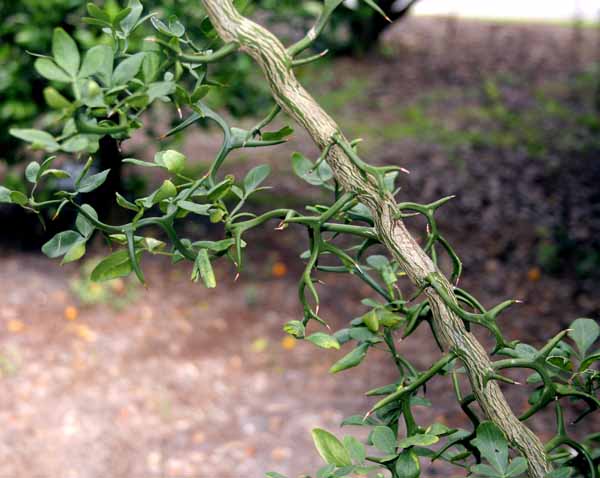 It multiplies rapidly too as the seeds are enthusiastically spread by small animals who have appreciated the fallen fruit. Alternatively it is liked for it’s a shape, its twisting and pretty branches and even for making juice and herbal concoctions. One contributor to a gardening forum, neatly echoing Suh Yung from all that time ago reaffirms that “The birds love to nest amid the thorns where they are protected from most predators”, surely one good enough reason to have just that one little tree? 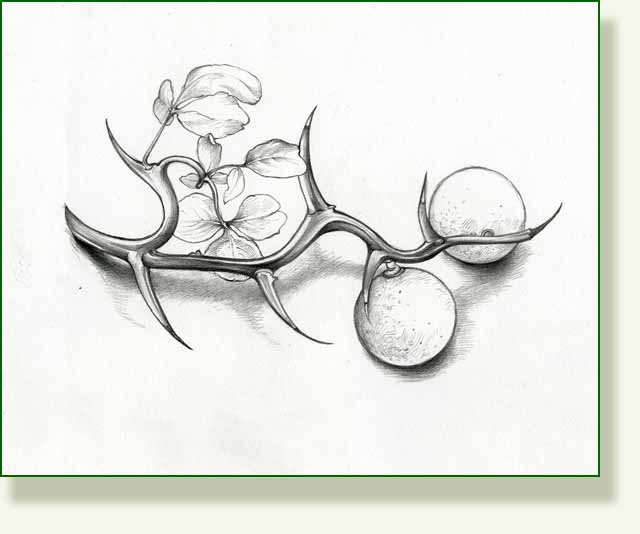