You would hardly think this was a bee would you?

And no, regarding the date, it’s not a joke! Although if I had had time, a fantasy new bee species would have been excellent. This is the little White Faced bee from the Hylaeus family, Hylaeus hyalinatus and at only around 6 mm it must be one of the smallest bees found in Britain and more wasp like than bee like.
There are several species found in the UK. They are all very similar and tricky to tell apart individually. For information on identification go to BWARS.

This particular one is a male and has some white hairs on the face, which you can’t see on my low res image.
Sometimes they are called masked bees, or yellow faced bees,  sometimes they have creamier yellow markings.

They are almost hairless and, unlike most other bees do not have any external pollen carrying equipment, but store the collected pollen in their crop. You are most likely to see them on umbellifers and the curious Reseda luteola plant, or “weld” which is interesting on it’s own account.
You will have seen it growing on wasteland, a rather straggly nondescript plant. However it is one of the ancient dye plants, which yields a beautiful yellow dye, and is commonly known as Dyer’s Rocket.
The photo below is from John Crellin’s excellent and extensive site Floralimages.co.uk on UK wild plants and fungi. 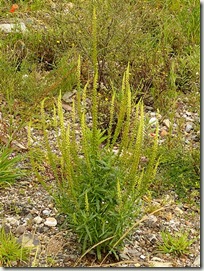 And its flowers reward a closer look too. 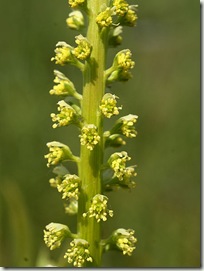 Photo by Hans Hillewaert  from Wiki

As with the Lasioglossum I painted a couple of days ago,  I am struck by what a different world they inhabit. Perched precariously on top of swaying stamens peering over the tops of petals or looking down from the dizzying heights of a trembling leaf.

Initially I had designated the centre of a buttercup for the drawing, with this smart little bee clambering over the stamens, but in the end, opted for placing him right at the top of one umbel of the flat topped umbel cluster of Common Hogweed (Heracleum nsphondylium. 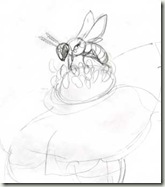 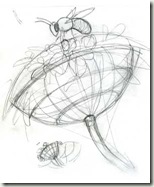 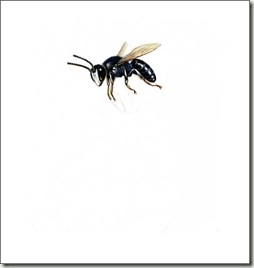 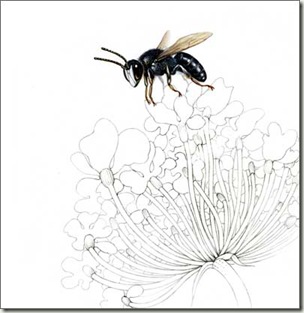