It may have just been a cauliflower but what a beautiful big cauliflower it was, growing in the Vegetable Plot at Leu Gardens. It was enormous and would have fed a family of ten with a hearty cauliflower cheese. Mark Twain apparently said that the cauliflower was “cabbage with a college education”.
I had sketched it a couple of weeks ago, meaning to ask for a leaf to make a study of, but when I returned it was gone. Carpe diem I did not..will I never learn? 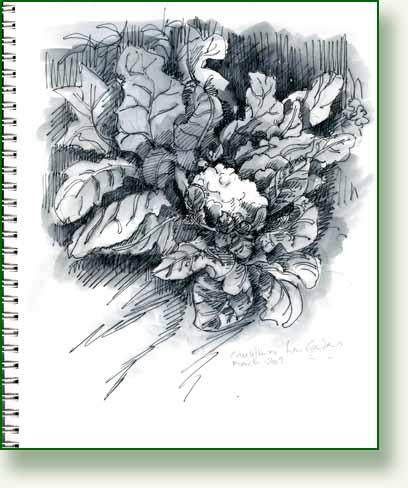 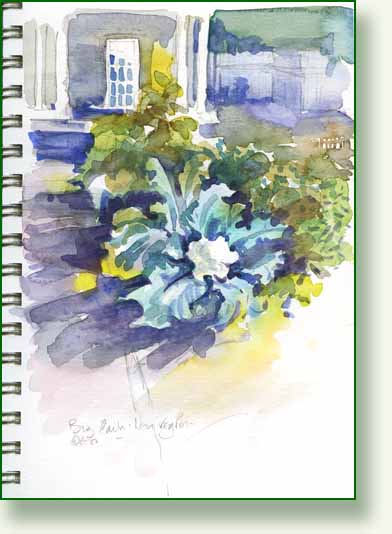 I really like cauliflower..But I have never tried to grow one. I love to see the pristine white florets tightly wrapped in their protective blue green leaves. What a very handsome vegetable they are. Bartolomeo Bimbi, favourite botanical painter to the Medici’s thought so too. 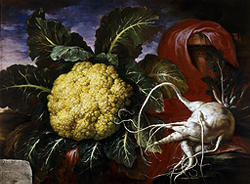 Bartolomeo Bimbi (1648-1729)
Bimbi, a Florentine artist with little formal training, painted still lifes of remarkable scientific accuracy. He specialized in “portraits from nature,” that is, the portrayal not of persons but of flowers, plants, and animals. His canvases decorated the walls of many aristocratic villas. These large-scale scenes of monstrous and odd specimens of flowers, vegetables, and fruits, which were grown in gardens amid fierce competition for the largest or most unusual hybrid, are complete with inscriptions listing the name of each specimen and when and where it was gathered. Notwithstanding this scientific approach, Bimbi’s subjects are arranged in picturesque compositions against landscape backgrounds, piled high on costly carpets and drapery, or placed among antique statuary. His patron, Cosimo III (1642-1723), was a gloomy and eccentric ruler, but he had a decided interest in botany, perhaps spurred by his rigid vegetarian diet, and the arts flourished under his reign. Also fond of exotic animals, he constructed a large menagerie in the Boboli garden behind Palazzo Pitti in Florence.

From the 2002 exhibition catalogue, “The Flowering of Florence : Botanical Art for the Medici”. National Gallery of Art, Washington here

It’s good to learn that the competitive veg growing spirit was alive and well, even in those days. They would, I imagine, have been envious of these. 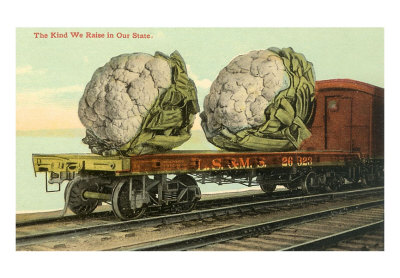 from All Posters here.. I am not sure which State though…

The cauliflower was bred from one of the broccolis, one which was grown for its heads of flowers rather than its leaves. Gradually the “flowers” became bigger and whiter. Originally known as Cole Florie (cabbage flower) it was introduced into England at the same time as broccoli by the Italians and the French, and by the 1600s was widely available. It was also known as Cyprus Coleworts from where it also seems to have made its way to Britain.

Gerard mentioned it in his Herbal in 1597

“Cole flore, or after some Colieflore, hath many large leaves sleightly indented about the edges, of a whiteish greene colour, narrower and sharper pointed than Cabbage; in the middlest of which riseth up a great white head of hard floures closely thrust together, with a root full of stringes, in other parts like to the coleworts.”
From the completely fascinating “Glossary of Medieval and Renaissance Culinary Terms” here complied by thousandeggs.com .. go there to spend many happy hours browsing.

And for those who want to brush up on their maths, the growth pattern of the florets (curds) of a cauliflower, as with many other natural forms, illustrates the elegant Fibonacci numbers, and its fractal dimension is predicted at about 2.88… 🙂 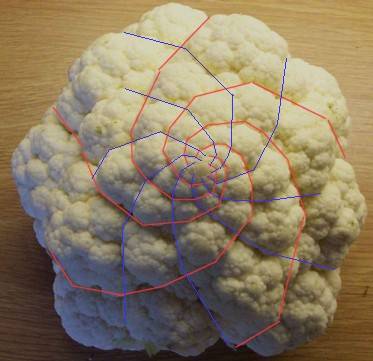 Go here to the aptly named Dr Ron Knott’s excellent Fibonacci and Golden Section in Nature pages with lots of info and things to do ..

Today I made a couple of very unmathematical studies from my sketches and a photograph, but this beautiful cauliflower really deserves a much more careful painting but when I have more time. 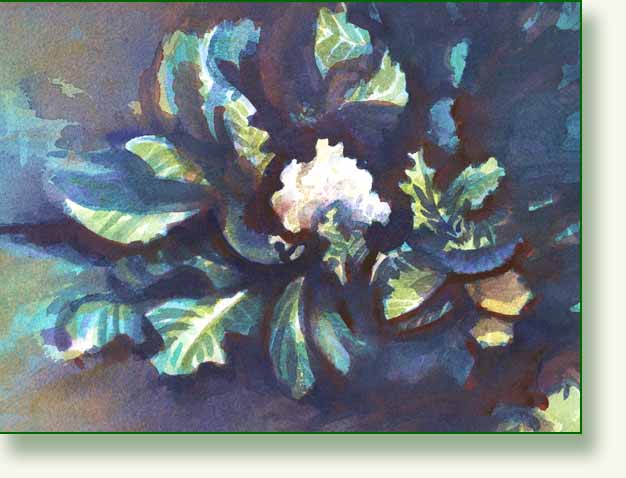 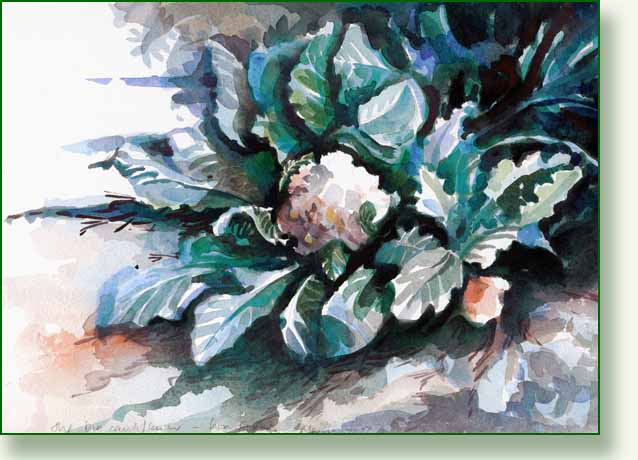 I love vegetable gardens, probably more than flower gardens. I like the neat rows of things which start off well ordered and then become disordered and unruly…just like life really. I like the different shapes of the leaves of new seedlings and the various stages of growth. I like big terracotta forcing pots and big leafy veg, tendrils twining up supports, white labels and twiggy pea sticks. I like espaliers and cloches, earthed up potatoes, asparagus ridges, feathery carrot tops and sprawling cucumbers and all the paraphernalia which goes along with the effort to produce something edible. Sometimes, I know, the rewards are small but the doing of it has been a joy.

The little vegetable garden at Leu Gardens changes frequently with the seasons. Sometimes it is neat and all new and sometimes overblown and gone to seed. There have been some wonderful new-to-me things such as the beautiful red okra which I have yet to get around to drawing and the odd Jicama, Indian Corn, Black Eyed Peas and of course some old favourites.
There is a small “tool shed” with a rather nice grasshopper wind vane, a veranda and a rocking chair, where you can sit and watch things grow. I made a couple of sketches the other day. 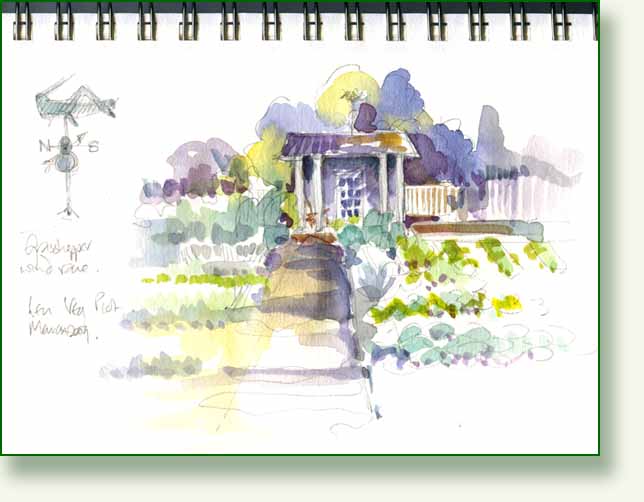 There is not too much there at the moment so I did have to add a few extra leaves here and there to the watercolour sketch, but the row of onions half in and half out of the sun caught my eye. 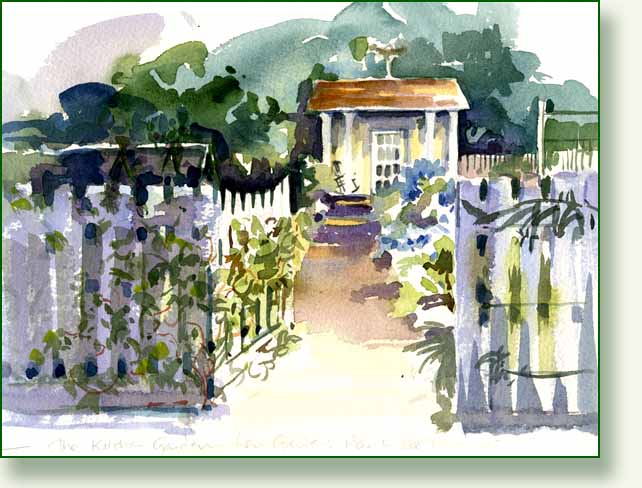 While I am busy cutting mounts (mats) and framing, and culling and re-writing blog posts.. sigh .. here are some very famous veg people, and another tribute to Archimboldo. Thank you so much Claire from Exterior Visions for the tip re: the excellent and memorable Australian ad campaign “2 & 5” which promotes eating more fruit and veg. Go to their website here for some really great visual treats.

You can transform yourself from poor grey pill man to a colourful veg man. 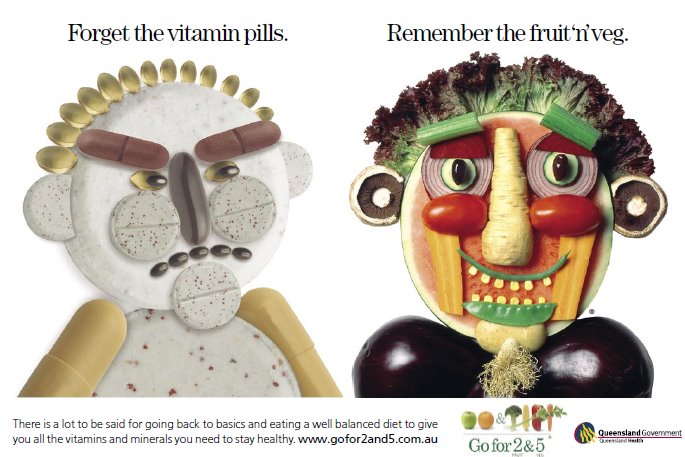 The campaign has a stellar cast… Hosted by dear Rolf….. 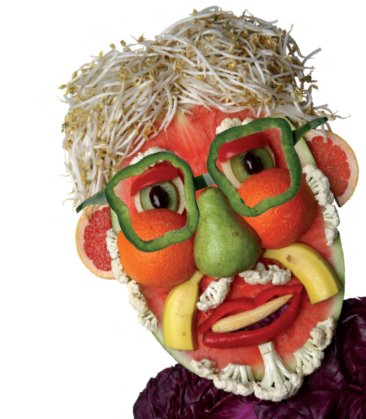 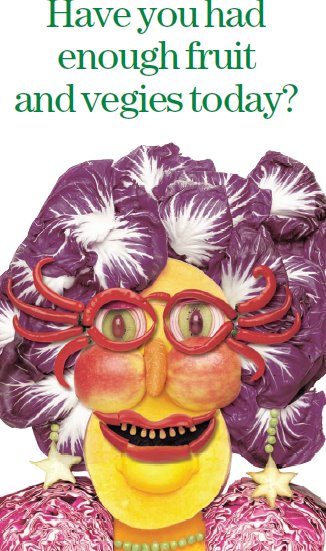 Watch the ads online, they are such fun, and see Rolf create some vegie masterpieces including of course, a healthy cabbage clad but still inscrutable Mona.(Rolf gets in the picture in the background) 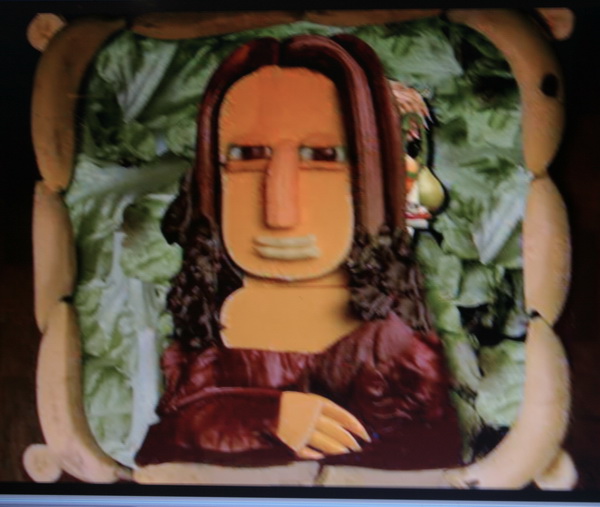 …and, joy of joys….a colouring page which I shall be getting right down to after breakfast ( I LOVE colouring books, all that tedious drawing done for you!) 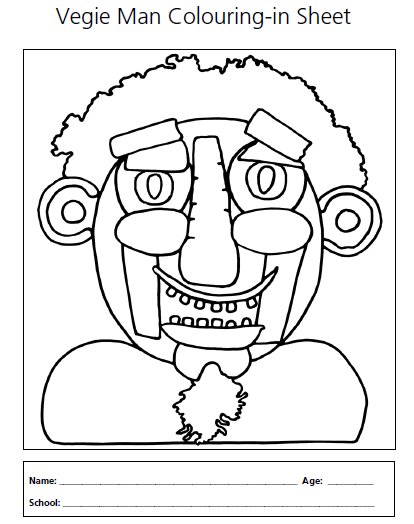