Yesterday I had the pleasure of meeting Elvin, a local beekeeper who has found me a model for my bee and lavender painting, a deceased little worker bee, just perfect for some studies for the painting.
It was particularly interesting to meet Elvin because he is a “natural “ beekeeper and builds Top Bar and Warre hives, in which the bees build their own combs. 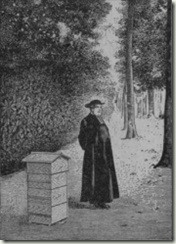 Picture of Abbe Warre with his hive from Biobee site

This is the wonderful Abbe Emile Warre who developed the hive also known as “The People’s Hive”. There is a super site called biobees.com where you can find extremely comprehensive info all about Warre hives.
It is written and compiled by David Heaf , see more here. It’s an interesting story about a kind man who wanted to develop a simple, natural, bee friendly hive.

He apparently experimented with over 300 different types of hive before coming up with a top bar hive which basically allows bees to do what they do naturally and build their own combs.
There is a lot more to it than that of course…go and read more, it’s fascinating!

From Elvin’s site Majorbeehives.com you can order one of the beautifully simple Top bar or Warre hives and here is photo from his site of a Warre hive in the snow, reminding me just how cold it can be in the UK. 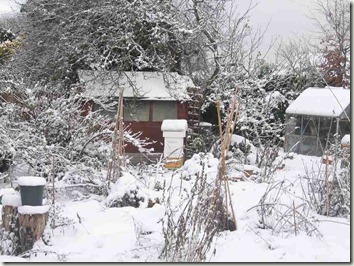 Elvins snowy beehive. He has some wonderful photos of the natural combs too.. 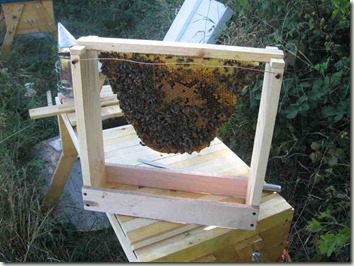 I am going to read more about natural beekeeping. If/when I eventually have a house or a garden I will be very tempted to have one of these bee friendly homes. 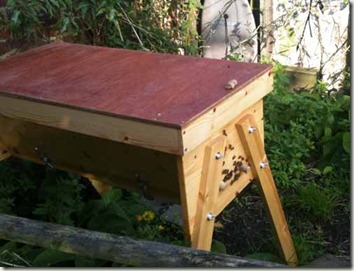 Some busy happy bees arriving with some very full pollen baskets to Elvin’s Top Bar hive yesterday.
There was also some sun, unlike today which has been relentlessly cold and miserable.. that’s the East coast for you! I asked him where his bees would be foraging now..where else but on ivy of course. And today I found some more ivy with more ivy bees, wasps and honey bees. The ivy is also festooned with many spiders webs, those big fat spiders that come out in Autumn (photos to come).

I spent quite a long time rescuing a couple of honey bees from the sticky webs.
A wasp had already been wrapped up and stored for later…oh dear. The bees took some time to rid themselves of the remnants of the web but eventually flew away just fine. I am rather hoping they were Elvin’s bees.

Elvin’s Honey Bee Sketches. It’s a while since I drew a bee so I wanted to make a few studies. Little honey bees have endearing heart shaped faces and rather attractive spiky hair on the top of their heads. 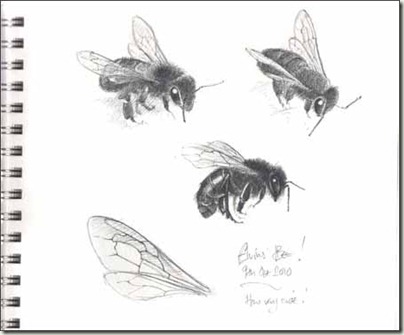