Well it’s Valentines day, and as life here is generally bound up with plants in some way, I had decided to make my nearest and dearest a home made (yet another) plant-themed card! Well these are times of thrift and I have been thinking of designing some cards anyway, so this is a sort of early prototype. I made a scraper board of the Telegraph Plant seed pod and combined it with the earlier pencil drawing of the stem and leaves in Photoshop and added these nice little telegraph diagrams to spell out the message. Ok, I admit, it is a rather obscure way of writing a message, but not everything needs to be obvious does it? I did put the easy-to-decode key on the back for those whose telegraphy might be rusty!..and it wouldn’t take a huge intellect to imagine what it might say on this particular day.

So, my Valentine card with a little help from the Telegraph Plant which I wrote about before here 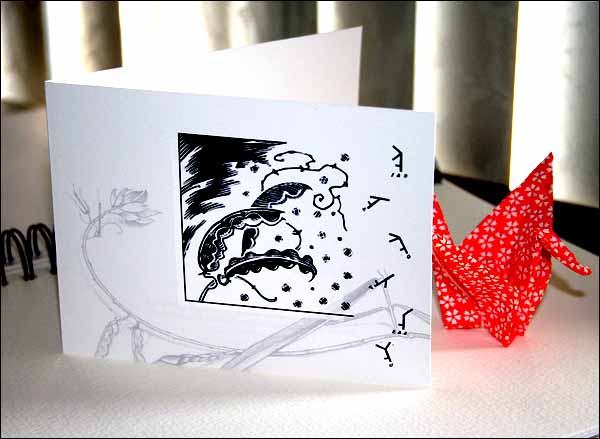 I like playing around with images, meanings and words, so I am planning a series of scraper board images, possibly for a couple of small handmade books or cards. It will be called “Gone to Seed” …another good reason to explore my favourite seed pods.

St Raphael v St Valentine
Apparently, according to the BBC, if you are already hitched you can thank or blame St Valentine, but for those who are looking for a soul mate, it is St Raphael not St Valentine that you should petition.
Back in biblical times St Raphael seemed to do a successful job for Tobias’ dangerous liaison with Sarah.
“Raphael, according to legend, helped Tobias enter into marriage with Sarah, who had seen seven previous bridegrooms perish on the eve of their weddings.” more here . 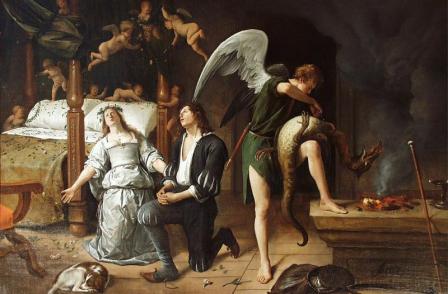 Tobias and Sarah by Jan Steen. There is an interesting history to this painting which was once cut in half and owned by two different people .. read more about its reassembly here

In order to avoid a similar sticky end and drive away the demon, Asmodeus who is due to attack him on the wedding night, Raphael instructed Tobias to burn the liver and heart of a giant fish which he had killed on his journey. The noxious smoke repels Asmodeus who flees to Egypt where Raphael binds him and renders him harmless.. Phew!! .. all this and more can be found in the robust book of Tobias in the Old Testament.
The equivalent dragon these days is presumably the bride’s father or worse, the groom’s mother.. 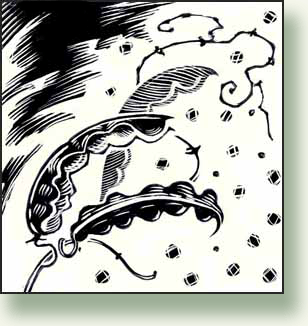