Everyone seems to have a cold at the moment.. and I am no exception.

When it started, well over a week ago it seemed innocent enough. You know the kind, three days with a throat full of barbed wire and another three days with nose full of glue and then it’s over, but not this one.

This one has quietly and slowly developed into a real horror ( I don’t get many colds so am whining) A week on and I still have broken glass in my joints and lead in my limbs.
Sometimes you think a nice little cold will give you an excuse to snuggle up in bed with a good book and comforting hot drinks but mine seem to rob me of all brain activity so reading has also been impossible.
It’s all VERY FRUSTRATING. Add to that an injured shoulder which is, currently, making it very painful to type or draw and I have been thoroughly miserable.
However on Saturday I dragged myself out of bed and wedged my aching arm into the corner of a railway carriage and went to London for a day of Hoverfly Identification at the Natural History Museum. It will take me a while to get my thoughts and discoveries about the wonderful world of hoverflies down on paper, but the journey to London was rather, unexpectedly, lovely.

Huntingdon to London on a Frosty Saturday Morning
At 7.30 am, when we left the house, the morning was very still and very cold with a full red sun on the horizon cut in half by just one single sliver of cloud. All other colours were frosted and pale. The novelty of seeing a frozen countryside after the eternal green of Florida has not yet worn off. Everything seems so fragile and delicate in comparison. Here tiny twiggy birds nests nestle in bushes or are strung hammock like between branches.
There, lines of infinitely varied little naked hedgerow trees are ranked and silhouetted against a rusty sky.
At 8.00am I am on the train travelling South. If I look East everything is back-lit by the sun. If I look West there are long cast shadows. The colours are the palest terre vertes, silvers, lilacs, and oranges. The buildings are black. This early on such a bitterly cold morning very little is moving, except this train and steam.

Steam is everywhere, taking on many different shapes, sizes and directions. In the stations restless, cold, people, huddled and muffed in scarves and gloves exchange puffs of steaming words. As we travel though the countryside thick steam spirals up from clamps and muck heaps, one has ignited and there’s a rush of scarlet flame. In the fields we pass some stocky gypsy ponies. Haloed with light, they are motionless, their long coats bristling with frost.

They blow streams of hot breath from velvety icicle-whiskered noses. They could almost be smoking pipes. Coming to a light industrial area, tall towers of steam rise straight up from tall chimneys.
White cartoon exhaust rings link waiting cars at the crossing gates. Here is a housing estate where the mock Victorian street lights, switched off an hour ago, are fleetingly reignited by a low, now golden, sun and all the identical houses in the identical streets have identical chimneys where all the short bursts of slanting steam are conforming to the will of a slight breeze.

Exuberant bountiful steam from one chimney casts busy shadows onto a nearby wall and light airy-fairy back lit steam drifts up from a square black chimney and evaporates in the morning haze. Higher, much higher up, dead straight vapour trails of planes criss-cross the clear blue sky. Steam is fascinating.

But as we reach London, where once smog and fog would have choked the life out of you, the rows of Victorian chimneys are quiet and unused. And I remember that long ago, I arrived at Kings Cross, not scurrying in on a little four coach electric train but making a much grander entrance, enveloped in clouds of steam, deafened by noise and giddy with excitement about a day in London, little legs climbing down from a magnificent snorting beast that surely must have been the Flying Scotsman. 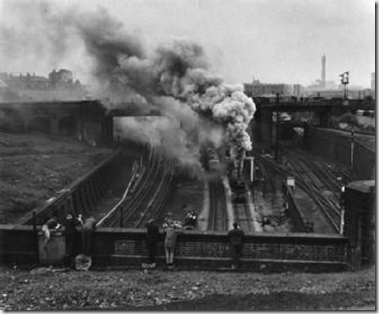 he Flying Scotsman steaming out of Kings Cross in 1968 from the Museum of London Collection Exciting hoverfly info to follow!