There is some very good nature news from Killarney Bay today. Chris’s delightful carambola tree (here) under his TLC has managed to produce some flowers and tiny star fruit. At the moment they are about as big as a fingernail but we live in hope. 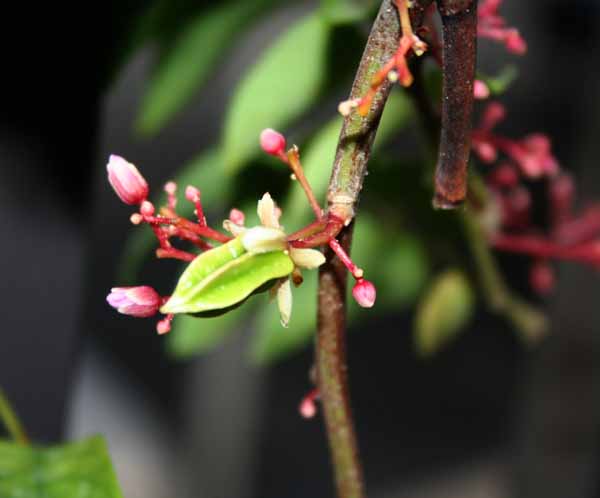 Some of the tiny seeds I planted are growing (most excitingly, the Jatpoha, Buddha Belly seeds here) and the last year’s loofah, which Susan gave me and has been sitting on the floor of the shower for a few days, is sprouting. 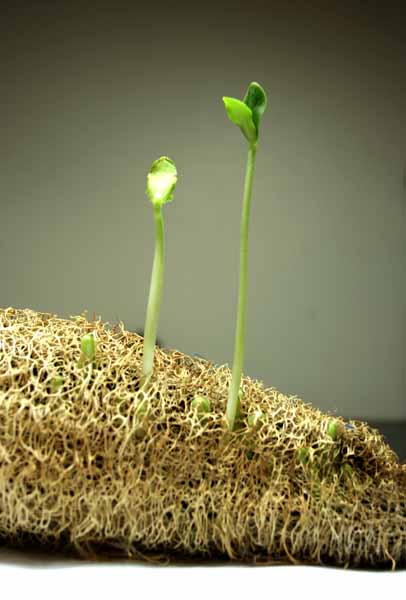 It looks like some strange animal…just about anything will grow here!
I have no idea what to do with it now, it’s disconcerting to have a shower with a living plant. Growing a loofah wasn’t part of my plan as I really don’t have the space. I may have to indulge in some guerrilla gardening and go and plant it somewhere else. My tiny balcony, about 3ft square, is all I have, so plants need to be small. However it is so rewarding when things grow and I can’t resist trying a few seeds here and there. Most of the random cuttings which I stick in any available pot are doing well and I have hopes for some Desert Rose seedlings

My latest seed pod, complete with seeds, is from the star anise. I knew of the spice, but I don’t think I have ever held one of these little stars in my hand until I found this plant, or even considered how it grows. It’s a glossy shrubby thing, which grows by the lake at Leu, but I can’t find the label so I am unsure of the variety. This is not good, as it could be Illicium verum, the real edible and delicious spice, star anise, or possibly Illicium parviflorum, the yellow anise, which is toxic! I do know it is not Illicium floridanum whose pretty leaf I drew before here, and allegedly smells like fresh fish. ..
Whatever variety it is, its leaves are delightfully fragrant and do smell very much like aniseed when crushed. The real star anise is widely used in Indonesian and Indian cuisine where it is a major component of garam masala and, along with fennel, cinnamon, Szechuan peppercorns (not actually pepper at all), and cloves is an ingredient of the traditional Five-Spice powder of Chinese cooking. This combination of spices was prepared to incorporate the 5 elements of the Chi, and create a harmonious balance of bitter, sour, sweet, salty and pungent, the yin and yang kept nicely in order. Originally it was used as a medicine and ingredients do differ, sometimes prepared with ginger and nutmeg or cardamom.
Sensible Chinese proverb; “He that takes medicine and neglects diet, wastes the skills of the physician.”

Botanically this is an ancient group of plants, closely related to Magnolias but now with their own genus Illicium whose Latin name translates as, “allurement” no doubt referring to the enticing fragrances produced by most of the species, except the fishy one! Real star anise was in the news, a few years ago now, as the base for “Tamiflu” a treatment for the deadly bird flu virus, sadly it’s not as easy as just including a star anise pod in the weekly curry.

It’s not a very elegant pod when it is green, as I have drawn it. It grows on the end of stout stems and is quite hard to see in amongst the leaves. Once it starts to dry out, which it seems to do section by section, the pod turns back on itself and the ripening seeds push out, splitting the top surface of each section of the pod with some force. I had a small, nearly ripe pod on the table last week which pinged its seeds round the room.

I don’t often do this but as I teach occasionally it’s nice to have a step by step drawing example. These stars can look complicated, but are really a series of circles and points, joined together. I counted 13 points on each of the pods I have. Luckily they are not perfectly symmetrical, but in botanical terms it is important to get the right number if nothing else. This might be how the plant is identified.
I work in a simple 8 x 8inch cartridge sketchbook for smallish leaves with HB to 4B pencils. I have tried smoother papers but like something with a bit of tooth, it’s more forgiving. I have a scalpel for sharpening the pencils and a putty rubber. The sprig was put in some Oasis in a glass of water
to hold it steady. 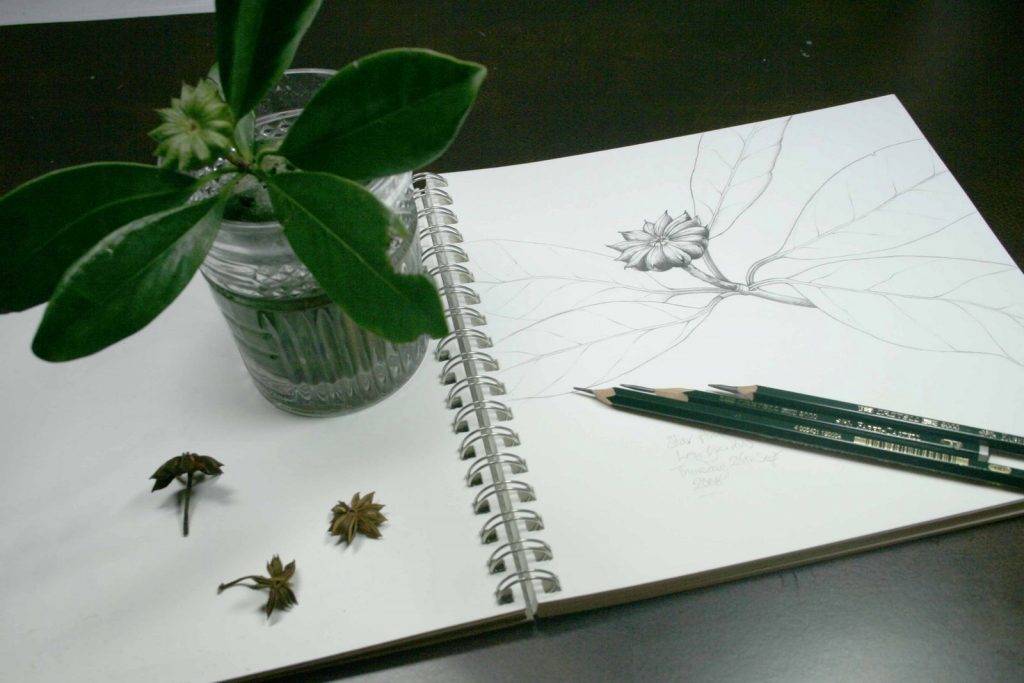 1. A few ellipses sketched in, to establish the shape and perspective. 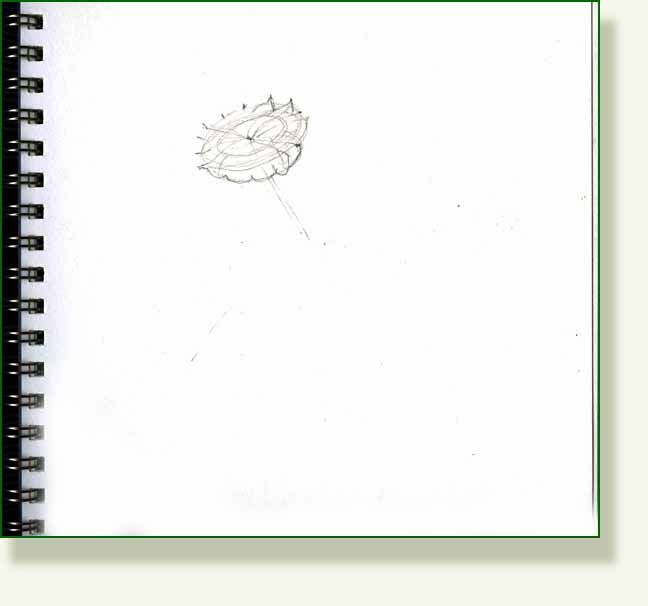 2. The thirteen points plotted around the circles and basic leaf position. 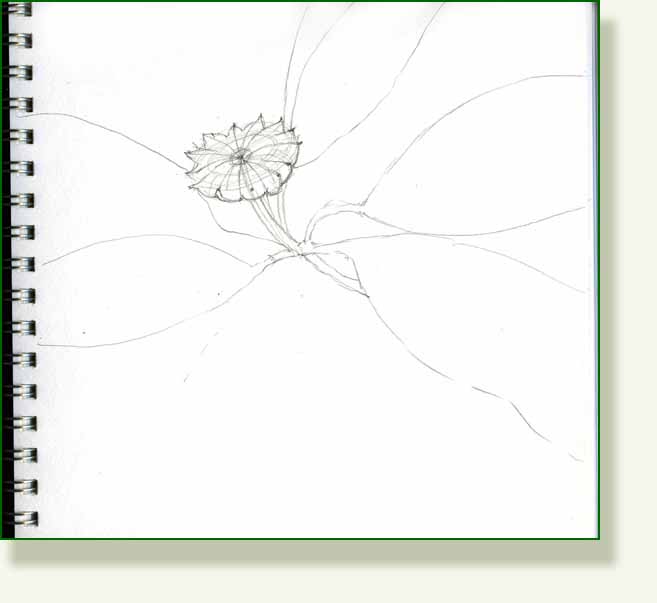 3. Getting rid of the unwanted pencil lines with a putty rubber. 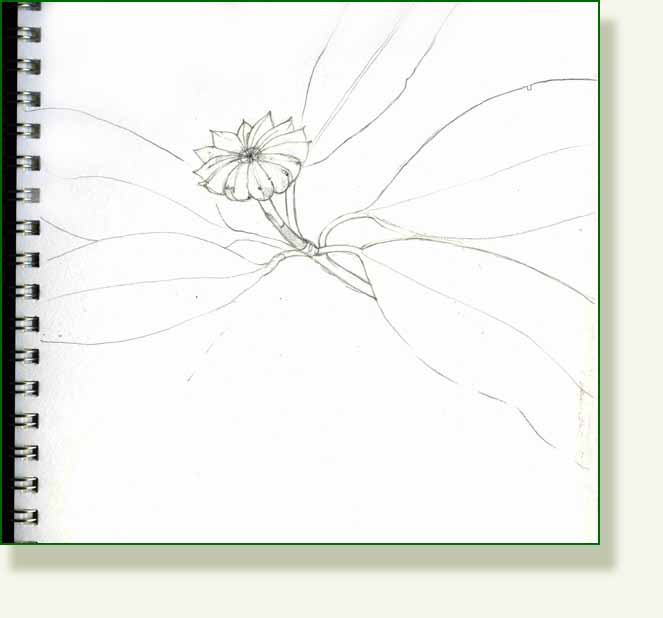 4. Some initial tone for modelling. 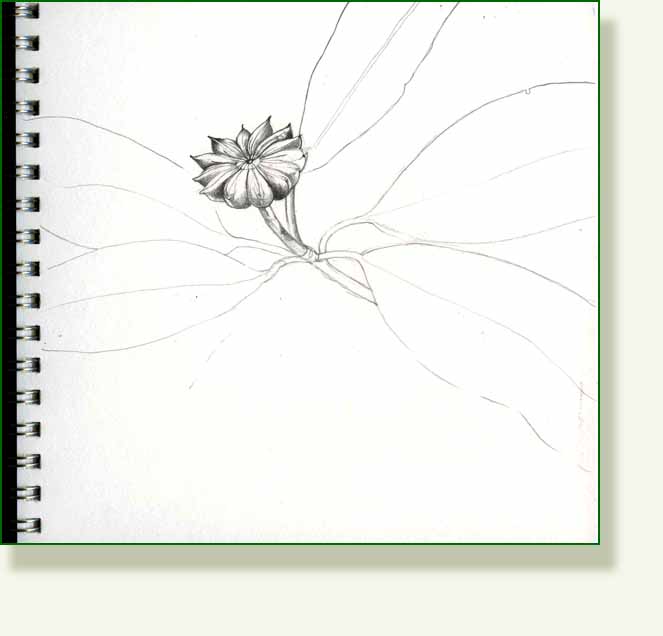 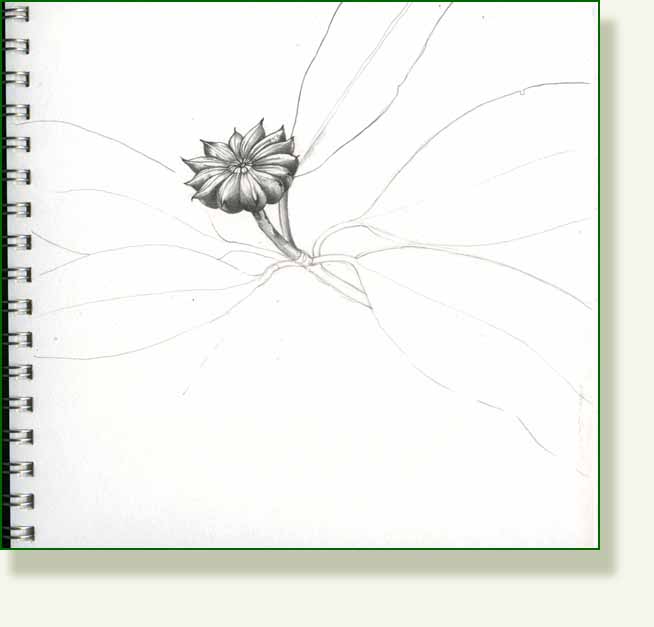 6. Final sharpening up of tones and some leaf detail. 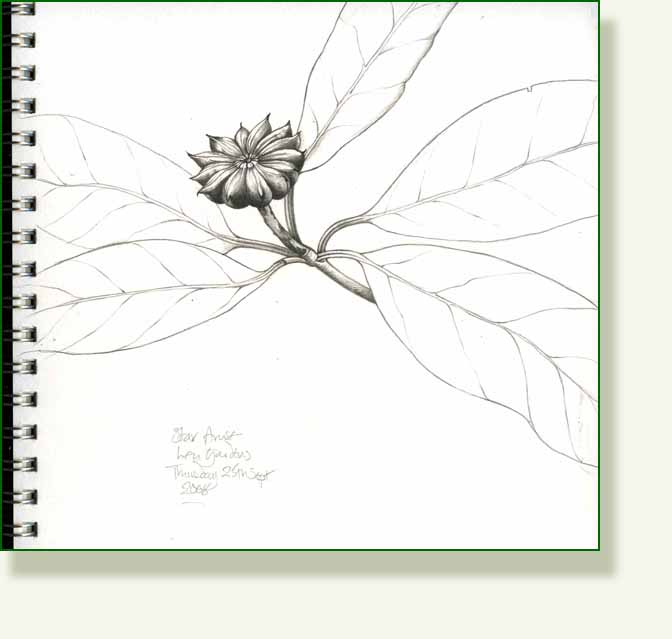 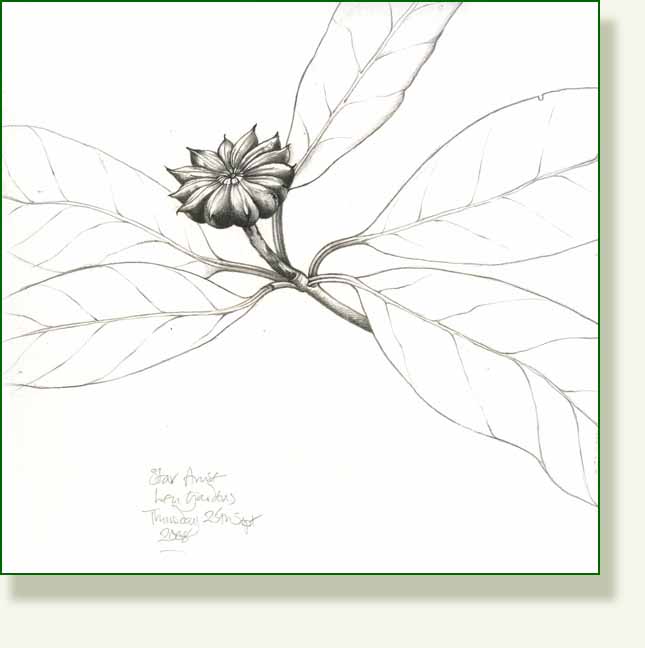