When I left this house, just over three weeks ago, there were still one or two mason bee stragglers, faded and tatty but the frantic activity of the last two months was done.

Our humming house has fallen silent, its facias, soffits and airbricks quiet and still… however, inside is a different matter.

The house has been “empty” of human activity for just over a week, although empty is never really the right word because there is always something going on, some “thing” is glad you have gone and will be taking full advantage of unhindered and undisturbed access.

This time it’s the spiders. In our absence they have been especially busy and for an arachnophobe this can be daunting. Muffling thready webs had rounded all the corners, glued together the doors and windows and linked  together all the furniture in one huge zip line playground for spiders.

Open any widow and with that soft, sticky, sucky web-tearing sound, a hoard of tiny spiderlets rush in. There are fat bodied spiders which hang around the windows at night and little stumpy black ones which seem to like to snuggle into clothes you untidily leave on the floor.

There are some neat spiders that fold themselves up quietly and unobtrusively in corners during the day and then rampage around the ceiling at night. And a few days ago there was a big grey house spider the size of a plate.

They have all happily moved in.  There are lots of them but their numbers are as nothing compared with the spindle shanked long leggedey creatures that have now fully occupied every room ; the ceilings, shelves and corners, the insides of cupboards, under the sinks, behind cupboards, in the bathroom ( they like humid!) and behind the sofa.

All these areas have their own elegantly hanging long legged inhabitant. 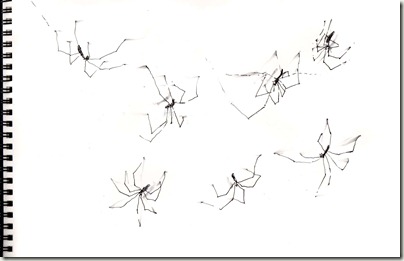 My rough sketches here, done from quite a distance I should tell you, make them look too dark and substantial, when really some of them are very pale and barely there.

In my ignorance I had always thought they were “harvestmen” but they are not, these are Daddy Long Legs spiders.

Harvestmen, which yes, are also cohabiting with us, are something different.

If, like me, you didn’t know your Tipula from your Pholcus or your Metaphalangium here is a neat drawing and caption from the University of Washington’s Burke Museum’s site Spider Myths which explains it all.

“Will the real “daddy-longlegs” please stand up?”
That confusing term is used for all these widely different creatures: (left) a crane fly, Tipula sp.; (center) a pholcid house spider, Pholcus phalangioides;(right) a harvestman, Metaphalangium albounilineatum (one of many similar harvestman species).”

To be fair I did know that Tipula, what we call daddy longlegs are flies and not (shudder inducing) flying spiders.

Some nice facts about these elegant spiders are that they hoover up all sorts of other bugs, including other spiders and, not perhaps so nicely, also their relatives. They are also known as Vibrating Spiders because they will shake their web when threatened. Supposedly to make themselves a difficult blurry target or perhaps just making their predator a bit dizzy. 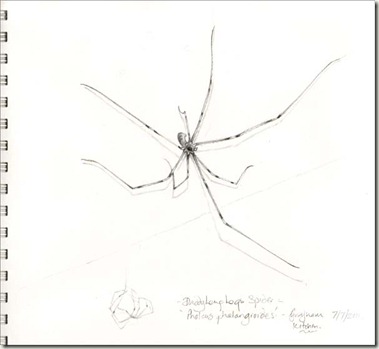 This is the kitchen spider who hangs just above my head as I sit here typing.

I have tried twanging this spider’s web to encourage a bit of vibrating but this one is not easily fooled.. or just, perhaps, too full of its own relatives to have enough energy to jiggle about.

Then earlier today who should come sauntering along the wall but a real harvestman. Now I know, I can easily see the difference. These little things generally seem to lie flatter to the wall and of course have round bodies and those two short front legs. 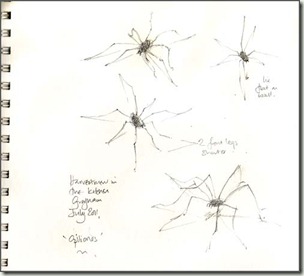 I am wondering now, who eats who?

I think after yesterday’s post I was more aware then usual of spiders, and one of the first things I came across today was an almost invisible web, strung across the sea grapes, and in the middle, carefully threading and mending was this amazing little spider. I have never seen anything quite like this. I found out about it by Googling “spider that looks like a star”. Well I thought so, locally they are called crab spiders. 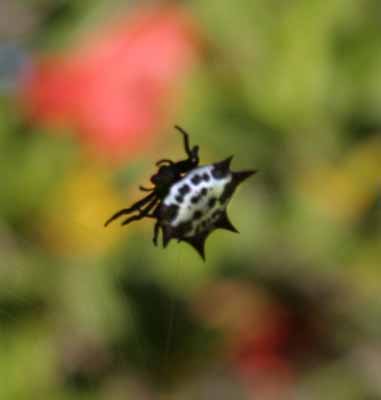 I am sure Floridians will be very familiar with this little creature with a big happy face on his back. This is the Spiny Backed Orb Weaving spider. Gasteracantha cancriformis
My photo is not too good but here is what it really looks like from a wikipedia photo taken by Mkullen in Hernando, Florida here. 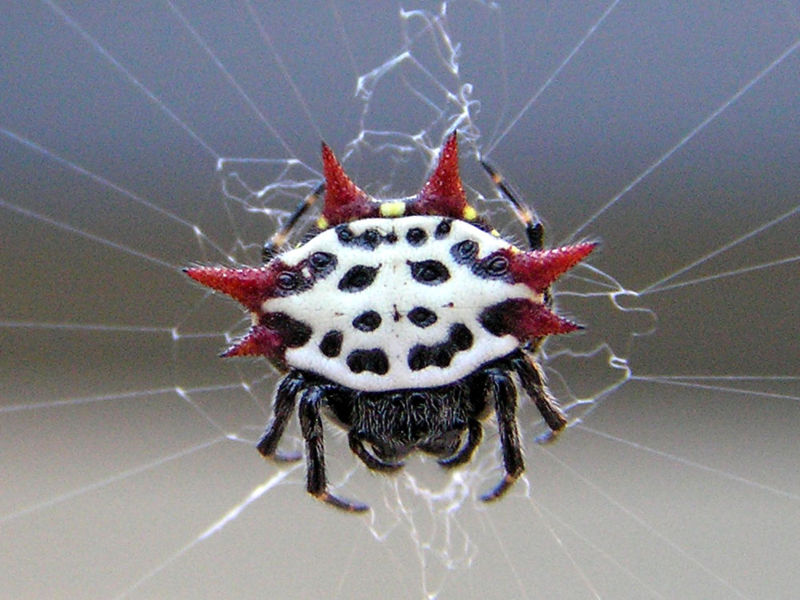 They come in a variety of different colours some yellow, some red. There is a mountain of information about them on the web, (as there would be…:)…), and I now know more about them than I really care for. But these little spiders are pretty, beneficial and harmless and one thing I didn’t know is that baby spiders are called spiderlings…that makes them almost acceptable.

The garden was very busy today and I could not settle, everywhere I went I was either in the way or my chosen spot was busy with gardeners. So I decided just to sketch more or less on the hoof, with the small 9×6 inch sketchbook and a big soft water soluble pencil. I was looking more up than down today, mostly at the trees. I am fascinated by the huge live oaks whose limbs spiral skywards then arch and curve back to the ground sometimes with the accompanying frill of little resurrection ferns dancing along the length of the branch. These scribbly sketches are great for looking …just looking, looking looking and looking again. You have to really take in everything to make even a few lines.. an exercise in reduction. At the end of it you have on paper what has interested you, even if it is only one beautiful curve. To the artist this is invaluable, to the viewer I know, it is often incomprehensible.

The first three are of paths. I like paths and especially paths that branch or curve away.
This is the avenue of Camphor trees with the right path leading down to the lake. 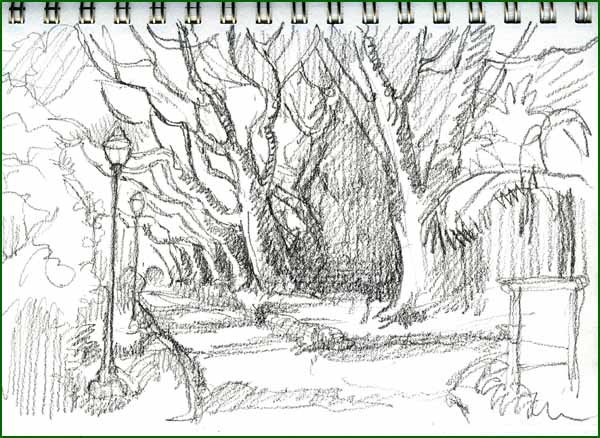 A diverging path by the lake 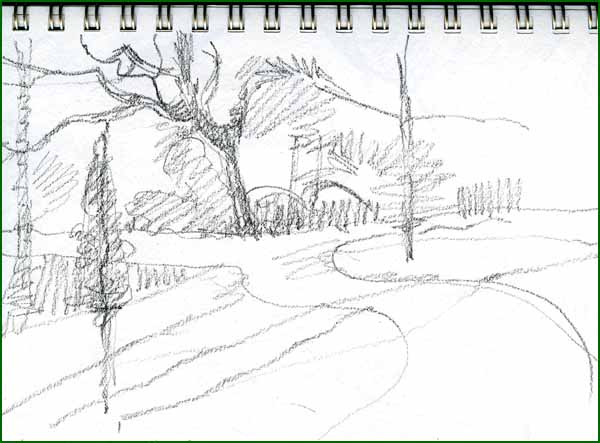 …another path by the lake. 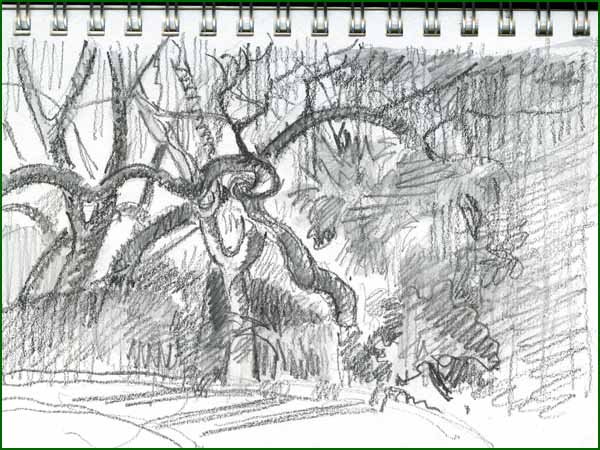 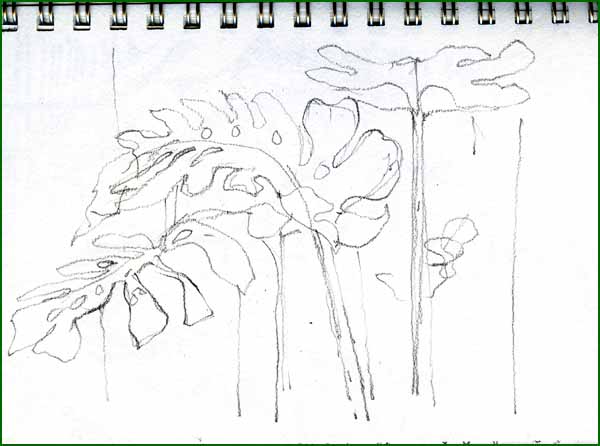 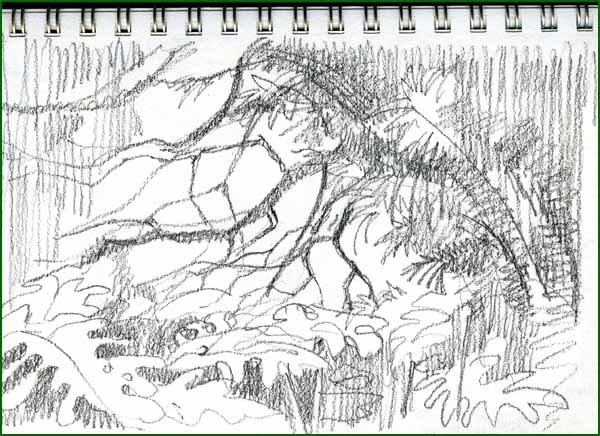 The spiralling trunk of a live oak 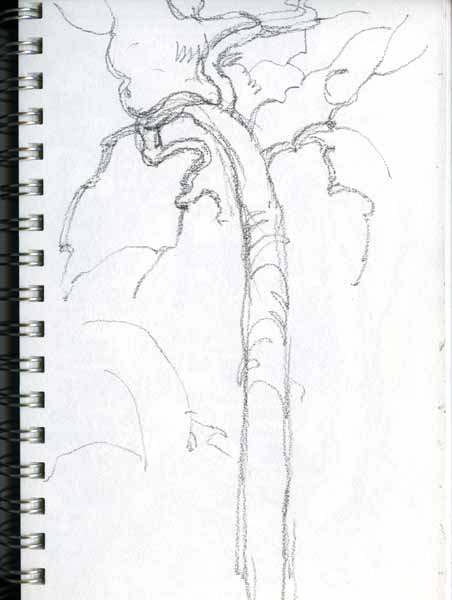 A view of the old Leu House, with its balconies dressed for Christmas. 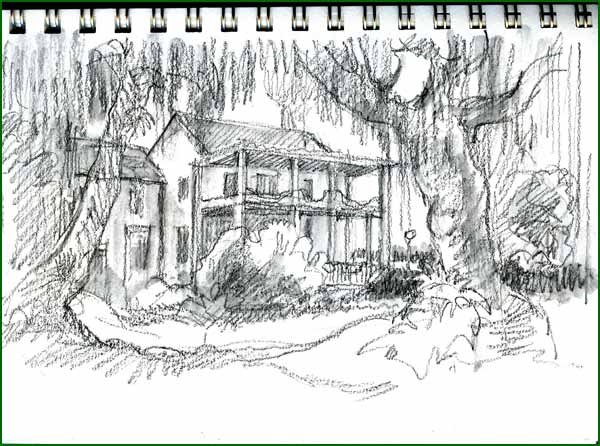