Yesterday morning I was delighted  to see the sparrow nest had survived the night. It had developed quite a bit since the day before and was now a lovely shapely domed nest with a sheltered side entrance and not too many trailing bits.

But they carried on adding and adding. You just want to go out and say “Stop now!! It’s fine!! It’ll do!!”
But he kept the grass and twigs coming and she kept folding them in. You tend to think they know what they are doing but it was definitely beginning to look too big!
I sketched the nest at its apogee.  Built up at the back to sit snugly in the corner, side entrance away from the prevailing wind, it was looking good,  but now spilling right out over the ledge. 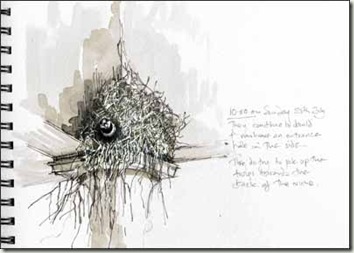 Predictably,  I have now become fascinated by them and go outside and watch them. I made a few sketches of them perching on their ledge. The male bird was out and about more, stopping in between twig gathering trips to bounce along the outside edge of the parapet chirping furiously at everything and everyone, me included. 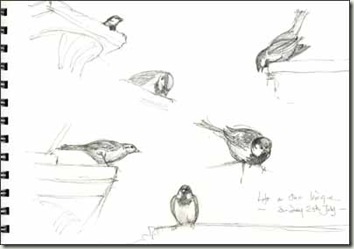 This little sketch perhaps shows what he was doing best. There was a lot of fluffing out of feathers and fluttering of wings and leaning right over to shout. 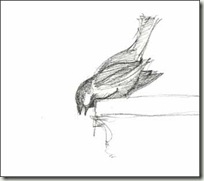 I was quite taken with all this machismo from such a little bird so I  made a couple more sketches to work out a pose.. 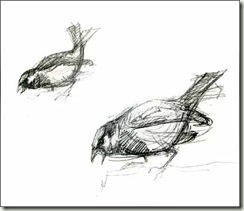 Shouting from the Ledge 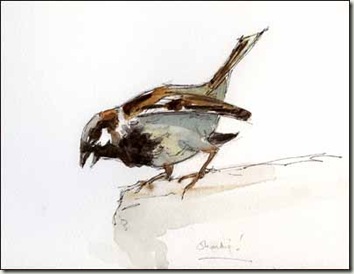 **POSTSCRIPT**
We went for a bike ride in the afternoon. While we were out a strong breeze whistled up from the south, turning the gap between the building and the columns into a wind tunnel.

Yes .. you guessed, the nest had blown away, again. The whole damn thing,  every twig, every leaf. Hours of careful weaving, innumerable tireless trips to collect those strands of grass.  The sparrows were back sitting on their empty ledge again.
Then down swooped the male and came back with a large bunch of grass. They are starting  all over again!  I didn’t know whether to laugh or cry!!

Yesterday we caught the tail end of tropical storm “Bonnie”. It flew in and flew out spinning the pine needles, carving runnels in the sandy soil with torrential downpours and blowing away, for the umpteenth time, the sparrows nest.

The sparrows build their nest on top of one of the mock plaster columns which front the apartment entrance. We can see this little family and their comings and goings from our first floor kitchen window and I have watched them build and rebuild this nest a dozen times.
It  was the same last year.

Yesterday it blew away three times, got tangled up in the nearby bush and was doggedly retrieved bit by bit, but  “Bonnie” was, truly, the last straw.
She snatched the bundle of twigs and trailing grass and whisked them high and wide and away out of sight.
I have long wanted to record these very sweet little birds and yesterday while the rain and wind raged about, the sparrows sat disconsolately on the bare cornice of their home, sheltered from the storm and looking round for their lost nest. It was a good opportunity for some sketches. 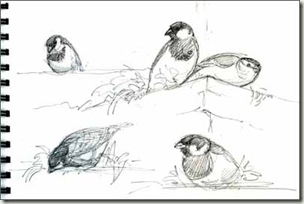 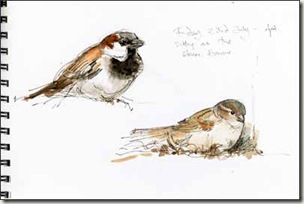 Part of the nest must be tucked in the hollow of the column’s capital, enough to make it worth persevering with anyway, because, sure enough, this morning the sparrows are back, optimistically rebuilding and chirruping happily. I am thinking of suggesting a beginners course in structural engineering to them…more of this nest and the sparrows soon. 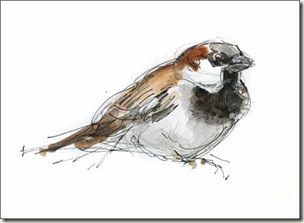 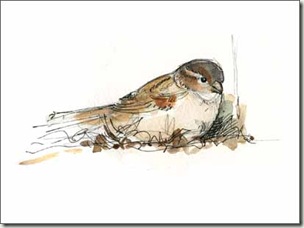 …just sitting out the storm.