I have spent most of the day trying to identify the last 3 items I brought back from the trip, 2 pods and some seeds. It’s terribly frustrating when there is little to go on and my knowledge, albeit growing, is still slight. What I was convinced was an ash, because of its seed “keys”, turned out eventually to be the Tree of Heaven, Ailanthus altissima. 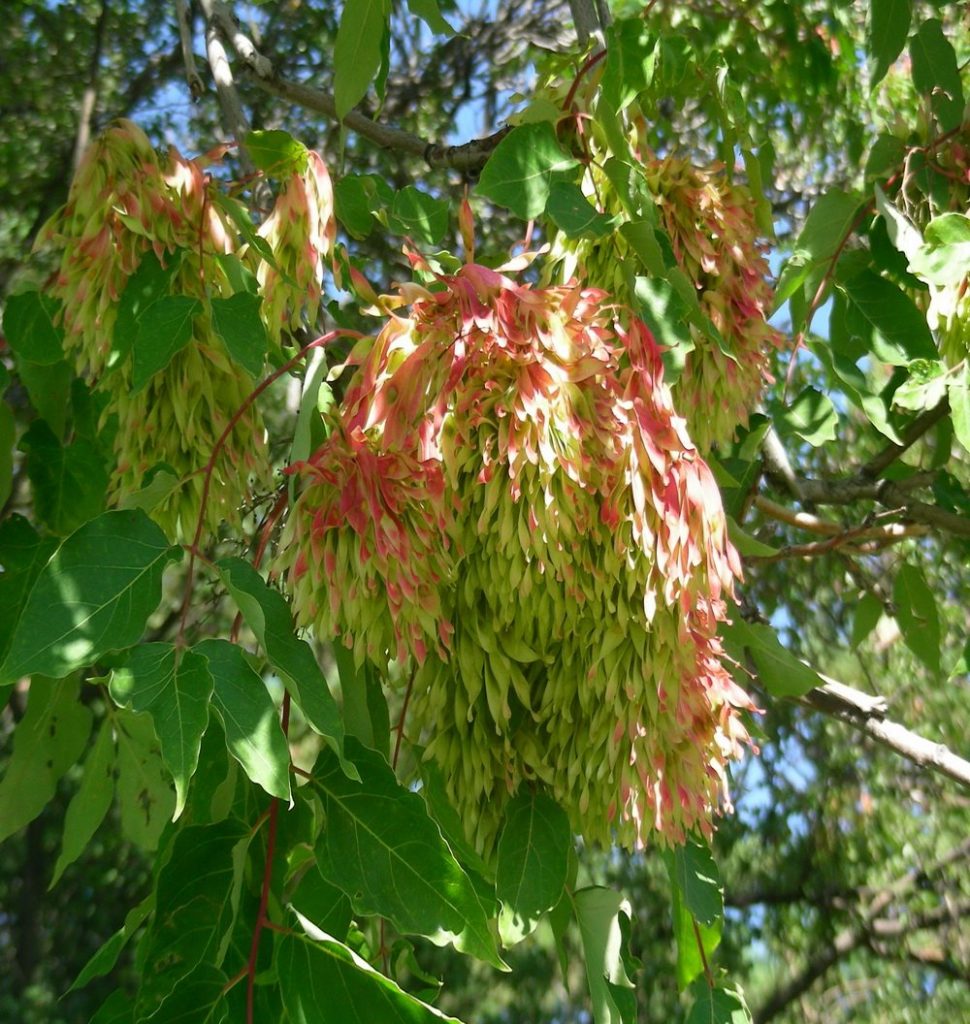 As I often do now, I turned to Dave’s Garden here for some quick info and found this to be one of the most hated trees I have come across. There are 79 comments on the board and 59 of them are negative. Invasive weed, impossible to eradicate, suckering habit and a bad odour, in fact not much to recommend it at all. I suppose it equates with ground elder in the UK.
What attracted me however, were the beautiful seeds, twisting and spiralling in big bunches, turning from red to yellow set amongst pretty and delicate leaves. It was growing close to the State capitol building in Santa Fe (which deserves a mention in its own right, as it was stuffed with art).
I am sure Santa Fe is keeping a close eye on it and its invasive habits.
But to be called “the tree of heaven” , it must, somewhere, at some time, have been appreciated and Wiki does have a long and interesting entry about this tree here. It originated in China where it was an important medicinal tree and food for the very beautiful Ailanthus silk moth. 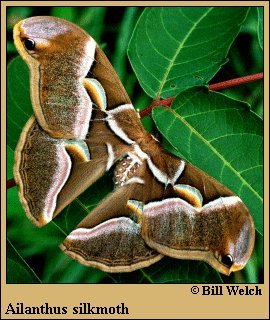 The silk produced was not so fine and soft as that spun by the Mulberry silkworm, but was very hard wearing, so much so that clothes could be passed down from generation to generation. Commercially Ailanthus silk was tried in France and later in 1861 in Philadelphia USA but found to be too labour intensive to be economic, also the street lighting was found to disturb the moth’s breeding habit!

There are, despite a general thumbs down for this tree, some pleas for its consideration in barren, dry and even toxic locations. It is a survivor par excellence and dreary inner cities, old quarries and industrial wastelands could at least have something pretty and green and living. Whether you decide it is heavenly or hellish depends very much on your situation. An old review puts the case for some urban consideration better than me. We are lucky here in Orlando, it’s hard to find somewhere without a tree.

“One of the depressing aspects of congested areas in a big city is the almost total absence of trees. Either they are poisoned or they are starved for food, water and light. Smoke and fumes, dust and grime, refuse and ashes, cinders and salt, make it impossible for our native trees to survive — especially when the soil around them is covered with pavement or packed by trampling feet. But some people living in such neighborhoods, and instinctively yearning for a green growing tree, have found one kind that will thrive even under those conditions: the Ailanthus.”

It was a busy day today and I had no time for a detailed drawing of a bunch of 40 twirling and twisting seeds so I did a couple of colour sketches. Two seeds were sitting on my drawing table and as it was late afternoon the sky outside was full of storm clouds. There are also two large ants which have taken up residence in the studio which must have hitched a ride back from Leu one day. Tomorrow I am repatriating them. I was thinking about them and their view of the world as I drew.
Sometimes these little thumbnail sketches may lead to something, sometimes not.
___________________________________ 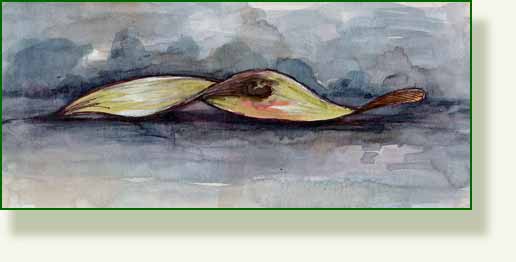