This is not my territory. A beach of unforgiving shingle where each step forward is sucked back half a pace by sliding pebbles.

But I am loving seeing the sea again and the weather has been glorious over the last two days. So on Tuesday I trudged along the shingle’s edge accompanied by a little white butterfly who danced so effortlessly next to me through the fading summer flowers.
I somehow don’t expect butterflies so very close to the sea. You would think your average plant would take one look at shingle and decide to go elsewhere but there is a surprising variety of plants here.

Red and white valerian, ragwort, mallow, brambles, yarrow, old mans beard and more and growing nearest to the sea, hardy clumps of grey green Sea Kale Crambe maritima whose long tap roots will twist 2 meters deep into the earth in search of fresh water.Even a bee, a pretty little Bombus pascuorum was busy in a patch of vipers bugloss.

On the tideline is the usual flotsam and jetsam, bits and pieces thrown up from the Channel plus a variety of “black” things.
I like them.
Here is one of them, a crispy bit of one of the “bladder” wracks left high and dry, contorted even more by the warmth of this sunny late summer day.

I think this is Ascophylum nodosum or the Knotted Wrack judging by its linear form and single bladders. The Bladderwracks, as I know them, are wonderful plants. I remember as a child squidging bare footed over seaweedy rocks in Wales, popping the slimy airfilled bladders.

Fucus vesiculosus, the real bladderwrack was the original source of iodine and they all seem to be edible and have medicinal benefits of one kind or another. I put it on a windowsill and drew it.

Not really much more than a silhouette but with a curling cast shadow which I liked as much as the thing itself. On the dusty windowsill was a small dead fly who I thought should be in on the act too.

It is a neglected house with many dead flies and, not to push the Dickensian analogy too far, there is more than a touch of Miss Haversham about it. A large grandfather clock has just been removed displacing longlegged spiders and revealing a wall festooned with dust laced cobwebs. More fascinating black things soon 🙂 …. 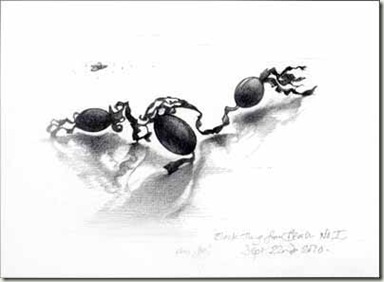