The slender and pretty little Girdled Mining Bee, Andrena labiata, is another bee you might easily mistake for some other insect. It has the distinctive red orange girdle and the males have a small white patch on their face.

It was brought to my attention by Jane at Urbanextension Blog who, oddly enough, as I was writing this yesterday posted two new photos on Flickr here  …bee telepathy! In her email to me last night she says this;

“I saw two or three males patrolling the flower bed that I saw them in last year. The males are so lovely with their white faces. I don’t think the females will be around for another week or so (didn’t see them until the 8th May last year – and all the flowers are behind so hope they find something to feed on –we do have some Germander speedwell that is out but the Star of Bethlehem is nowhere near )”

Jane’s photo of the Girdled Mining bee on Star of Bethlehem last year in Dorset 8th May. 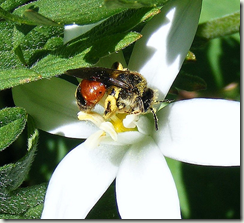 It just makes you wonder what impact the late spring flowers may have on  early bees? Her mention of Speedwell is interesting because I have read this is a favoured flower of the A labiata.

From an aesthetic perspective, it chooses a flower which shows it off very well, the orange/red set nicely against complementary blue. I am presuming the colour perception of its predators is not quite the same as ours.

The Painting and Ribwort Plantain

I have drawn the Girdled Mining bee perched on the top of a ribwort plantain head. Plantago lanceolata. Yes, I know, another annoying garden weed, especially in lawns where their relentlessly tough stalks pop up again and again and can cause apoplectic heart failure in mowers who like a perfect green sward.  But it is a good nectar source.
In her book, “A Book of Bees: And How to Keep Them” from 1998, American writer Sue Hubbell confirms that bees will forage from plantains, but records this concerned neighbours comment,    ‘“ Your bees must be starvin’,” lamented a friend in town. “ Why, they was workin’ them little bitty stems in the lawn. Poor things. Just stems!”’ 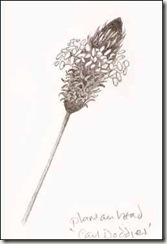 I have always been fascinated by the delicate bobbly heads with their quivering  stamens and of course we used to play the silly child’s game of Carl Doddies which I wrote about here, back in Jan 2008.

“It was said to have originated from a ” beheading” game played in the Jacobite times, the names derived from Bonnie Prince Charlie, “Carl” and King George, “Doddie”.”

You each have a long plantain stalk and try to knock the head off that of your opponents. It should probably be renamed “mowers revenge” although that would mean nothing to small children except the ones perhaps who have to earn their pocket money by mowing the lawn ( she says, from years of experience).

I am not sure if there is an equivalent game here in the USA, but it gave us a few hours of fun and there were really no shortage of plantains.  So spare the weeder and the weedkiller and let your plantains bloom, feed the bees and of course in the unlikely event of offending a bee you can use the leaves to soothe their sting!

The Girdled Mining Bee..on the lookout for mowers, small children, Jacobites or  possibly even a mate.. 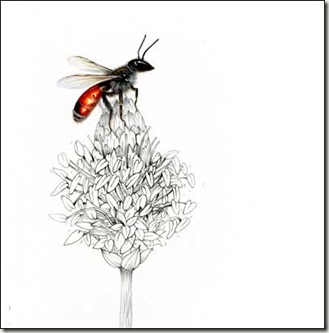