These three little fern fronds are from the Resurrection Fern, pleopeltis polypodioides..two words I intend to use constantly at the next Winter Park cocktail party. These pretty little ferns can be seen dancing along the lower limbs of the great oaks and making lacy collars round the bases of the palms. They are as synonymous with visions of the ‘old south’ as Spanish moss and Vivien Lee.
Their name comes from their amazing ability to go without water, it has been calculated they could survive for as much as 100 years, during which time they will curl up tightly and appear to be dead. Then, come that longed for shower, they burst into life again, the fronds reabsorb water, slowly regain their bright green colour, and uncurl, unrolling each leaflet to return to their original shape. This near perfect adaptation enables them to survive the hottest of Florida summers.
They are small, only up to 6 inches in height and grow from a central creeping root which threads itself along the tree bark. On old trees they form dense mats and you would think the branches would collapse under the weight but these little ferns are a light as a feather.

These particular ferns belong to the air plant family, strange and fascinating plants which, (when not glued onto horrible bits of resin “sculpture” in the UK and condemned to dust) attach themselves to to other plants, taking their nutrients from the air and from water that collects on the outer surface of bark.
In 1997 this little fern became the first “fern in space” aboard the shuttle, as part of an experiment to see if it would resurrect in space..today I hear they can grow marigolds in moon dust.

These are, as you can see, in their un-resurrected state but the one on the left is beginning to uncurl and its lower leaves are beginning to straighten out. They are from the little cycad I had drawn before here in my post “Dinosaur Food” but I do have my own small piece of resurrection fern which Pedro gave me.
Following his strict instructions I have tied it to a rock with raffia and the rock sits in a dish of water so it is watered by osmosis. I have to stop myself wanting to spray it constantly, as to see the fronds curled up is not what a caring gardener feels a plant should look like. Happily it is rewarding my restraint with some tiny new curly fronds. It’s a little darling. 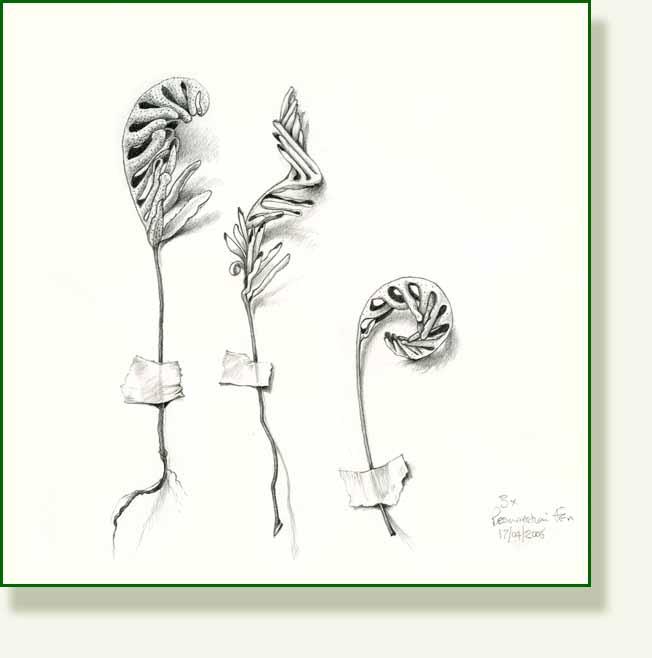