I am a bit disheatened by my lack of progress yesterday so I decide to try to learn from my first pansy mistakes and try another one.. this time a little different with a pale edge and a beautiful pink to burnt orange colour.

Laying the washes seems fraught with problems of drying too fast or too slowly, the paint creeping into forbidden areas or just refusing to budge and making horrible hard edges. I do a drawing first and then start painting, sketching a little spray of yellow rattle with beautifully shaped leaves while the layers are drying.
It’s all a matter of practice I guess, and I think I now know what I should be doing .. doing it is another matter.
I also make some colour notes before starting this time.
I am a bit quicker today.. that’s all I can say.
________________________________ 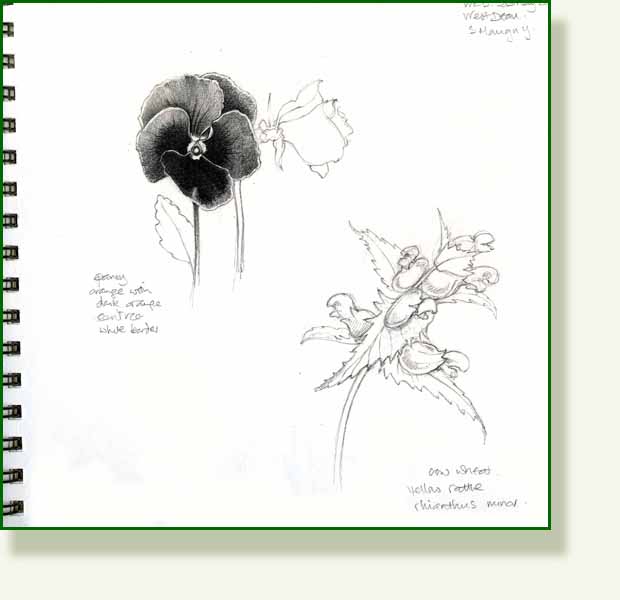 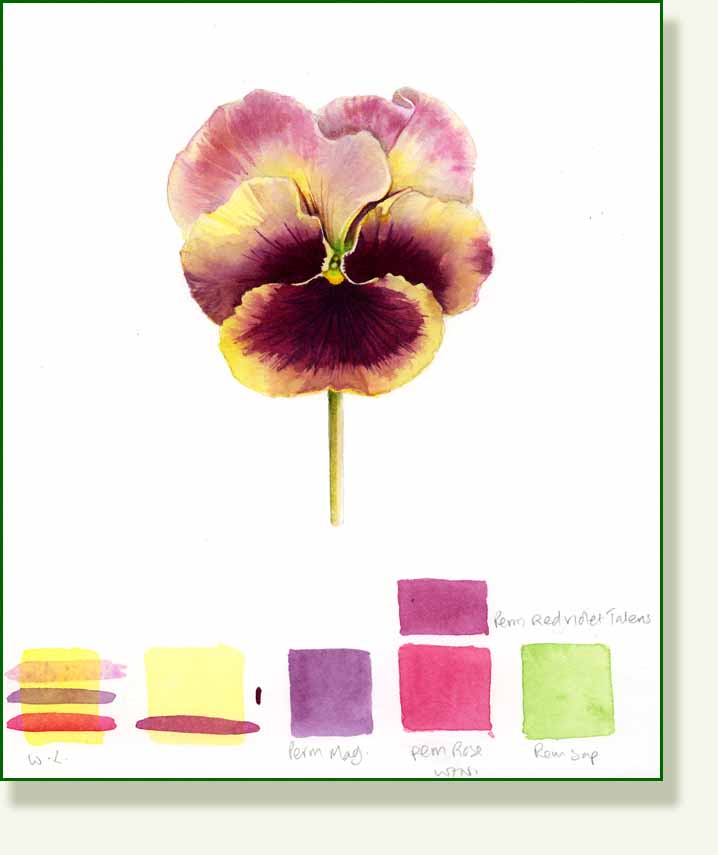 Day Two of the botanical painting course and I only feel able to tackle a pansy. I take a deep blue one with a heart of black velvet.
The drawing I now approach in a Liz Leech fashion looking hard at what is underneath and sacrificing a flower in the process. Sandrine is no doubt hoping I won’t be doing this on the gorgeous chocolate coloured calla lilly she has brought for us to draw.
The watercolour technique that she makes look so easy is very different from my normal style of brushwork onto dry paper. It is watercolour carefully overlaid, one wash at a time into wet paper. She makes it look effortless. It is nothing of the sort.
For a dark colour, really dark, like the inside of my pansy, up to 15 washes need to be laid, carefully darkening the colour each time taking care not to disturb the colour underneath. On this first attempt I keep forgetting to wet the paper, get wobbly edges and not enough colour, but I persevere.
______________________________________ 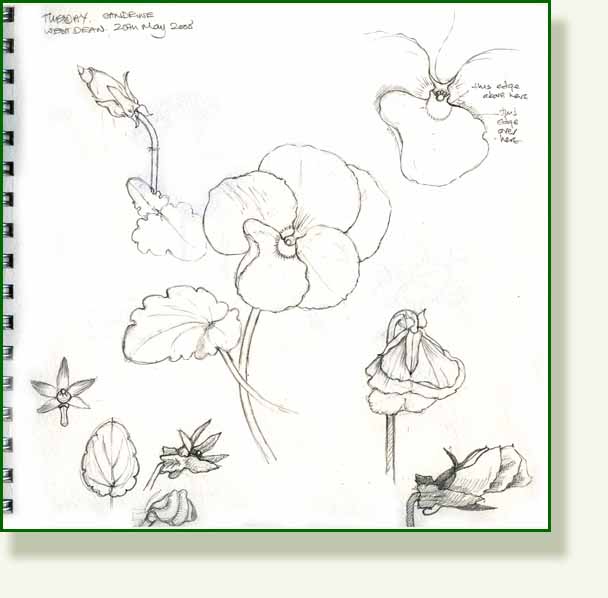 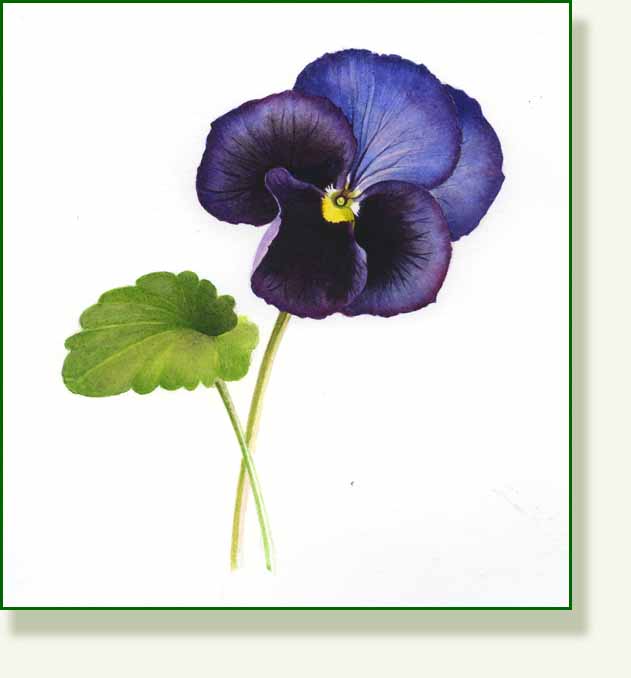 Today my first coloured flower. A pretty pansy from Kmart after the exotic, if a bit gruesome, carrion cactus.
How can you not be completely charmed by these delicate and exquisitely coloured flowers. Their serious little nodding faces giving them their name and meaning, from the French “pensee“, thought. We take them for granted in some ways because they are common and fairly hardy. There are a few struggling for survival in a nearby apartment block garden and I really want to rush out one night with a trowel and gather them all up for some TLC.

Modern pansies are related to the little blue violas which had been cultivated in Greece since the 4th Century B.C, mainly for medicinal purposes. The pansy, as we know it, was developed by Admiral Lord Gambier and his gardener William Thompson on the Gambier estate at Iver, Buckinghamshire in the 1800s. They crossed various violas gradually encouraging more pleasing patterns and larger blooms. The familiar blotch that gives the pansy much of its character was chance seedling which was developed into the variety Medora in 1839.
A darling of the Victorians, the pansy was celebrated in poetry, literature and the “Language of Flowers”. Giving a bunch of flowers would became a minefield of innuendo and be heavy with significance. I am sure that many a budding romance must have been stopped dead in its tracks by the inclusion of an inappropriate flower.

Of course flowers were metaphors for the human condition well before the Victorian era. The significance of Shakespeare’s references to flowers would have been easily understood by his audience.
Here is the wild pansy in Ophelia’s famous “garland” speech from Hamlet:

“There’s rosemary, that’s for remembrance.
Pray you, love, remember.
And there is pansies, that’s for thoughts,
There’s fennel for you, and columbines.
There’s rue for you, and here’s some for me;
we may call it herb of grace o’ Sundays.
O, you must wear your rue with a difference.
There’s a daisy.
I would give you some violets, but they withered all when my father died;
they say he made a good end.”

In “A Midsummer Night’s Dream” Oberon drops a potion of wild pansy onto the eyelids of the sleeping Titania, he asks Puck to assist.

“Yet mark’d I where the bolt of Cupid fell:
It fell upon a little western flower,
Before milk-white, now purple with love’s wound,
And maidens call it love-in-idleness.
Fetch me that flower; the herb I shew’d thee once:
The juice of it on sleeping eye-lids laid
Will make or man or woman madly dote
Upon the next live creature that it sees.” 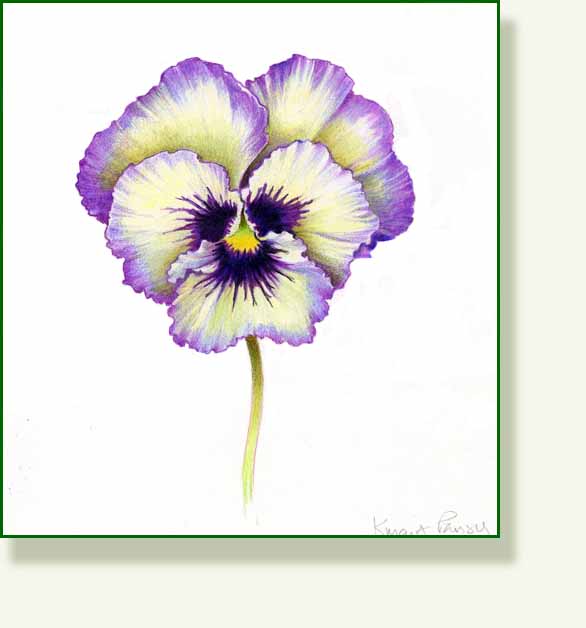