From Sweet Osmanthus tea yesterday, to Monkey Picked Tea today. It sounds so exotic doesn’t it, and thinking of the dexterity of a monkey, perfectly possible? This particular tea plant at Leu Gardens is Camellia sinensis var assamica . It’s the wild or long leaf tea which grows taller and has longer leaves then the regular tea camellia, camellia sinensis. It can achieve 30 to 50 ft, so more a tree than a bush which accounts for the legend and handy marketing story of the monkey picking. 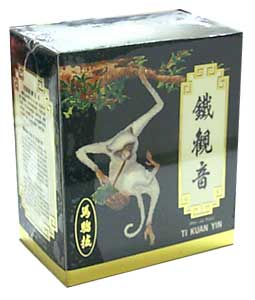 lovely packaging, but not sure from where as image was sent to me

There are different versions of the myth, one says a villager went to pick tea leaves in a mountain, and finding the most beautifully scented ones growing out of reach high on cliffs persuaded a monkey to pick the tea for him. Others say Monks in Anxi trained the monkeys to climb to the top of the tall wild tea bushes to pick the very finest upper leaves and buds.

This, from Kasora.com’s World of Tea tells more here 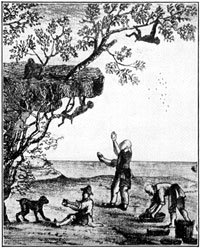 In 1793, writer Aeneaus Anderson, in the company of British ambassador Earl George Macartney, travelled to China in order, to find out, amongst other things, more about tea growing. The Chinese were guarded in giving out information.

“According to historian John C. Evans’ Tea in China: The History of China’s National Drink:
‘Questions not meant to be answered were met with blank, uncomprehending stares. Tea plantations spread out to the horizon on each side of the Imperial Canal but tea harvesting, processing, and even transportation were purposely kept from view. When information was volunteered, it had to be treated circumspectly.
Once a Chinese man spontaneously offered to explain how tea was picked. He told Anderson ‘Tea growers anger the monkeys living in the branches of the tea trees. Out of revenge, the monkeys tear off branches and throw them on the ground. In this way, tea harvesters only have to pick them up.‘”
Anderson truthfully admitted he had not witnessed the monkey-harvest himself although he nevertheless accepted the story as fact. All of Europe read Anderson’s book and the monkey tea-picking legend found its way to the West. This story had a particular appeal and fascination for the Victorians, no doubt due to the furor raised by Darwin’s theory of evolution.
For over a century, children’s schoolbooks contained the story, and several generations of adults were convinced that tea was actually picked by monkeys.

Mary Lou and Robert J. Heiss, specialty tea experts and writers of Teatrekker’s blog explore other possible reasons for the myth in their post Tieguanyin Anxi Monkey-Picked Tea as well as providing this lovely tea cup photo, complete with monkey 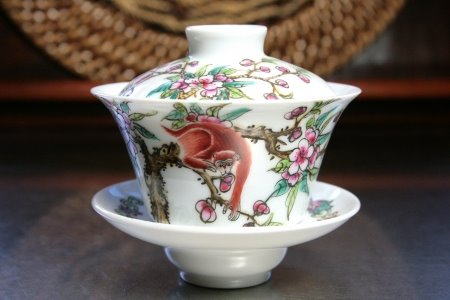 The involvement of the monkeys is still used to market teas. One supplier of Taiping Houkui Tea conjours up this analogy
“When brewed, the tea leaves, suspended or sunken, free themselves in the clear tender green water, like many a monkey vigorously stretching their neck and tails.”

Another supplier even goes as far as claiming that, despite the practice all but dying out, there is
“one small remote village where they still continue this remarkable tradition. No monkeys are harmed or mistreated in order for us to bring this rare brew to you!”

Well, it’s up to you if you believe it or not.. but why is there not one photograph or at least a well trodden tourist route to this remote village to see this wonder.. I can’t help but feel that if there were such a place, the dedicated tea enthusiasts would definitely have sought it out before now.
..its a shame in a way. 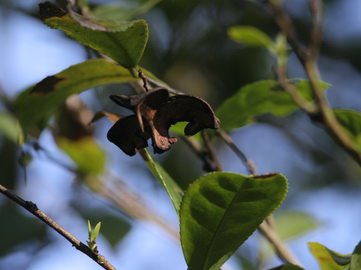 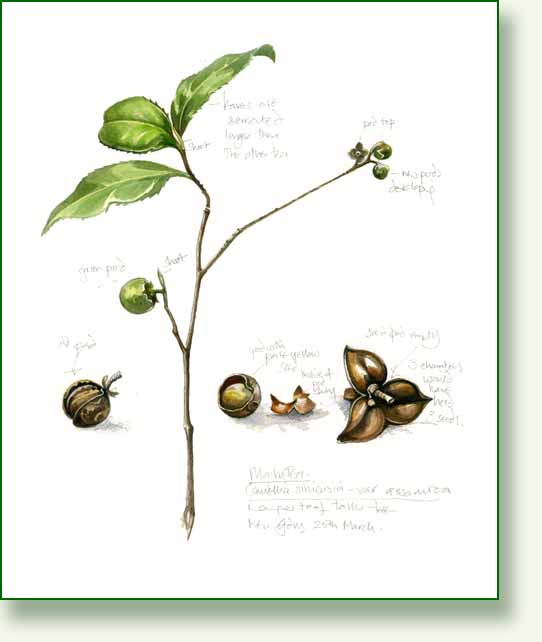 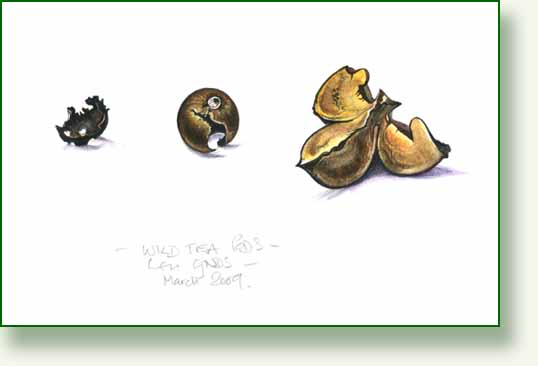