I think I must be the only person in the world who knew nothing at all until now about the odd phenomenon of the miracle fruit, so those bored by its story and tales of “flavor tripping” tune out now.
Today I decided to catch up on some of the backlog of plant names that I have recorded over the last few months and the miracle fruit tree Synsepalum dulcificum was one of them. I have walked past this rather sad little plant so many times, thinking to myself that if it produces anything at all, even a decent leaf it would be a miracle. I have waited for fruit, or a flower or just a bit of general joie de vivre.. but it just struggles on. This morning I thought I would look it up before I went to the gardens and I was not really prepared for such a strange story.

This very nondescript looking plant will produce, in the right conditions, small red berries which are the ” miracles” of the miracle fruit tree.
These berries have the curious property of being able to trick your mouth into experiencing bitter or sour tasting foods as sweet. The cause of the reaction is a protein called miraculin, which binds with the taste buds and acts as a sweetness inducer when it comes in contact with acids. 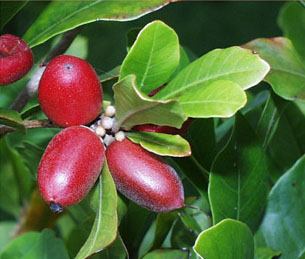 This astonishing fruit was first documented by explorer Chevalier des Marchais during a 1725 expedition to West Africa. Marchais noticed that local tribes picked the berry from shrubs and chewed it before they ate their otherwise bitter and sour foods.
Since then there has been sporadic excitement about its obvious potential but because of its short life span, it will only stay fresh for a couple of days, and seasonal production, it was difficult to develop viable business to any great degree.

Interest was revived in the 1970s and according to Wiki..
An attempt was made in the 1970s to commercialize the ability of the fruit to turn non-sweet foods into sweet foods without a caloric penalty, but ended in failure in controversial circumstances with accusations that the project was sabotaged and the research burgled by the sugar industry to prevent loss of business caused by a drop in the need for sugar. The FDA has always denied that pressure was put on it by the sugar industry, but refused to release any files on the subject. Similar arguments are noted for FDA’s regulation on stevia now labeled as a “dietary supplement” instead of a “sweetener”.
That is interesting because I have written about stevia ( sweetleaf) and its incredibly sweet leaves before.

Because of these problems the popularity of miracle fruit waned but it is now the subject of a smart-set renaissance with “flavor tripping” parties being held in appropriately smart settings with an appropriately smart clientele who pay $15 a berry and then have a kind of miracle fruit love-in .. I would imagine the word awesome gets a good airing.
According to participants beer tastes like mikshakes, limes taste like sweet oranges etc etc.

Amongst the hundreds of websites, blogs and commercial sites there is one very good and informative article entitled “The Old Sweet Lime Trick” from 1992, by Donna McVicar Cannon here
Here she describes how the “sweet lime trick” was played on
a founder of the Rare Fruit Council, William Whitman,

In 1952, he was being given a tour of the Panama Canal Zone Summit Gardens by the Director, W. R. Lindsay, when they encountered a five foot bush, covered with small, dark green leaves and attractive red fruit about the size of olives. Sampling a couple of the berries, Mr. Whitman found them rather nondescript, and they moved to the next specimen, a Key lime which Director Lindsay asserted was a wonderful and very rare sweet lime. After some urging to sample it, Mr. Whitman tasted this lime and found it absolutely living up to its advance billing—incredibly sweet and delicious. Only after eating several more of these delightful sweet limes did he finally ask for information.”
…and the article goes on to outline the various research and development attempts.

There is more about this fruit and others in the fascinating book “The Fruit Hunters: A Story of Nature, Adventure, Commerce, and Obsession. ” Go to DemocracyNow website here and read the interview with writer Adam Leith Gollner. I have seen this book at Borders for a while now and leafed through it .. I can feel a purchase coming on.

Its use as something other than party entertainment has much potential in making a wider range of nutritious but sour or bitter foods palatable to us sweet-stuff loving creatures and it is now available as a tablet from various suppliers. 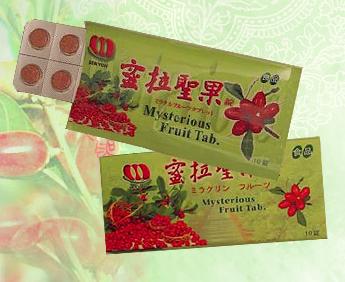 It is helpful as a dietary supplement for diabetics and slimmers but until they find something that makes lettuce taste like chocolate I am probably not that interested. I personally like a variety of flavours but I will be curious to try one and they are readily available as plants and berries here in Florida. According to Pedro someone right here in Winter Park sells them. It would be handy little plant to have on the balcony perhaps?

The one leaf I had today shrivelled up as I drew it, even in these currently chilly days, and I also spent far too long reading about this curious fruit. I am not sure if the little plant at the Gardens will survive but I was glad to see that someone has taken pity on it and given it some fertiliser, oddly enough this little sweetener prefers acid soil!
____________________________________________ 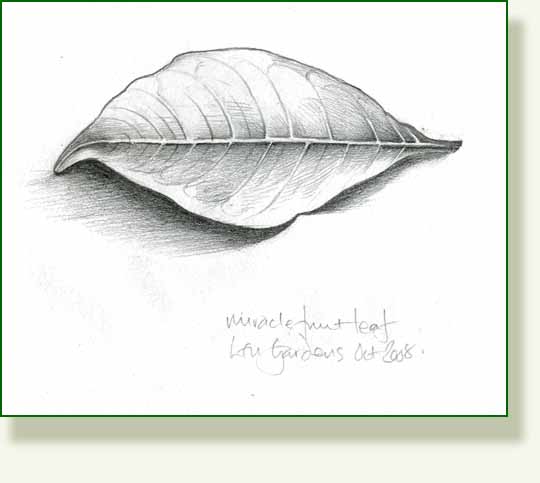 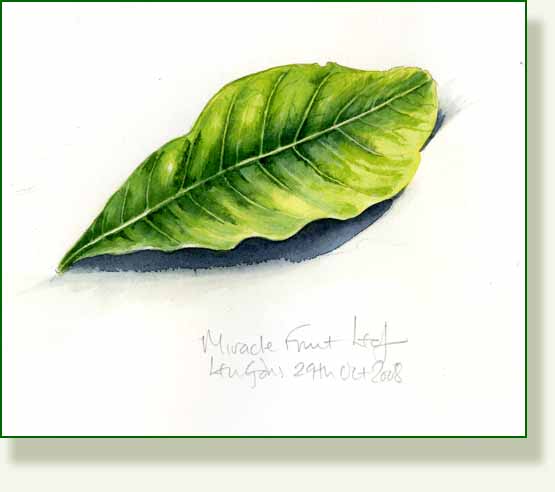