You would expect Darwin to have made some interesting observations about Bumble Bees, wouldn’t you?.. (called in his time “Humble bees.”)

Humble bees alone visit red clover, as other bees cannot reach the nectar. It has been suggested that moths may fertilise the clovers; but I doubt whether they could do so in the case of the red clover, from their weight not being sufficient to depress the wing petals. Hence we may infer as highly probable that, if the whole genus of humble-bees became extinct or very rare in England, the heartsease and red clover would become very rare, or wholly disappear. The number of humble-bees in any district depends in a great measure upon the number of field-mice, which destroy their combs and nests; and Colonel Newman, who has long attended to the habits of humble-bees, believes that “more than two-thirds of them are thus destroyed all over England.” Now the number of mice is largely dependent, as every one knows, on the number of cats; and Colonel Newman says, “Near villages and small towns I have found the nests of humble-bees more numerous than elsewhere, which I attribute to the number of cats that destroy the mice.” Hence it is quite credible that the presence of a feline animal in large numbers in a district might determine, through the intervention first of mice and then of bees, the frequency of certain flowers in that district!

from Chapter 3  “The Origin of Species”   Charles Darwin 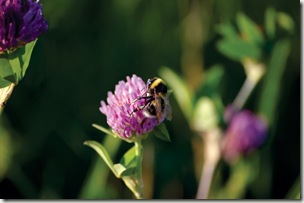 Bee on Clover by Kaspri from Shutterstock.com

Thomas Henry Huxley another eminent English biologist, and others went on to expand this idea, pointing out that the success of the British Empire really depended on “Old Maids”.
Why? .. because  soldiers eat roast beef, the beef cattle eat red clover, red clover is pollinated by bumble bees which, in a round about way are protected by cats. The cats eat the mice who prey on the honey and Old Maids keep cats, therefore the continuation of the British Empire was really dependant on cat loving elderly ladies.

It’s a nice thought and nice enough for A D Hope to write a poem about it. In “Clover Honey” from “A Late Picking: Poems 1965-1975”, the narrator is concerned about the number of spinsters in the locality but a friend puts him right. Here is part of it..

“Yes, yes, poor things!” he said, You have a heart
That does you credit, my dear. But let me say
That the great chain of being has found a part
In Nature’s scheme even for them to play.

You mentioned cats, I think. Each keeps a cat?”
“Good God!” I said “they have them by the score!”
“Indeed? Of course, I’m not surprised at that;
But cats catch mice_ Well, it’s what cats are for. “

Their mistresses at night will put them out
To hunt for field-mice_You begin to see
My drift, perhaps, since as you know, no doubt,
The field-mouse preys upon the bumble-bee.

These hirsute bees, and they alone contrive
To fertilize the dark-red clover blooms;
Although it is their smaller cousins who hive
The clover-honey that loads our Kentish combs.

So when we find_ what does the Bible say?_
A land flowing with milk and honey, we do
Not doubt, we naturalists, that there we may
Expect to find old maids a-plenty too.

The state of single blessedness, you see,
Is not without its talent: indeed, you might
Call spinsters partners of the honey bee
Bringer of life’s best gifts, sweetness and light.”

I am now thinking about the pose.The size of a bumble bee is due in part to the length of its hair, the hard body the exoskeleton is much smaller. A wet bumble bee looks skinnier .. think wet bedraggled poodle.  One endearing fact I have discovered is that bee hair is called “pile” as in a carpet, so is a bee carpeted with hair? 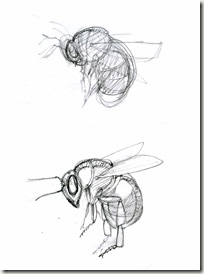 A quick colour sketch to get more of a  feel for this bee. 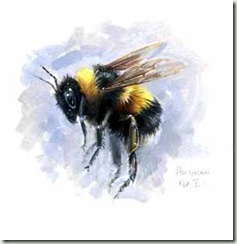